The Young and the Restless Spoilers: Will Sharon Give Rey a Shey Baby – Saves Fatherhood Dream After Mia’s Scheme Exposed? 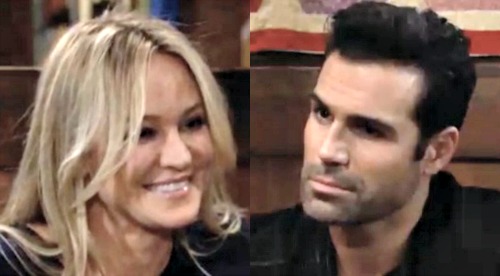 The Young and the Restless (Y&R) tease that some heartbreak is headed Rey Rosales’ way. Mia Rosales (Noemi Gonzalez) claims to be pregnant, but no one knows if that’s true or not. She seemingly paid a pregnant woman for the urine she used on that pregnancy test, but what would’ve happened if Mia had taken the test on her own?

Since Mia hooked up with Arturo Rosales (Jason Canela), this could easily be his baby. Regardless, the least likely option is that Mia actually has Rey’s bun in the oven. He’s made it clear that he’s done with Mia no matter what, so Y&R couldn’t get much drama out of it. They can get far more by making this Arturo’s kid or saying Mia made the whole thing up.

Of course, either of those possibilities would lead to mixed feelings for Rey. He’d be relieved about not having permanent ties to Mia, but he still won’t make his fatherhood dream come true. Rey’s always wanted to be a dad and was excited about this baby despite the issues in his marriage. He should be bummed about never getting the chance to raise kids of his own.

Now that Rey’s free to be with Sharon Newman (Sharon Case), he might enjoy bonding with Faith Newman (Alyvia Alyn Lind). However, she’s growing up fast and Lind seems too busy to be onscreen much. The Young and the Restless might even SORAS Faith one of these days. Whatever the case, a kid Faith’s age isn’t the same as starting from scratch with a baby.

Sharon has talked to Rey about his fatherly desires before. She assured him that he’d be a great dad and she meant it. Could Sharon make that dream come true at some point? It might even be something that Sharon does inadvertently. It’s tough to imagine Sharon trying for another baby at this point in her life, but she wouldn’t say no to Rey’s surprise one.

Rey and Sharon obviously have to make love first, but that’s surely coming. Once they’re rolling in the hay frequently, they’ll have plenty of chances to make kid together. The Young and the Restless spoilers say Sharon and Rey will face some exciting drama, so stay tuned to find out if a “Shey” baby fits in somewhere.

Would you like to see a little one for Rey and Sharon? Would you rather watch their baby-less relationship instead or even see them paired up with other characters? We’ll give you updates as Y&R news comes in. Stick with CBS soap and don’t forget to check CDL often for the latest Young and the Restless spoilers, updates, and news.