BY Heather Hughes on March 26, 2019 | Comments: one comment
Related : Soap Opera, Spoiler, Television, The Young and the Restless 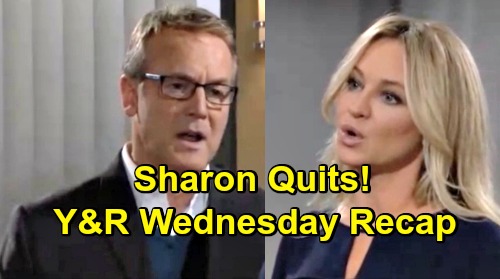 The Young and the Restless (Y&R) spoilers update and recap for Wednesday, March 27, tease that Devon Hamilton (Bryton James) will have a gift for Ana Hamilton. He’ll hand over a framed photo of her father, Jett Slade (Gilbert Glenn Brown), and insist that he wants to help. Ana won’t be looking for a handout and she’ll suggest Jett isn’t either.

However, Devon will still think Jett and Elena Dawson (Brytni Sarpy) could come live at the penthouse. He’ll decide to pay Jett another visit and make his pitch. The Young and the Restless spoilers say Jett won’t be interested at first, but Elena will give him a nudge. Devon will also talk about getting Jett the best specialists so he can sing again, but Elena will be wary of promises they can’t keep.

Jett will ultimately agree to move in, so Devon will be thrilled. Later, Devon will chat with Elena at Crimson Lights. She’ll talk about how she’s actually a doctor, but she had to drop out of her residency thanks to all her student loans. Devon will point out that Elena can save some cash by living with him at the penthouse. She’ll plan to get all their stuff packed up and moved in tomorrow.

At the police station, Paul Williams (Doug Davidson) will express surprise over the chaos Sharon Newman’s (Sharon Case) been involved in. He won’t be happy about her lies, but he’ll decide to let her stay in her position. Y&R spoilers say Sharon will opt to resign instead. She won’t think Rey Rosales’ (Jordi Vilasuso) firing was fair, so this will be her way of supporting him.

At the hospital, Lola Rosales (Sasha Calle) will approach Summer Newman (Hunter King) in her room. She’ll let Summer know that she’s grateful for her sacrifice, but she’ll be ready to move on. Lola will offer words of congratulations on the new marriage before she heads out.

When Kyle Abbott (Michael Mealor) appears, Lola will insist that he should be by his bride’s side. She’ll meet up with Rey, who’ll think Lola has to get back to her old life. Unfortunately, Lola won’t even be sure what her life looks like now. Without Kyle and the future they might’ve had, Lola will be feeling pretty lost.

At the Abbott mansion, Kyle will carry Summer over the threshold and find Abby Newman (Melissa Ordway) waiting with Champagne. She’ll mock Jack Abbott (Peter Bergman) for his sweet toast about love, so he’ll wonder if Abby and Arturo Rosales (Jason Canela) are having issues. Abby will note that their problems are behind them since she dumped Arturo and took a hammer to his truck.

Kyle will take a tired Summer up to her room, so she’ll be thankful for her new hubby’s attention. Soon after, Jack will allude to Summer being pregnant, but Kyle will come clean about the liver transplant deal. He’ll assure Jack that Lola is still the one he wants, but he loved her enough to do this for her.

Upstairs, Jack will confront Summer, who’ll defend the deal. She’ll think Kyle has always had feelings for her, so this agreement just convinced him to let them shine through. Back with Kyle, he’ll look glum as she sends Lola a text. After Jack returns, he’ll admit Summer is madly in love with Kyle. When Kyle notes that he doesn’t want to hurt his new wife, Jack will agree that’s the right call.

At Rey’s apartment, he’ll get Lola settled in and admit Arturo was the last straw in his marriage. Lola will hear the hookup news and worry about Rey, but he’ll be OK. Rey will contend that that punch he delivered was satisfying. They’ll discuss Abby’s truck destruction and how that must’ve left her feeling satisfied, too.

Lola will eventually get the text Kyle sent. She’ll read that he misses her, so she’ll begin to text back before changing her mind. It looks like Lola will stick to the plan for now and try to let go. Meanwhile, Rey will meet with Sharon, who’ll inform him she quit her job in protest of his firing. Rey will be impressed with the grand gesture, so he’ll suggest a date.