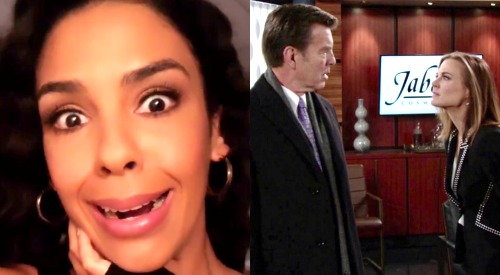 The Young and the Restless (Y&R) spoilers reveal that Kerry Johnson’s (Alice Hunter) run is winding down, but the drama’s about to heat up! Red flags have already been raised for Phyllis Summers (Gina Tognoni) and Jack Abbott (Peter Bergman), but they’re doing their best to ignore them. They both think they know the real Kerry, so they have a hard time believing she’d play dirty.

Nevertheless, it’ll quickly become apparent to Jack that something’s off. The Young and the Restless spoilers say some strange things will start happening around Jabot. Billy Abbott (Jason Thompson) may pass along updates to Jack and leave him fearful about Kerry turning on them.

Jack recruited Kerry to score intel and help them take Phyllis down, but he may worry that she’s giving Phyllis the upper hand instead. Phyllis will also grow increasingly concerned about Kerry and the intern she recently mentioned. As Phyllis’ suspicions about Kerry and Dominique Carroll grow, she just won’t be able to trust her so-called friend anymore.

Phyllis may figure out that a takedown scheme is brewing, but she won’t expect what happens next and neither will Jack. Kerry managed to play both sides with the help of a mysterious boss. It seems the jig may be up for Kerry by the end of the week. She might find herself backed into a corner and forced to admit she’s been scheming all along.

Of course, it won’t matter by then. Y&R spoilers say Kerry’s boss will already have pulled off a top-secret plan. Since Ashley will return for a two-episode stint on March 29 and April 1, it makes sense that Ashley will reveal herself as Kerry’s boss and explain her plot to the Abbotts. That also lines up with the big Friday cliffhanger that’s set to rock Jabot to its foundation.

On her Twitter account, Alice Hunter previously predicted that her last airdate would be before the beginning of April. However, there was a preemption a while back that threw the schedule off. Perhaps April 1 will mark Hunter’s last day. It makes sense that Kerry may leave with Ashley once their work is done.

Alice posted a short video (see below) on her Twitter account hinted that even she was shocked when she read the scripts for Kerry’s exit arc! The Young and the Restless fans can surely expect some unanticipated twists and turns over the next few Y&R episodes.

The Young and the Restless spoilers say Kerry will leave both Jack and Phyllis reeling, but maybe they’ll be more careful about who they put their faith in next time. You can never be too careful in the cutthroat corporate world of soaps! We’ll keep you posted as other Y&R news comes in. Stick with the CBS soap and don’t forget to check CDL often for the latest Young and the Restless spoilers, updates, and news.

Get READY #YR fandom!! I took this video on set right after reading the scripts for this weeks @YandR_CBS 🤯 Omg it gets good. As a fan, I miss this!! pic.twitter.com/9m9gIUJvEW