BY Heather Hughes on March 24, 2019 | Comments: one comment
Related : Soap Opera, Spoiler, Television, The Young and the Restless 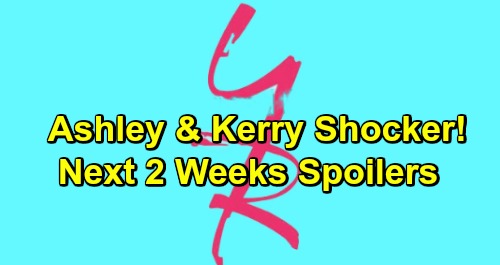 The Young and the Restless (Y&R) spoilers for the next two weeks tease that the drama will continue to heat up. During the week of March 25-29, Kyle Abbott (Michael Mealor) will face the task he’s been dreading. He’ll fill Lola Rosales (Sasha Calle) in on the deal he made with Summer Newman (Hunter King), so she’ll be heartbroken over his new marriage and “Skyle” sex session.

Later, Lola will check out of the hospital and rest up at Rey Rosales’ (Jordi Vilasuso) apartment. Once he makes Mia Rosales (Noemi Gonazalez) get her stuff out, he’ll have some extra space. The Young and the Restless spoilers say Lola will obviously be down in the dumps. Rey will do his best to comfort his little sis, but he’ll have problems of his own to deal with.

The cover-up crew will be rescued, but the revelation of Rey’s trap will get him fired. He’ll also find out about Mia and Arturo Rosales’ (Jason Canela) betrayal. That’ll lead to a violent outburst, which should leave Arturo with quite a shiner! Abby Newman (Melissa Ordway) won’t take the news of Arturo’s betrayal well either. She’ll smash his truck to smithereens and unleash her wrath on Mia, too.

Meanwhile, Victoria Newman (Amelia Heinle) will come face to face with J.T. Hellstrom (Thad Luckinbill) again – or at least it’ll seem that way to her. J.T. will startle Victoria at home, but this may be a terrible encounter in her head. If not, the cops really need to get a grip on this guy!

The Young and the Restless spoilers say we’ll also hear what’s wrong with J.T. this week. All signs point to a brain tumor, so that’ll be another shocker for Victoria. Over with Cane Ashby (Daniel Goddard), reality will hit him hard. He’ll have to deal with the facts of a situation, so a divorce might be in his future. Lily Ashby (Christel Khalil) may decide she can’t get past Cane’s kisses with Victoria.

Next, Devon Hamilton (Bryton James) will hope for peace. Things have been rocky with Ana Hamilton (Loren Lott) lately, but Devon knows the truth about her fake debt now. Ana was trying to help her ill father, Jett Slade (Gilbert Glenn Brown). Now that Devon’s in the loop, he’ll want to make amends and find a way forward.

Other Y&R spoilers say Ashley Abbott (Eileen Davidson) will return to drop a Jabot bomb. It seems likely that she’s in cahoots with Kerry Johnson (Alice Hunter). During the week of April 1-5, Ashley will wrap up her explanation and hit the road again. This will just be a quick trip to town.

Elsewhere, Nikki Newman (Melody Thomas Scott) will open up to Paul Williams (Doug Davidson). She may share a bit about everything she’s been through and how hard it’s been. The girls’ night gang should have their legal woes taken care of at that point, so Paul may support Nikki as a friend.

Of course, Rey will have more than friendship on his mind as he makes a grand gesture. He’ll make some smooth moves and hope he can win Sharon Newman’s (Sharon Case) heart. Finally, Billy Abbott (Jason Thompson) will grow increasingly concerned about Victoria. He’ll feel like she’s still struggling because of the whole J.T. ordeal, so he’ll want to help in any way he can.

It sounds like Victoria has a long road ahead of her, but at least she’ll have Billy in her corner. We’ll give you updates as other Y&R details emerge. Stay tuned to the CBS soap and don’t forget to check CDL often for the latest Young and the Restless spoilers, updates, and news.