BY Sean O'Brien on March 24, 2019 | Comments: one comment
Related : Soap Opera, Spoiler, Television, The Young and the Restless 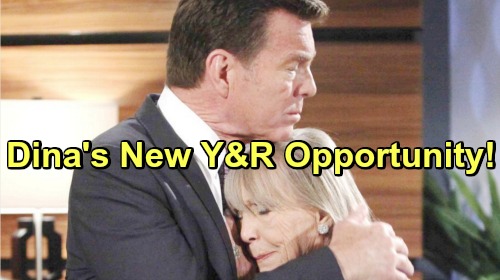 The Young and the Restless spoilers tease that part of Eileen Davidson’s (Ashley) brief return is linked to the reappearance of Dina (Marla Adams). Many Y&R fans were awed by Adams’ embrace of her character’s Alzheimer’s diagnosis in the recent past. Now, with Y&R writing Dina back in, fans are hoping the Abbott matriarch will be seen more often.

It’s fair to wonder what type of plots could be written for Dina, considering her condition. Well, just as loved ones are visited in their homes, at care facilities, and elsewhere on a regular basis and are therefore never forgotten, so too can Dina be incorporated into daily life at the Abbott mansion and beyond.

Rather than write her off as slipping away, let’s see more storylines where the evolving effects of this disease are addressed in creative ways. Doing so furthers viewer’s enlightenment and offers comfort to all daytime observers who are very familiar with Alzheimer’s.

Whether the My Beauty owner, who’s based in Paris, France, is in league with Kerry (Alice Hunter) will soon be seen. Hopefully, for all the Abbott’s, Ashley hasn’t been furthering a Jabot take-down plan.

With whatever business matters may develop, it would be great if Y&R is opting to use this chance to bring Dina back to daily life in Genoa City. Adams’ performances were so meaningful and memorable that viewers would surely benefit from seeing more of her work in future plots.

As Alzheimer’s is individualized within each person, it would be plausible to have Dina remain aware of her surroundings to the extent that she could continue interacting with family members in believable ways. At the same time, some of the more heart-breaking moments that this disease creates would inject a purposeful sense of reality into the Abbott family’s lives that would enable all of Y&R’s great actors to also deliver particularly important performances themselves.

As has been rightly noted by many and will be again here, Y&R’s choice to bring Adams back to the show, after many years of absence from the cast, was truly inspired. For this actor to have taken the meaty scripts she was given and to have used them to arguably deliver some of the greatest range of emotions in many years, from any character, was incredible. Let Adams have the opportunity to continue doing so indefinitely, as the audience and her colleagues will surely be uplifted by them.