BY Heather Hughes on November 23, 2019 | Comments: one comment
Related : Days of Our Lives, Hot News, Soap Opera, Spoiler, Television, The Young and the Restless, This Is Us 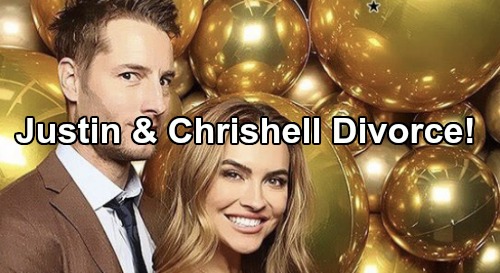 The Young and the Restless (Y&R) spoilers reveal that there’s some sad news to pass along. Y&R fans will remember Justin Hartley (Kevin Pearson on This Is Us) as the previous version of Adam Newman. The role is now played by Mark Grossman, but Justin was a fan favorite and is still missed by many viewers. He’s married to Chrishell Hartley (ex-Jordan Ridgeway on Days of Our Lives) – but apparently, not for much longer.

According to TMZ, Justin has filed for divorce. Their obtained court documents show that The Young and the Restless alum cites irreconcilable differences. This decision is a shocker since everything seemed perfectly fine between the couple last week. The Hartleys attended an event together on November 14 and posed for some cute photos.

Two days later, Chrishell shared a tweet that contained those photos and even joked with her fans about them. “Very sweet but I feel it’s important to point out that in the second photo, we were going for ‘awkward prom pic’ HA,” Chrishell said. Of course, things aren’t always as they seem in a marriage. It’s possible there were issues going on that they were just keeping private.

However, there’s also a chance something went down between then and now. Whatever the case, this is certainly heartbreaking news. Soap stars often find love since they understand the business and have a reason to bond. Justin got together with Chrishell through some mutual friends, and they dated for three years before he popped the question. They were married for two years, but now Justin’s opting to end that marriage.

Since the decision was so sudden, maybe it was a heat-of-the-moment thing that they can work through after everyone cools off. We were all rooting for the Hartleys to find lasting love! Nevertheless, if Justin and Chrishell can’t make it work, they’ll undoubtedly go their separate ways and find their own paths to happiness. Y&R fans and Days fans wish them the best no matter what.

UPDATE: TMZ reports that Justin Hartley listed the date of separation as July 8, 2019 in his divorce filing. Looks like the couple have been keeping their separation quiet until now. Justin listed ‘irreconcilable differences’ as the reason for the divorce filing. People, citing a source ‘close to the couple,’ claims that Justin is divorcing Chrishell because he is focused on expanding his career while she wants to settle down and have kids.