The Young and the Restless Spoilers: Zach Tinker Previews Fen’s ‘Powerful’ Comeback – What to Expect During Holiday Return Stint 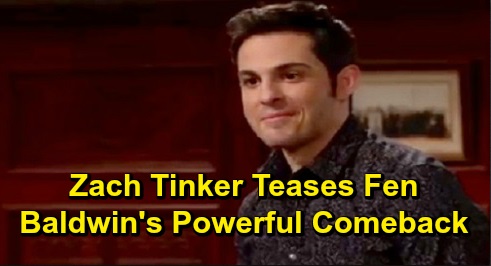 The Young and the Restless (Y&R) spoilers reveal that Fenmore “Fen” Baldwin (Zach Tinker) will return just in time for the holidays. Fen was last seen in February, but he’s still been an important part of the story offscreen. Adam Newman (Mark Grossman) found out Fen was back into drugs and used photographic evidence to blackmail Michael Baldwin (Christian LeBlanc).

Thankfully, Fen managed to avoid jail time and got the help he needed in rehab. Now Fen’s ready to come home and catch up with his loved ones. In an interview with Soap Opera Digest, Tinker opened up about his return stint as well as what he’s been doing during his time away from Genoa City. Although Tinker has had several great projects to work on, he’s always happy to be back at Y&R.

“Everyone was so welcoming and nice,” Tinker said. “It’s a big family over there and it really is like going home for the holidays.” We saw more of Fen’s fun side during his last run in GC, but Tinker was glad to go a little deeper this time. Fen’s drug addiction adds some complexity to the character, so Tinker was able to peel back a few layers in his upcoming scenes.

“I love playing complex characters who are going through tough times,” Tinker said. “I was really touched that Y&R gave me some great material to work with and I’m super grateful to [Head Writer] Josh Griffith and the other writers.” Look for Fen to share some heartfelt moments with his parents, Michael and Lauren Baldwin (Tracey E. Bregman). They’ll get updates on Fen’s recovery and undoubtedly keep giving Fen the support he needs.

Lauren mentioned that Fen was beating himself up a bit over the setback, so that’s something that may be explored. Addiction is often a lifelong battle, but it’s good that Fen’s been putting in the work and making sure he gets back on track. Michael and Lauren only want what’s best for their son.

“The first episode where Fen is back is a real powerful one and I hope fans like it because it meant a lot to me to come back,” Tinker said. He added that he’ll always be open to more The Young and the Restless stints. For now, Y&R fans can look forward to Fen’s latest return and all it has to offer.