The Young and the Restless Spoilers: Zach Tinker Returns – Fenmore Baldwin Back To Genoa City For The Holidays – What You Need To Know 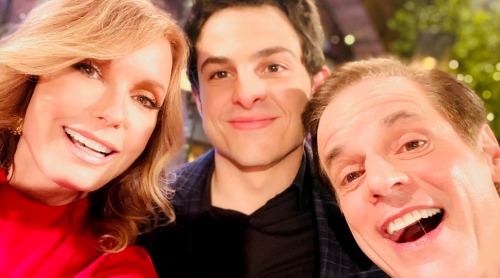 The Young and the Restless spoilers has some news to pass on about an upcoming return to the show. Zach Tinker will be returning to Y&R in the role of Fenmore “Fen” Baldwin later this year. Fen was last seen in Genoa City back in February 2019.

As Y&R viewers will remember, Fen ended up performing a hit song for Devon Hamilton’s (Bryton James) record label, under the direction of Ana Hamilton (Loren Lott). She wrote a song that she and Fen recorded behind Devon’s back, and there was quite the kerfuffle over who wrote the song. Ana later admitted that it was she who penned the song, and Fen ended up exiting canvas to go on tour.

Viewers haven’t seen Fen since, but his name has certainly come up on Y&R since. Adam Newman (Mark Grossman) wound up with photographic evidence of Fen doing and dealing drugs, which he used against Fen’s dad, Michael Baldwin (Christian LeBlanc). Adam was on a push to get Michael to do his bidding, and he threatened to turn Fen in to the cops if Michael didn’t comply with his demands.

Of course, this was terrible for Michael, given that he had just been elected as Genoa City’s District Attorney, but it was also bad for Fen, who Y&R viewers know has previously struggled with addiction. It was unclear whether Adam actually orchestrated the whole drug situation with Fen in order to get to Michael, or whether Adam just capitalized on an already occurring situation, but either way Fen was in trouble.

From there, Lauren Baldwin (Tracey E. Bregman) rushed away from Genoa City to find Fen and get him into rehab. The last Y&R viewers heard, Fen was safely ensconced in rehab, but whether he completed his stint and was successful in turning things around remains to be seen.

At any rate, it appears that Fen will return home for the holidays and reunite with his parents. The Young and the Restless posted a photo of Tracey E. Bregman, Zach Tinker, and Christian LeBlanc looking happy and smiling big with the following caption: “It’s beginning to look a lot like Christmas! Fen and @ZachTinker are home for the holidays!”

That’s great news for Fen fans, and viewers should soon learn the backstory about what happened to get Fen back into drugs and the state of things for him now. Are you looking forward to seeing Fen back in Genoa City? Stay tuned to the CBS soap and don’t forget to check CDL often for the latest Young and the Restless spoilers, updates, and news.

It’s Beginning to Look a lot Like Christmas! Fen and @ZachTinker are home for the holidays! #YR pic.twitter.com/O5zuLUHagQ