BY Dorothy Gale on November 12, 2019 | Comments: Leave Comments
Related : Recap, Television, This Is Us, TV 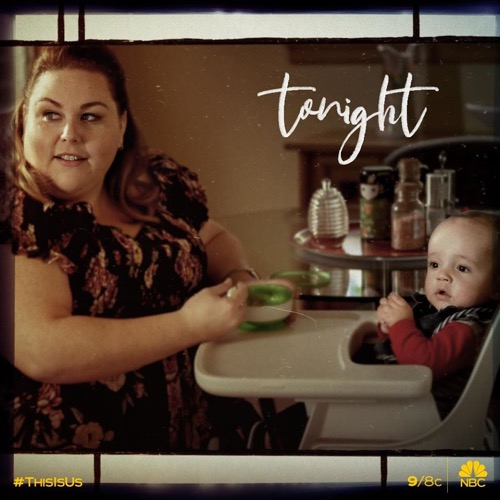 Tonight on NBC their honest & provocative dramedy series This Is Us airs with an all-new Tuesday, November 12, 2019, episode and we have your This Is Us recap below.  On tonight’s This Is Us season 4 episode 8 called, “Sorry,” as per the NBC synopsis, “Rebecca visits Randall in Philadelphia. Beth is troubled by a request from Deja. Kevin has doubts about himself.”

The doorbell rings and it is Kate’s boyfriend, the kiss, Randall doesn’t seem impressed and Kevin walks into the kitchen and joins Rebecca. Kate, her boyfriend, and Kevin leave the house. Randall asks Rebecca what Kate sees in that guy – she is just happy that Kate is happy. Rebecca vents to Randall the mortgage company is eating away at the insurance, he offers to help her with her resume.

Present-day, Kevin is in bed, he is thinking back to when he was a little kid and his father was alive. Then, Cassidy gets up to leave after sleeping with Kevin, then she doesn’t show up at AA for a week.

Kate is feeding the baby, she wants him to eat and he won’t, Toby thinks that maybe he just doesn’t like bananas. Toby has to leave for work, he gives kisses and leaves.

Nicky can’t find Kevin, he calls Cassidy and tells her that since they slept together Kevin hasn’t been himself and now he has disappeared.

Back to Rebecca going on an interview after Randall helped her with her resume. Fast forward to Randall the Councilor, he brings Rebecca to the office and she is very proud to see where he works. Rebecca goes to the restroom and Randall sees the man who interviewed her tells his secretary to get him some more applicants. Randall goes to his office, introduces himself, tells him that he was adopted, his father was killed from saving his family from a house fire. The man tells him that he is a great kid, but his mother doesn’t know how to use the software. Randall says he can teach her, he is an expert at all software.

Kate is outside with the baby, she knocks on her neighbor’s door for their walk – he tells her that he is having a bad morning.

Kevin is at a bar, downing club soda. He hears a man behind him telling his friend that he sucker-punched hockey great Sidney Crosby for dropping wine on his wife’s dress. Kevin turns around and says there is no way that happened, the man asks him if he is looking for trouble. Kevin says no, trouble always finds him like a human wrecking ball. Kevin asks the man if he loves his wife, he says yes, then he asks if she loves him, he says yes. Then, Kevin says he bets he can get his wife to take off her clothes in twenty minutes. Kevin then bets him $10 that he can get her out of her wine stained dress within five minutes of meeting her, the man hits Kevin square in the jaw.

Randall and Rebecca enjoy a meal at his office, he asks her about life in LA, she says it is lovely. She looks at her purse to find her phone and can’t find it. Rebecca is upset, she can’t find the phone, she gets up, Randall tells her to be calm, he will call it. She shows Randall photos of his nephew on the phone.

Deja and Malik have a date at the house, they are talking and get into a romance. Deja runs upstairs and Beth is in the house, she goes to see her – Deja tells her to tell Malik to leave. At the door, Malik tells Beth the argument was about Deja’s mother, she wants to see her.

Kate is at Gregory’s house, she makes him a coffee and he thanks her for coming by.

Kevin is walking down the street, Cassidy drives up and finds him. Kevin has a black eye and bruised face, she asks him if he drank, he says he thought about it, but no. Nicky is there as well, he was with Cassidy, he tells Kevin it is hearing date and is upset that Kevin looks beat up and he is supposed to be a character witness. Nicky tells him to forget it. Kevin tells Cassidy when you are little sorry makes it all go away, but when you are older it means nothing.

Cassidy is putting medication on Kevin’s wounds. She tells him that he didn’t ruin her marriage, she did and she signed the divorced papers. Nicky walks in, he is dressed up for court.

Kate is still with Gregory, he feeds the baby guacamole, Kate is thrilled that he ate it.

Nicky is in court, Kevin walks in and fixes his tie for him. Kevin goes to the back with Cassidy, just then the judge walks in, the clerk says all rise.

At home, Kate is with the baby and Toby comes in, he went shopping for food. He sees avocado on the counter, Kate says they are from Gregory’s tree. Toby feeds some to the baby and is thrilled when he eats it, Kate doesn’t mention that he already tried it at Gregory’s house earlier that day.

In court, the judge asks him if he feels remorse for what he did, Nicky says not really. Nicky says throwing the chair throw the window, it got him to AA and it put his nephew back in his life. For 40 years he pushed people away because he is broken, and he was wrong, he wasn’t broken, he was sick. And when you are sick, you have to let the people who care about your help. The judge tells Nicky that she will sign off on the diversion as long as he stays in treatment.

Deja apologizes to Malik, he says he is sorry too. Beth goes to the pantry and tells them they will be unsupervised for the next 30 seconds, they kiss. Beth and Deja are watching TV when Rebecca, Randall, Miguel and the girls walk in.

Kevin drives Cassidy to a diner where her husband is having dinner with their son. She thanks Kevin for being a friend and tells him that she hopes he finds his happy ending.

Back to Rebecca and the job, she got it. She then asks Randall what he said to Mr. Simons for her to get the job. Fast forward, Randall tells Rebecca that she doesn’t seem like herself – she says Miguel calls them senior moments. He tells her that he wants to call a doctor to see if she is ok, she get upset and says no. When he tries again, she says she is the mother and he is the son.

Kevin pulls up to the trailer and tells Nicky that he should go to Philly with him, the family would love to see him. Often when Kevin looks as Nicky, he sees his dad.