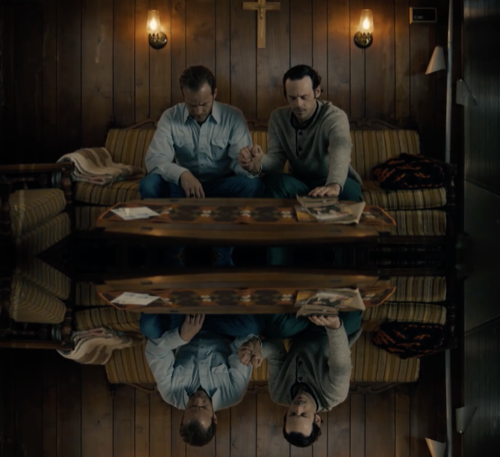 Tonight on HBO their crime drama True Detective airs an all-new Sunday, January 27, 2019, season 3 episode 4 called, “The Hour and the Day,” We’ve got your True Detective recap down below! On tonight’s True Detective season 3 episode 4 as per the HBO synopsis, “Hays and West see a possible connection between the local church and the Purcell crimes. As the detectives search for one suspect and round up another for interrogation, Woodard is targeted by a vigilante group.”

Hays and West enter the local church. They speak to the priest, they see a photo of Will with his eyes closed and his hands in prayer, the priest says he took the photo. Hays asks if the priest spoke to the parents outside of the youth group. He says he remembers Julie being excited about an aunt that was going to visit, Hays find it is strange because Julie doesn’t have an aunt. West shows the photo of the doll, the priest says that Patty Faber makes them for the fall fair. The priest goes on to say the kids were sweet and they looked out for each other.

Hays and West leave, they are in the car and West says he doesn’t like the priest. Hays thinks the boy got in the way, it was all about the girl.

Next, Hays and West head to see Patty Faber, she says one man bought ten off her at the fair, but she didn’t recognize him, he was black with a dead eye. The man said that he had nieces and nephews that he was buying the dolls for.

We fast forward to the time of the deposition and Hays tells his wife that they are re-opening the Purcell case. The two get into an argument, the children are in the other room and overhear the argument. The two go upstairs, have sex, and the argument is over.

Back to Hays in West, they are driving around town after leaving Patty’s house. They head to the liquor store and speak to the clerk, he has seen the guy with the dead eye, he gives them his address. They head to his house and find their man. West asks if he bought some dolls at the fair, he says no. All of a sudden, the man’s neighbors come around and a shot rings out. Hays and West head inside with Mr. Whitehead, continue to ask questions. They head outside to leave and find their windshield smashed. West doesn’t react, he tells Hays that if they were white people he would have done something.

We fast forward to the older Hays, he goes to the police station to see his son who is a police officer there. He has a book in his hand, tells his son he has been writing things down about the case.

He tells his son he found a couple of details that he wants him to look into. A few people that he would like to know what happened to. His son really doesn’t want to do it, but Hays tells him this is his way of staying alive and he needs the answers.

Back to the time of the deposition, Hays is with West in his office when the Attorney General comes in and tells Hays that he hopes that West bringing him back will redeem his career.

West and Hays leave Mr. Whitehead and head back to the church. The service is over, Hays speaks to the priest while West goes to speak to a woman who came out of the church.

Hays and Amelia are having dinner and she asks him if he ever thought maybe Will Purcell’s death was an accident, then she apologies for talking about work with Hays at dinner. Hays starts to talk about the case, he says the children were meeting someone in the woods, who gave them toys and that is where his body was found. Amelia changes the subject, she asks him about his family. They start flirting with each other, and Hays apologies for overstepping. Amelia asks him when was the last time he had a girlfriend, he says he can’t remember and they don’t last for long.

It’s raining, West enters a bar, and goes in the back where he finds the Purcell dad, he was causing a ruckus so they called West. West takes Purcell out of the bar and drives him home. Purcell says he can’t be in that house, every inch is the children, he can’t sleep there, he just wants to die. West says that he got a couch for him or a jail cell.

West is home, Purcell is on his couch.

We fast forward to West speaking to his team, along with Hays, as they reopen the case. He announces that the mother Lucy is dead, she overdosed in Vegas years ago. West tells everyone to get to it.

Forward again, this time to the older Hays, he goes to see the reporter who was interviewing him. He asks if she would like to talk to him some more. She is on board, he tells her that he wants to know why she is doing this, he wants to know her whole story. Maybe, there are pieces she can add to help him with the case. He tells her that if she sees his son, she shouldn’t mention that he was there.

The next morning, after Purcell sleeping on his couch, West heads to the station with Hays. They go over the facts again with some of their colleagues, who tell them that the prosecutor is going on Donahue.

Hays and West watch the Donahue episode, just then the Attorney General comes in and says they have a lead on the bike, Freddy Burns.

Amelia has a box, she knocks on the Purcell door, the mom answers, she tells her that the things belong to the children, she wanted to bring them home. Amelia tries to offer her support, Lucy tells her that she has the soul of a whore.

Amelia tries to comfort her. Lucy tells her that it was a very happy home, children should laugh and there wasn’t a lot of that in the house. Lucy says she ran around on Tom. Lucy says she has a 38 revolver in her purse and no courage to use it. Lucy takes a plate out of the box that is painted I love mom, she says she has done bad things and asks God’s forgiveness. Amelia tells Lucy that if there is anything she hasn’t told the police lately, she can tell Hays. Lucy gets mad, she tells Amelia she is just trying to work her to do something for her cop boyfriend. Lucy starts shouting and throws Amelia out.

Woodard is walking down the street and talks to two girls about leaving some soda cans for him, he gets two cents a piece for them. A man from his kitchen window sees Woodard talking to the girls and is furious.

Hays and West are looking at surveillance of the pharmacy where Lucy’s fingerprints have shown up.

The older Hays is hallucinating about the case and Vietnam.

West and Hays are in the station to interrogate Freddy. Hays tells Freddy that his prints were on Will’s bike. He claims that Will was bugging them, he was looking for his sister, he went off into the woods. He claims to have been drunk and he didn’t touch the boy, he just fooled around with the bike.

Hays keeps going over the video and finally finds the girl.

Woodard is walking down the street when he sees three pickup trucks coming towards him and he senses they are coming after him. He takes off his shows and makes a run for it. He arrives home, takes out an assault rifle and prepares himself.

Freddy is crying, an officer alerts Hays and West that something big is going on at Woodard’s place. The two arrive, a gunshot goes off.