BY Heather Hughes on December 27, 2019 | Comments: one comment
Related : Soap Opera, Spoiler, Television, The Young and the Restless 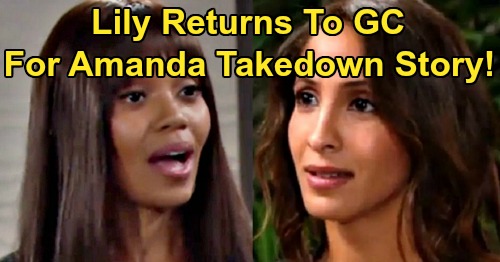 The Young and the Restless (Y&R) spoilers tease that Lily Ashby (Christel Khalil) is headed back to Genoa City. During the week of January 6-10, Lily will come home for a visit. What will be the reason for Lily’s decision to pop back in town? She usually has a motive of some sort, but perhaps it’ll mainly just be concern about Devon Hamilton (Bryton James) and how he’s holding up.

Y&R fans know Devon’s had a pretty rough year. Of course, Devon was forced to deal with the loss of Neil Winters (Kristoff St. John). He was already dealing with the loss of Hilary Hamilton (Mishael Morgan) in 2018, so Neil’s death stirred up another round of heartbreak. Devon was drowning in sadness for a while, but Elena Dawson (Brytni Sarpy) helped him climb out of the darkness.

Unfortunately, Devon seems to have traded that darkness for a different kind. He got duped into signing over billions to Cane Ashby (Daniel Goddard), but Colin Atkinson (Tristan Rogers) took the money and went on the lam. That left Devon feeling like a sucker – and the fact that Hilary’s doppelganger was involved didn’t help matters.

Amanda Sinclair’s (Mishael Morgan) lingering presence in Devon will continue to affect him a great deal. It seems like Devon traded most of his despair for resentment and even some confusion. He’s struggling to process his hatred for a woman who looks like someone he loved very much. The Young and the Restless spoilers Devon will keep up his efforts to get Amanda out of GC, so where does Lily come in?

Lily may get the scoop on Amanda’s file and all the suspicious elements of it. She might surprise Devon and Elena by defending Amanda. Lily could offer a fresh perspective and urge them to consider that maybe Amanda’s a victim, not a villain.

Devon and Elena definitely don’t know the full story when it comes to Amanda’s background. She’s clearly on the run from her abusive ex-fiancé, Ripley Turner, but Devon and Elena don’t seem to grasp that this could still be an incredibly dangerous situation.

It’d be nice if Lily could open their eyes to that – and she’d be in the prime position to. Lily’s undoubtedly talked to lots of inmates who were stuck in abusive situations as well. She may have a different way of looking at the facts of Amanda’s case.

Lily could also reveal if she’s been in touch with Cane. Where is Cane now and how’s the money search going? Lily might have some updates to pass along. She’ll definitely want to check on Devon and hopefully help him get 2020 off to a better start.