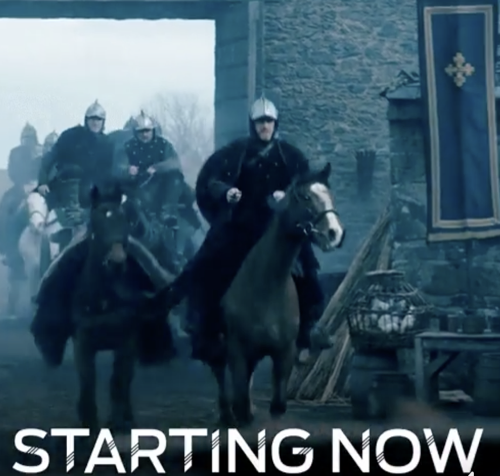 Tonight on the History Channel Vikings returns with an all-new Wednesday, January 02, 2019, season 5 episode 16 called “The Buddha,” and we have your weekly Viking recap below. On tonight’s Viking season 5 episode 16 episode as per the History synopsis, “Bjorn achieves one of Ragnar’s dreams; back in Kattegat, Ivar hatches a new plan while preparing for a divine arrival; in Iceland, a settler returns in a terrible state; and King Alfred faces his greatest threat yet.”

Vikings begins tonight with Lagertha (Katheryn Winnick) staring at Bishop Heahmund’s (Jonathan Rhys Meyer) corpse and the battle raging around them. Bjorn (Alexander Ludwig) returns to Torvi (Georgia Hirst) and Ubbe (Jordan Patrick Smith), saying no one has seen Lagertha and if she is still alive, she has vanished.

King Alfred (Fredia Walsh-Peelo) gives Bjorn the treaty that his grandfather had promised Ragnar (Travis Fimmel). He warns them there are farmers around the settlement, but wants them to be wary, promising to protect them. He seals the treaty, welcoming them formally as allies and as friends. Ubbe stands behind King Alfred, saying business isn’t done as he orders his guards to arrest the traitors; Judith (Jennie Jacques) seems pleased as Aethelred (Darren Cahill) watches in shock.

King Harald Finehair (Peter Franzen) tells the furious Vikings to trust in their leaders, but he is told he will not give second chances to fools and failures; shoving Harald. He tells them he will live and learn as they begin to slaughter people, with Magnus (Dean Ridge) by his side. He announces who Magnus is and with him by their side, they will accomplish great things, begin with the city of York. He promises they will take over the entire empire with Ragnar’s son by their side; everyone cheers.

Bjorn confronts Gunnhild (Ragga Ragnars) about fighting with King Harald. She says her husband was killed in battle as Bjorn reveals he lost his mother in the battle and tells her he is Bjorn Ironside. He says he could take advantage of her, but they are equals. He will cut her ropes if she can tell him Lagertha left on her own or against her will; she is unable to help him. He cuts off her binds, saying she is a free woman and can do whatever she’d like. She slaps him, saying she was exercising her right of freedom and tells him he can leave now.

Bjorn worries about what happened to his mother, wondering how she just disappeared. He insists that Lagertha doesn’t just run away, right in the middle of a battle. He doesn’t even know why he is talking to Ubbe, who didn’t even like her after she killed his mother. Torvi feels Lagertha has simply come to the end of reason. Judith is concerned about Alfred, who has already forgiven his brother. She insists that he has to tell the truth before he can forgive him. She needs to know why asking if she can speak to him so she can perhaps forgive him too.

Outside the traitors are hung on public display while Aethelred looks on with disgust; dozens of men lay dead after being hung.

In Iceland, Floki (Gustaf Skarsgard) and the others are trying to eat the rotten food, when Kjetill Flatnose (Adam Copeland) finds Helgi (Jack McEvoy) close to death. He reveals everyone has died or is dying. He begs them to save his family, even though they don’t deserve it. Floki heats up his axe as he cuts off Helgi’s frostbitten fingers.

Aethelred joins Judith, who says the Lord has confessed everything. He admits he was still angry about losing the crown to Alfred and he did agree to go along with the coup. Judith confronts him about being involved, even though he refused in the end. He promises he will never betray Alfred again.

Hvitserk (Marco Ilso) walks through the village where he finds a statue of the Buddha; he is told it isn’t a god but Buddha. When he asks who Buddha is, he is laughed at. Meanwhile, Ivar (Alex Hogh Andersen) reveals Harald was defeated by Alfred with the help of Lagertha and Ivar feels now is the time to return to England. Ivar explains that when he was in England with Ragnar, he played chess with Alfred and now he wants to again, except now he wants it on the battlefield.

Mass is held in England, as Ubbe and Torvi, along with Alfred accept communion before they head off to their new settlement. Ubbe tells Bjorn to look at this treasure as he holds the rich soil in his hands.

In Iceland, the Northern Lights are bright and beautiful as Floki talks to everyone, including Helgi about his family’s betrayal. He pleads for them to help them anyway, but Floki feels their settlement is starting to work and now they want to bring these people back who won’t listen. Helgi assures him that his family has learned his lesson and has changed; reminding him that is the whole reason they went there in the first place.

The church bells ring, led by Alfred. Bjorn and Gunnhild refuse to go inside as they worship a false god. Once alone, Bjorn talks about losing Ragnar and Lagertha, yet this is his father’s dream right here. He finds it strange that this is what his father wanted for them as he stares at the church. Gunnhild joins him at the window, reassuring him that everything will be all right, and they begin to kiss.

Guards rush in with King Alfred lying in the cart. Judith orders them to fetch the physicians and everyone else to leave. Ethelfled (Ann Skelly) reveals she believes she is with the child but they are interrupted when Aethelred comes in, insisting his brother must live.

Hvitserk enjoys his sex with Thora (Eve Connolly) as he holds the Buddha, not really knowing what that means. The following day, Ivar speaks to Hvitserk that they will wait until the Spring to head to York as he wants to wait for the birth of his divine child. Ivar worries about how cynical Hvitserk has become and shows him that Freydis (Alicia Agneson) looks more like Freya every day, the goddess of fertility. Ivar feels Hvitserk is a little crazy, just like Margrethe, reminding him what happened to her.

Bjorn feels they should have made a sacrifice, and ask the gods for their blessing on their new lands. He is furious that Ubbe and Torvi wear the Christian cross around their necks and feels he has to do something for himself, but when asked he tells Gunnhild he wants to take Kattegat back from Ivar. He says King Harald has an army and will persuade him to help. Gunnhild says Harald plans on attacking Kattegat anyways, so either he will side with Bjorn, or kill him.

Floki talks to Flatnose, saying he will leave the decision to him. Flatnose says he must live with hope for the future of his family; saying they must try to save them, believing Helgi is telling the truth about his father and if necessary he will carry Eyvind (Kris Holden-Ried) on his own back. Several of them travel through the wretched weather and torturous terrain to find his family.

Bjorn informs Ubbe that he has made up his mind to try to regain Kattegat, but Ubbe says they need to stay there and defend Ragnar’s dream. He feels they are all going to follow his dream, just in different ways. Ubbe calls him his brother and hero as Bjorn tells Torvi he knows she has always looked after their children, never spiteful nor revengeful. She admits she loves Lagertha, believing she is alive and a survivor like him. She promises she loves their children and will always make them proud of him. He thanks her and leaves.

The Lords gather as Judith talks about the King’s collapse, promising he will recover. With Aethelred at her side, he says Alfred has suffered these attacks before and has survived. When questioned on not being able to afford a sick king, Aethelred talks to them to trust him; Judith worries about how popular Aethelred has become. She confronts him as he pulls her down, demanding she doesn’t question what he says and to make some porridge for his poor, sick brother.

Judith wanders through the forest collecting mushrooms and makes her own concoction with them. Meanwhile, Aethelred finishes having sex, where he says if his brother dies that he will become king. She laughs and hopes that Alfred dies, leaving Aethelred smirking.

Aethelred learns there is no change in Alfred’s condition, sharing she has made some potions in the hope it will ease his suffering like before. Aethelred says she is a wonderful woman, as she says she knows at least she knows how much he cares about his brother. She says the nobles are not real Christians, with no charity in their souls as they simply want to get rid of Alfred. He admits it is true but she should understand their fear for Wessex and England.

Aelthered suddenly is unable to breathe and holds his throat. Judith says she completely understands but surely they can see Alfred is ever strong and if they care about Wessex and England, they must care about Alfred. She doesn’t believe Aethelred ever accepted Alfred as king and never would. She thinks he will always be a danger to him. Aethelred realizes she has poisoned him, demanding to know what kind of mother is she. He smashes his head on the table as he falls to the ground.

Harald watches as Bjorn and Gunnhild talk very intimately; not too pleased. A mournful Judith holds her dead son in her arms as she weeps.