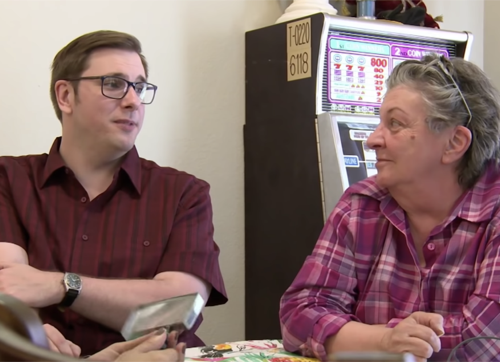 Colt and Deb make a special rum drink to watch their past episode. They toast to the episode when Colt and Deb go to Brazil. In the episode, Deb meets Jess and sees she is a voluptuous girl. Jess jokes that Colt has bigger boobs than her. In the car, Deb is annoyed when Colt and Jess kiss, a lot. Deb says she was just tired in that episode. Colt realizes his mom can get cranky. Alexei and Loren think there isn’t a girl who will get along with Deb. Deb laughs.

Kalani watches her episode alone. Asuelu is out. It is the episode featuring Oliver’s birthday when she and Asuelu were fighting. He wouldn’t come out of their room. Kalani heads to celebrate at her family’s home. She has to explain that he didn’t come because they had a fight. Kalani’s dad has a pep talk with Asuelu. He tells him to man up, it’s his son’s birthday. Asuelu finally shows up. Kalani reads tweets about Asuelu wearing a grave digger t-shirt. Molly thinks he needs to go home. She is sick of him. Kalani agrees with her comment, she is sick of him too.

After spending some time with her grandkids, Angela sits to watch a past episode. Michael tunes in at his home. The episode shows Angela arriving in Nigeria when she tries to find her luggage. A fan tweets that Angela and Michael’s reunion is lukewarm. She says it was very hot. Michael says he really missed her and he is happy to see her. She laughs, saying he just wants sex. Tim thinks she wants it more. Angela laughs. After arriving at Michael’s, Angela shares she doesn’t like the bed. It is hard. He needs to fix it. Annie thinks they could have boom boom in the kitchen then. Angela then sees a dead rat. She freaks out and screams after he teases her with it.

Liz and Andrei watch the episode when she visits with his family. Annie wonders why Andrei isn’t translating. Liz is annoyed he changed some of the translation when he did help them understand one another.

Loren mocks Andrei. He thinks this isn’t a good impersonation of him. Liz returns to telling him she was annoyed with him then. Liz is also annoyed that he is acting so macho. Alexei and Loren are beside themselves. Liz reminds him that he lives in America now and is a stay at home dad. She is the breadwinner.

Deb and Colt top off their drinks as they continue their episode. In the episode, Colt gets one room with two beds for his mom and him to stay in Brazil. Jess is annoyed. They read funny tweets about Deb’s first day out of the country and how tired she is and wants to go to bed. Deb laughs now but at the time she just wanted to get rid of them and rest. Jess cannot believe he wants to stay with his mommy. The others laugh. He was just being cheap. Colt reads a tweet, saying his mom needs a man. Deb wouldn’t mind a man. Jess reads a tweet calling Deb a “Debbie Downer.” Now she understands the phrase.

Angela checks on the kids before returning to the show. Michael doesn’t want to rewatch this part of the episode when he brings Angela to meet some ex-pats. Michael starts to sweat when she sits down with the women. She thought they were meeting men. Alexei thinks she got jealous right away. Angela says she wasn’t jealous. In the episode, Angela tells Michael there will not be a marriage.

She screams for him to take her home. Cynthia and Molly think that was a bad idea. He ambushed her. Angela thanks the ladies for their support. Angela laughs reading tweets about trusting other women with her man. In the car, Angela tells him to go to hell. Annie laughs. Michael was hoping the women would convince her to move to Nigeria. Angela more tweets about not trusting her man that make her laugh.