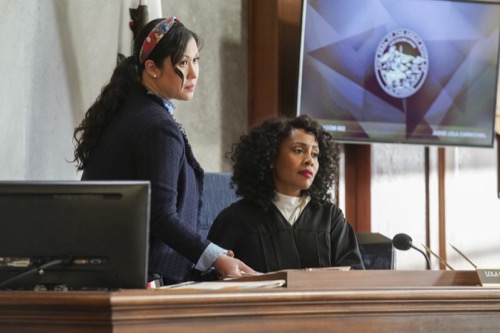 Tonight on CBS their new series All Rise airs with an all-new Monday, March 9, 2020, season 1 episode 17 called, “I Love You, You’re Perfect, I Think,” and we have your All Rise recap below. On tonight’s All Rise season 1 episode 17 “I Love You, You’re Perfect, I Think,” as per the CBS synopsis, “Lola faces an excruciating dilemma when she learns Judge Benner’s whistleblower secret as part of her background research for her Attorney General campaign.

Lola has an obligation to expose the ethical breach but knows that doing so could end her mentor’s career. Also, Emily is avoiding the implications of Luke’s “I love you” as she represents a client with mental health issues.”

Emily and Sara were friends as well as roommates. They talked and they talked about their love lives. Sara was seeing Ben Benner. She works with his mother and she thought it might be awkward if the two of them become serious. Then again their relationship was still fairly new. They’ve been on two dates that have gone really well and so Emily told Sara not to stress. Emily also had her own problems to deal with. She was dating Luke and he told her he loved her. Emily wasn’t sure if she was at that point in the relationship. She thought she needed more time and so she was ignoring her boyfriend.

She was basically leaving him in limbo. He had no idea what she was thinking and he didn’t know he was being ghosted. Emily chose to sideline him. She said she needed to focus on work and the truth she was using it to hide. She didn’t want to deal with Luke’s love. She wasn’t sure if she returned those feelings and so she bought herself time with work. Emily was representing a new client. She had taken on the workload of a man that chose to retire out of the blue and so Emily found herself in Mental Health Court. She was representing Rae Lynn Wiggins. She was a young woman who had completed her mental health program and she did really well.

Rae received a great report from the program. The judge in her case had been so proud of her that she got up and she hugged Rae. This had been shocking to Emily. She had never seen anything like it and so she was getting a lesson in what happened in Mental Health Court. Emily also received another case from the departing Barry. She was representing Thomas Farrell as well. He got into a fight and it wasn’t his first. He had been caught in several bar fights. He has a problem with his temper and Emily suspected it was PTSD. Her client was a former soldier in the military. He had been diagnosed with PTSD once before and Emily wanted to use that to get him off the assault charge.

Emily went up against the ADA as well as Luke. He had been the second chair assigned to this case and so this was the first time they were on opposing sides of the same issue. Luke had tried to talk to her earlier. He had wanted to take those three little words back because he could see she was uncomfortable with them and unfortunately Emily didn’t really give him an answer. She was still ignoring him. She didn’t want to talk to him and so Luke stopped trying to reach out. He instead worked on his case with the ADA he was working with and they tried to prove that Tommy was violent.

Only Emily had a great start to her defense. She let her client talk to Judge Lola and he told her about some of the things he had to witness when he was with the military. It was clear he was traumatized by what he saw. He needed help and so Emily tried to get that for him. She was hoping the judge could see that the best thing for Tommy was therapy. Lola was the only one that could move his case to Mental Health Court and so this case needed Lola’s full attention. Which she regrettably couldn’t give. Lola carried out opposition research for her friend Judge Benner and what she found wasn’t good.

She found out Benner had suppressed information. She also learned that Benner committed an ethical violation when she later had a guilty conscience and released the private information of her client. This alone could rule out Benner’s bid for the State Attorney General. She would never receive another promotion and she might in fact be disbarred if this information ever got out. Benner was Lola’s mentor. She respected her and so she had no idea what to do with this information. Lola believes she should report her. She first talked to Benner about it and Benner hadn’t reacted well.

Benner felt she should get a pass. She wanted Lola to keep her secret and Lola couldn’t do that. She knew the information could get out. She also knew she could be disbarred as well for keeping Benner’s secret. Lola was put in a horrible position. She tried to tell Benner and Benner just refused to get it. She lashed out at Lola. She accused Lola of being the problem when she wasn’t. Lola and Benner disagreed about what to do and it led to Lola questioning her steps in everything else. She wasn’t sure if she should give Tommy the help he needed. She had decided to try his case in regular court rather than Mental Health Court and she had listened to several people claim Tommy had PTSD.

There’s no question about it. Tommy was violent and he wasn’t well. His defense had put forward treatment for him. It led the ADA to question if he would follow the said treatment plan. There was always a chance he would re-offend and so it was important to asses Tommy’s well-being. Tommy’s situation had helped his lawyer understand her own problems. Emily realized she was suffering her own version of PTSD. Her ex-husband was a violent man and he weaponized the word “love” to explain his abusive behavior. Emily had grown to be afraid of the word “love”. Its why she was triggered by Luke telling her he loved her and so she finally talked it out with him.

Emily invited Luke over. She told him how she was feeling and he came to understand her position as well as Tommy’s. Luke later talked to the ADA. He recommended compassion and she ignored him. At first. She eventually came to see that he was helping her and that she get herself back into Lola’s good book. She lowered the charge against Tommy to a misdemeanor. He would go to jail for a year and receive treatment. His lawyer accepted it. Tommy now was going to get the help he needed and he wouldn’t be in the position to hurt anyone else. Lola had been proud of Emily and the ADA.

They came up with a common-sense solution. Lola, in turn, told Benner that her ethical violation would remain a problem and so Benner dropped out of the State Attorney General race. She didn’t want to put herself or her friend in a position where they could lose everything. Lola had felt better about it afterwards. She had tried to talk to her best friend Mark about and he wasn’t in the building. He did something he wasn’t supposed. He found out he put an innocent man in jail and he tried to fix it, but he went against procedure and he went behind the District Attorney’s back. He’s now in trouble and he’s been asked to stay out of the office for a while.