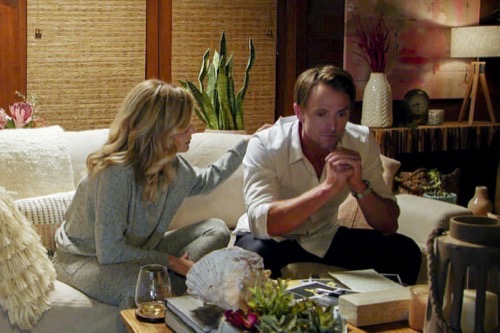 While Lola’s husband is in D.C., she ponders single motherhood and carries on a one-sided conversation with the new baby growing in her stomach.”

Mark and Amy attend a special party where he is congratulated for Special Trials. Meanwhile, Lola is trying to put together a crib on her own.

Luke virtually meets with his grandmother and brother. She asks about Emily with Sam there. Emily is rock climbing with the man she helped at the protests. She vents about work.

Mark arrives back at home to find a folder with photos left for him. The photos show a suspect who was charged for attacking a cop. It is an old case Mark knows he was meticulously about but now he wonders.

Back at the courthouse, the ladies talk Lola into accepting some help with her job. Sherry talks her into letting Ness help. She agrees. Meanwhile, Luke and Emily end up on opposing sides. Emily asks for more time to work with her client.

Lola and Mark meet up. Mark runs an old case by her, the photos he received and the news that a sheriff may have lied to him. Later, Mark tracks down an old associate to see if he can learn more about his first conviction.

Emily gets some help on her latest case by offering her colleague a Swiss roll. After in court, Emily’s client is taken away in cuffs as she begs the court to treat her like a white man.

Luke does some social media investment and learns much more about the woman he is prosecuting. He starts to feel guilty after seeing what kind of life she has that he had no idea about.

Mark tells Amy all about what he has learned about when it comes to his first conviction. She tells him to keep investigating but not to tell anyone. Meanwhile, Emily makes plans to get close to her new love interest from the protests in this new COVID world. Luke calls. He tells her what he has learned about the woman she is defending. Luke calls Lola next so he can vent. Lola starts to have contractions. Luke and the others rush to her aid. She reluctant admits she was scared.

Back in court, Lola is leaneant, giving one of Luke’s client probation when she should have received more. In Luke’s case against Emily’s client, he is tough, after feeling bad when she points out that he ruined a young woman’s future.

Emily receives 10 more cases and freaks out. She cannot take it. But she isn’t going to give up. She stands on her desk, giving a speech after ripping off her mask. Carol comes in and offers help. Emily doesn’t know what that is. She starts to cry. Carol begs her not to quit. She leaves works and finds Luke outside throwing up. He is upset about the case and this whole year. Emily tells him they are needed and they cannot give up. He wants to be the solution. Her new guy picks her up. Luke smiles.

Mark goes over the photos with an associate who tells him to tread lightly. Amy comes in. Mark tells her he cannot ignore this. He has to fix this. She thinks this is all dangerous. She is annoyed he asked Lola for her opinion. Amy takes off. Meanwhile, Lola talks to her stomach before she plays some music to the baby.