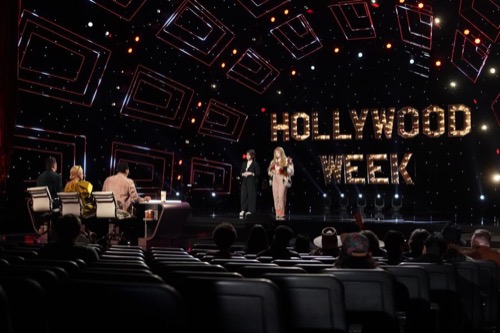 It’s another exciting night of American Idol on ABC tonight with an all-new Sunday, March 22, 2020, season 18 episode 7 called “Hollywood Weeks – Duets” and we have your weekly American Idol recap below. On tonight’s American Idol season 18 episode 7 as per the ABC synopsis, “While contestants anticipate the infamous group rounds, they are in for a shock when the judges announce they have to pick just one partner to duet with on The Orpheum Theatre stage.

One pair’s tensions run high as they can’t agree on a song, while sparks fly with another pair. Two pop divas come together for a powerful rendition of a Celine Dion song; and later, one pop vocalist and one country singer team up to wow the judges with their unexpected harmony.”

Hollywood Week continues with a twist. The contestants were awaiting the dreaded Group Round when they were informed that instead of a group they’ll be performing in duets. The contestants quickly had to go and find partners. It was sometimes easy for people like Louie and Francisco who gravitated towards each other back during the Genre Round. They found working together to be pretty easy and their only setback had been Francisco’s nerves. He was legendary for being a nervous ball of nerves. He was also talented and so far his nerves haven’t gotten in the way of that, but tonight he kept forgetting the lyrics because he was nervous.

Louie did his best to be there for Francisco. He kept prepping him during practice and he later stepped in during the performance after Francisco had messed up onstage. He had forgotten the words and his mistake was glossed over. Louie stepped in to cover for him. He made sure their performance ended on a great note and that’s what the judges remembered. The judges pushed both young men through. They really were talented and so Francisco simply had to work on his nerves. He couldn’t let them get the best of him again. The next few pairings didn’t work out half as well as the boys did.

The judges weren’t afraid to take one person and sent the other home. They did that frequently. They took the contestant that connected with the song as well as the audience and the less perfect one they sent home. The judges were doing quality control. They were only letting through people that were consistently good and so they judged each pairing on its own. Michael and Demi were other ones with a great connection. It played out well onstage and so watching that pairing was Madison and Peyton. The two decided to pair up. They thought they could work together and unfortunately, Peyton had no respect for her time.

Peyton disappeared on Madison. He went out to get food. He grabbed some chicken wings and he went back to his hotel room. Madison had to go hunt him down. She had turned to Bobby Bones for help and he helped her location, Peyton. They informed Peyton that Madison had already picked a song for them. She picked it in his absence because she didn’t know where he was and he resented it. He showed that in little ways. He and Madison practiced the song on the piano and then at the last minute, he decided to rely on the guitar. It threw the song. He wasn’t even that good at it and he also forgot the lyrics but kept singing.

Peyton ruined the start of the song. It threw Madison off and so they were both horrible at the start of it. They didn’t get good until later. Peyton also apologized to Madison afterward. He realized he threw her and so he made sure to apologize to her as well as to his family. He was very humble onstage. The judges saw that and it got them to reconsider. They decided to let both through because they liked how Peyton took ownership over what he did. It wasn’t a unanimous decision amongst the judges. It was a two against one and so the two got through because of one vote. Dewayne and Jordan’s duet went next.

Their families were super excited. They were jumping up and down at the balcony and were just so happy for the performance. Which turned out to be good by the way. Dewayne and Jordan knew how to work together and not everyone could say that. Zack and Courtney were an unusual pairing. She was R&B and he was Rock. They decided to join forces and it was a dumpster fire from the beginning. They kept changing their song. They changed it several times and their last chance came at two am on the day of their performance. Courtney chose the song that would work best for her. It just didn’t work out for Zack. He didn’t know the lyrics or how to play it on his guitar.

They chose the song “Dangerous Woman” by Ariana Grande. This was so far from Zack’s field that he didn’t know anything about this song and it didn’t have any rock elements at all. He was screwed over with this song. His partner chose it because she knew would sound well and that wasn’t fair to him. Zack didn’t sing the song. He tried and he failed. He then tried playing it on his guitar and that was another fail. Zack bombed this song. His partner was a little better. She at least knew what she was singing and so it sucks it wasn’t enough to save her. They were both eliminated. They knew better now and there’s always next year.

YZthasinger and Aliana were another pairings. They had great chemistry on and off stage. They were constantly asked if they were dating now and they aren’t. She has a boyfriend at home. She was committed to that relationship and so she warned people that kept asking that they were going to get her into trouble. The two’s chemistry led to a great performance and both of them made it through. Another pairing that had great chemistry was Faith and Jovin. They became friends off stage and they were able to deliver a stellar performance because of it. These collaborations needed both parties to be on the same page.

Travis and Genevieve went next. They performed beautifully together and they each gave the other a moment to shine. Both of them made it through while Jeb and Alyssa were separated. He stayed and she went home. Kat and Alex were another pairings separated and they were different because they were actually a couple. They had auditioned together. They were used to performing with each other and so tonight just wasn’t their night. She had sounded better than him and the judges voted to keep her in the competition. It was an easy decision. They also sent him home and so the couple had to say goodbye tonight.

Johnny and Margie were another couples that made it to American Idol together. They practiced like crazy and they had sounded amazing in rehearsals. Only they also let a case of nerves get to them. Johnny was losing energy and it was so visible that Bobby Bones had to step in. He counseled the pair. He talked them through their anxiety and they had seemed ready. They later gave a good performance, but it could have been better. The judges told them they were stronger performers than that and they barely let them both through. Johnny and Margie each promised to make it up the next round.

Makayla and Cyniah went next. They were both powerhouses and they thought it would be great if they joined forces. There was just one problem with pairing. Makayla wasn’t as good with lyrics as Cyniah was. Cyniah tried to find a new partner when she learned about Makayla’s problem and thankfully she later dropped the idea. She chose to stay with Makayla. Makayla also received additional training thanks to Cyniah’s mother and so that helped them bring their act together. They later gave one of the most memorable performances from tonight and it received a standing ovation from the judges.

Of course, they both made it through. They were several pairings that made it through to the next round and then there was Tito and Robert. They were roommates and so they just naturally fell into a partnership. They also were really good friends. They considered each other long-lost twins and their sounds were about the same. They were even thinking the same thing most of the time. They later chose to sing a love song to each other and it was amazing in that they each did vocal acrobatics. But the judges liked one more than the other. They voted to keep Robert and to eliminate Tito. The two guys were sad to be separated because they truly did care for each other and yet Tito still wished Robert well because he wanted his friend to win this season.

Just Sam and Sheniel weren’t as close as the boys. They both just tried to do their best and it was another case of nerves that got in the way. Just Sam was panicked into almost dropping out. She wanted to be perfect and she didn’t know if she sounded like that with Sheniel and so she almost pulled out. Sheniel went looking for another partner because she wasn’t sure if she could rely on Just Sam. And then when she couldn’t find anyone else, Sheniel went to Just Sam and she talked her out of pulling out. They picked a song. They chose an arrangement and then practiced like crazy until their final performance together.

And it had been great.

They both made it to the next round.