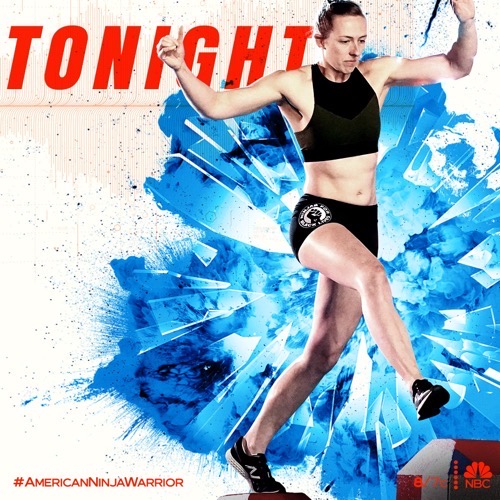 Tonight on NBC their obstacle course competition American Ninja Warrior returns with an all-new Monday, October 12, 2020, episode and we have your American Ninja Warrior recap below! On tonight’s American Ninja Warrior season 12 episode 5 as per the NBC synopsis, “Qualifying is over and it’s time to step it up for the competition’s Semi-Finals. Competitors will face up to ten daunting obstacles including the head-spinning Corkscrew and mechanical Clockwork, which are new to the course this season, in addition to fan favorites such as the Salmon Ladder and the iconic Warped Wall.”

American Ninja Warrior has had to change their platform. The current pandemic forced these changes, but the show has decided to look on the bright side and one of the things they can take pleasure in was that this year they’ve had some of its most emotional runs in history. Stories all around the states about obstacles people have faced during the lockdown. Some of them had lost their jobs and some managed to carve a new path for themselves in this suddenly changed word. The ninjas have all gone through something that led them to here. They’ve trained under unusual circumstances and now they were ready for the course.

The course tonight had several new obstacles. There was Clockwork, Burn Rubber, Corkscrew, and The Dungeon. The first person to try out the course tonight was Kid Owhadi. The Kid has made a name for himself and he’s only been doing this for two years. He’s trained under some of the best ninjas in the world. He thought was ready for anything tonight as he came at the course with gusto and he was able to speed through the first half. It was the second half that proved to be the problem. Kid wasn’t able to hold on during the Corkscrew and he fell into the water. This was the first significant fall for him this season. And he’s probably hoping it will be the last.

Next up, there was Nate Hansen. He was known as Gnarly Nate and he too was an inspiring up and comer. It was assumed that Nate would make it to at least the second half of the course, but he instead he fell during the first half on Burn Rubber. The wheel began spinning under him and he wasn’t able to course-correct in time. Night 1 of the Semifinals continued with Sandy Zimmerman. She was known as the first mom of the Warped Wall and she wanted to continue to inspire other women and girls tonight. She was already an inspiration to a little girl named Oaklee from her hometown.

Oaklee was a very sick child. As a surprise for her, Sandy helped create a ninja obstacle course for Oaklee in her backyard and the little girl loved it. She wanted to be a ninja one day. She wanted to be like Sandy and Sandy was a wonder to watch. Sandy had no problem whatsoever with the first half of the course. She even made it up the Warped Wall on her first try. Sandy was doing so well until she made it to Corkscrew and the newest obstacle once again proved to be too much. There hasn’t been a single person to make it past this obstacle and so was this one too tough? Does it take a more experienced ninja to make it past this obstacle?

Up next was Zhanique Lovett. She too wiped out on Burn Rubber and didn’t make it to the back half. There was also Glenn Albright and Barry Goers who again wiped out. One on Burn Rubber and the other on Corkscew. Then there was Donovan Metoyer. He was known as the Classy Ninja because he showed up in a three piece suit and he wore that suit when he made his run tonight. Donovan also threw in some other stylish bits. He did spiral twist up the Warped Wall and he sustained his weight on the Corkscrew by cradling into it. Donovan tired himself out by the ninth obstacle. He tried to make it up the Dungeon and he fell. He had the best run of the night so far.

It was Donovan’s run the others had to beat. Caitlyn Bergstrom couldn’t do it and neither could Ryan Lashoff. Tyler Gillett also had his run. He made his run tonight wearing a t-shirt with his cousin’s name on it because he dedicated his run to his cousin Bill. Bill was sadly dying. The doctors didn’t believe there was and the family is already told they needed to say their goodbyes to him. This was especially hard on Tyler. He was close to Bill and so he was glad when his cousin was well enough to watch his run tonight. Tyler had a lot on his shoulders as he took on the course. He didn’t want to let anyone down and so his run was truly inspirational.

Tyler was a four-time veteran. He had no problems with the first half of the course and he too made it pass Corkscrew during the second half. He also became the first ninja to make it pass the Dungeon. Lastly, Tyler became the first finisher of the night as he was the first to make it up the Spider Climb. Grant McCartney went next. He was a veteran Ninja as well and he almost had a mishap with Off the Hook. He expended energy just to get off of it and he also stumbled on Burn Rubber. Only Grant was in no rush. He was taking time as he made it through the course and he continued to stumble.

Grant almost several times during his run. He also came across the Salmon Ladder and that’s an obstacle he’s been notoriously falling on for the past few seasons. It was truly a miracle when Grant made it past that obstacle tonight. He made it to the Corkscrew and he was doing his best to hold on when he sadly fell on the third piece of the obstacle. Grant will have to hope that he made it far enough fast enough to make it to the Finals. And as for the Corkscrew, it kept on making enemies of the veterans as he knocked several prominent ninjas into the water and so this obstacle was proving to be quite difficult.

Cam Baumgartner had his run after the break. He was called explosive during the Qualifiers and he showed impressive sportsmanship again tonight. He sped through the course. He barely moved Burn Rubber with how fast he was moving and so he was setting the record with the speed. Cam didn’t find any of the obstacles too hard for him. He went through Corkscrew like it was nothing and he was a full minute ahead of Tyler as he began making his climb up the last obstacle. Cam eventually came to have the fastest time in all by the time he was finished. Next up was Jamie Rahn. His hands were still a little shaky.

Jamie messed up one of his fingers during an at-home building project. He sawed off his thumb and so he wasn’t entirely healed when he made his run tonight and it showed. He usually has a flawless way about him. He stumbled during the first half and he eventually overcomes it. His movements became smoother. He got faster and he was doing so well until the Dungeon. His bad thumb meant couldn’t quite grip the obstacle as much as he should and he ended up falling into the water. He’ll have to wait to see if he made it far enough fast enough. And by this point, there were only two finishers out of the group.

Daniel Gil had his run. He was last season’s runner up and so he was back for that million-dollar opportunity. Daniel raced through the course with the fastest time to date. He sped his way through it and he was the third finisher as well as the fastest time on the clock. It was actually going to be pretty hard for anyone to try and top his time, but the others all gave it their shot. Alyssa Beird had her run. She went next and her fall came quickly. She was one of the top women in the competition and she fell on Clockwork. Next up was Jake Murray is otherwise known as the Wild Man out of Colorado.

Jake has pulled off some daring moves on and off the course. Just the other day, he and his friends went into a cave without a map and they came across throbbing spiders. Its truly a miracle they managed to survive much less get out. Jake also did these crazy things on the course. He came out in a straight jacket once and another time there was a psychic there. Only he hadn’t brought his usual gimmicks tonight. He seemed more serious and it turns out he was faster when he didn’t do all of that. He raced through the course. He came to the Spider Climb with the fastest time. And while it did test his endurance, Jake was able to finish just a second earlier than Daniel Gil.

Flip Rodriguez also had his run. He ran during the commercial break. The ten-time veteran survived the Corkscrew and he fell on the Dungeon. Another one to fall was Chris DiGangi. His fiancee Jesse LaBreack otherwise known as Flex LaBreack fared better on the course. She was the first woman to make it past the Corkscrew and she was fighting to hold on during the Dungeon when she took her fall. She fell in the same place as Chris and so it was maybe it was their training. Then there was also Adam Rayl who wasn’t showcased tonight. He was another one who had his run over the commercial break and what a waste it was because Rayl did hold on during the Dungeon and he became one of the few finishers tonight.

Jody Avila was the last to have his run. He dedicated his run to his wife who works as a nurse and whose been on the frontline of this pandemic. It also became clear early on that Jody was aiming for the fastest time. He had to beat Murray’s record and he seemed to be doing so as he made it past the Corkscrew. If there was one thing working against him, it was weight. He was a big guy and so it was hard to hold onto something with just one hand. Which is what happened on the Dungeon. Jody couldn’t get both of his hands on the obstacle and he fell into the water. He still made it far enough fast enough to make it to the next round.