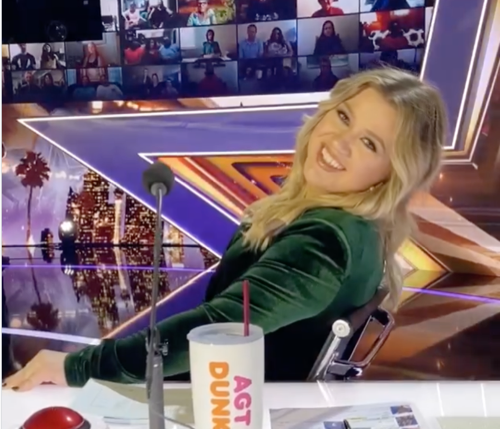 Tonight on NBC America’s Got Talent begins with an all-new Wednesday, August 12, 2020, episode and we have your America’s Got Talent recap below! On tonight’s AGT season 15 episode 12 “Results Show 1″, as per the NBC synopsis, “Five acts from the previous night’s show will move on to the semi-finals round of the competition. Viewers will have one last chance to send their favorite performer of the night into the next round.”

Live from Universal Studios, Hollywood! It’s Part One of the Results Show! The live shows were very different this year because of the Covid-19 scare. Their audience and how they were viewing the acts had to be changed. The audience was now all watching from the comfort of their homes. There was even this big screen behind the judges that was showing people’s video cams and so that’s how the “live” audience was staying connected. The show was also down one judge because Simon had been injured. He injured his back falling off of an electrical bike and he had required surgery.

Simon was still out of commission for the first Result Show. Thankfully, Kelly Clarkson was there to fill in for him and she was having fun with the three remaining judges. They all enjoyed themselves as eleven acts performed yesterday. The acts each brought something new and exciting to the table and unfortunately, only five of these same acts can go through to the next round. The judges and America had to decide amongst the group. Then America itself can vote in the Dunkin Save. Everyone was therefore given the chance to decide who would make it to the Semi-Finals and before they could decide, they were told which acts were in danger.

The first three acts in danger are Brett Loudermilk, Double Dragon, and Feng E. America has the chance to vote for either of them until the end of the episode and so moving on to people who get to stay. The first act going through to the next round is Archie Williams. Not only does he share a name with a famous royal baby, but he was also an amazing singer and performer. He was the first to make it through and there were four remaining spots after him. Tonight live show wasn’t just about the results. There were also several performances and the magician Mat Franco came back to perform.

Mat wowed the judges with his impressive magic tricks. He started out by pretending everything was a coincidence and then right in the end he revealed he knew it all. Which eerily felt like real magic rather than magic tricks. He was just that good and there were more performances. They all stood out in their own way. They got the judges and the audience excited. Then came time to reveal the second act going into the Semi-Finals. It was between FrenchieBabyy and Shaquira McGrath. It was a tough choice and yet the audience chose Shaquira. Shaquira is also a singer and performer and so far its been a great night for them.

The third round tonight was between Roberta Battaglia, Pork Chop Revue, and Simon and Maria. Again, they were talented. They all had a great night yesterday and so the audience was given a tough choice. They could pass one act to the Semi-Finals and they chose Roberta. The little girl burst into tears when she found she was going to the next round. She too was a singer and performer and so there seemed to be a theme tonight. The audience was heavily favoring singers. Singers have always traditionally done well on AGT and they seem to be doing extremely well on this current season.

One of the performances tonight was one of AGT’s singers. Kodi Lee returned to perform an original song and he was proof of how well singers have done on past seasons of the show. He actually won his season. His artistic expression as well as his story helped the audience connect with Kodi like they never have with anyone else. After Kodi gave another stunning performance, it was time to announce the winner of the Dunkin Save. The DS could only save one act tonight and it saved Brett Loudermilk. The Sword Swallower had frightened the living daylights out of the judges and so it makes perfect sense that America would vote to keep him.

There was only one spot left after Brett found out he made it to the next round. It came down to either Double Dragon or Feng E and this time it was the judges’ decision. The judges have had to watch great acts go home tonight because of how America voted. America saved three singers and one sword swallower. There needed to be more to shake up this season and so the judges carefully considered their choices. They loved Feng E. The Ukulelist pulled out amazing performances with their little guitar and it wouldn’t hurt to have someone like that in the Semi-Finals. But with everyone else leaning towards singers, maybe the judges would have liked to complete the set.

This in turn means Brett is the only non-singer from tonight that’s making it to the Semi-Finals.