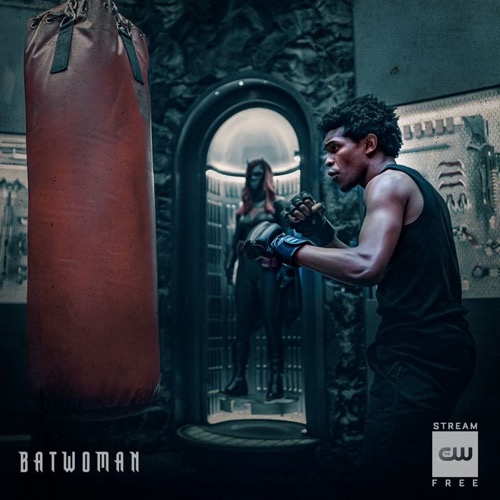 Tonight on the CW the series Batman airs with an all-new Sunday, April 26, 2020, season 1 episode 17 and we have your Batwoman recap below. On tonight’s  Batwoman season 1 episode 17 called,“A Narrow Escape” as per the CW synopsis, “Batwoman encounters a new challenge when an old villain resurfaces, testing the heroics of Gotham’s most stand-up citizens. Alice’s limits are tested.”

Alice and Kate are playing video games together when the lights start to flicker in Kate’s apartment. Alice asks her if this is really happening, the two of them bickering, drinking, and playing video games. Alice thanks Kate for never giving up on her, Kate says she is worth it. Kate gets upset with the lights flickering and screams stop, let me stay here. Then we see Alice tied to a chair and someone is torturing her.

Batwoman is on a case and takes out a perpetrator. She fights him, knocks him down a flight of stairs and he dies. Luke is trying to talk to her, he tells her that her heart rate is off the charts.

One week later, officer Wilkos is in his car and finds a bomb strapped to his chest. A person comes on the radio that tells him to push the yellow button, it will save him but cause countless other people to die. Or, he dies and he saves all those other people who will never know of his sacrifice.

The Detonator is back in Gotham after a seven-year hiatus and he is out to prove there are no heroes in Gotham.

Kate thinks she crossed the line when she killed Cartright and is afraid that she might kill someone else. Julia in the meantime is dressing up as Batwoman, but it isn’t easy and she hurt her ribs. She tells Kate that she needs to get back to work.

Mouse is in a psychiatric facility, he is telling a group that his father urged him to hide his face and live in the shadows to avoid ridicule, but hiding was for his father’s comfort. And when he realized that, he became free. Alice is beside him and asks him what he is doing, she is annoyed. The doctor asks Alice if she would like to share, she says she will pass. Mr. Elliott drops in and he interrupts, the doctor says they need to move on. Elliott says he taught Bruce Wayne everything he knows and starts to freak out, they remove him.

Sophie is with Julia, they are looking at a case, Julia tells her that Gotham bank was blown up the night before.

Luke is working out in the bat cave, Kate asks him if he wants to talk about it. He tells her that while she was away the bat light went unanswered.

Jacob updates his team on the Detonator, he is a terrorist who targets good guys to make a decision that kills dozens of people. He targets heroes and wants to prove that they are not as heroic as people think they are. Jacob is wondering why he is back. Meanwhile, Kate and Luke are looking at the same information. Kate asks him who George Adler, Luke says he is black ops and he was fired, he was caught taking selfies with enemy corpses. Kate says she will go to talk to Adler. She tells him that she is not suiting up, she is just going to speak to him. Luke tells her that he wants to know what is going on. She says if she told him the truth, he wouldn’t want her to suit up either.

Alice is walking through the hallway, Elliott passes her and she taunts him about Bruce Wayne which causes him to stab her. Alice screams that she needs a doctor.

Kate goes to see George Adler, she tells him she is from a real estate company. She hits him and asks him where he planted his next bomb, he says it wasn’t him, it was his old man, Adler Sr.

The first time he killed a man it put him in a dark place, he snapped. He is in Gotham Cemetery, he died seven years ago.

We see a defense attorney, he wakes up in his car and he has a bomb attached to him, he gets the same option as the police officer.

Alice sees Mouse, she asks him if he is looking for her. He asks if she is ok, she says yes. He tells her that Elliott is in solitaire. She shows him that she got a knife from the infirmary.

Jacob is on the phone with Bobby, who has the bomb attached to him, he tells him to stay calm. Kate calls Luke and tells him the Detonator is a copy cat, the original has died.

Mary’s clinic is the place that is going to blow up if Bobby takes that option. Jacob arrives to see Bobby, he assures him that he is going to get the bomb off him and he can do the right thing. Mary doesn’t want to leave, Julia is there to help her and if they can’t get everyone out they at least try to cover them with mattresses. Bobby presses the button saving his life, a large building blows up and along with it, Mary’s clinic. Mary is ok, and Julia as well. Kate is there, Mary tells her that she knows she is batwoman and can’t believe she didn’t figure it out sooner. She goes on to say that she has looked up to her her own life and now Gotham needs her. Kate says she is no hero, Mary says she knows she is not a hero, she just wants her to keep going.

Mouse is with Dr. Butler, he stabs him and a colleague.

Jacob is the next target of the Detonator.

Kate goes back to the Batcave and considers what Mary told her. Meanwhile, Jacob wakes up and he has a bomb attached to his chest. Luke calls Kate, she is back to being batwoman, he tells her that he thinks the detonator is a crow. Kate finds her crow on a motorcycle, she asks him if he calls Lucious Fox, Luke’s father – he says he ties up loose ends. Sophie is with Jacob, the bomb is at Wayne tower.

Batwoman is the parking garage with the bomb and the crow, Luke is there and tells her that she needs him alive. Luke has a gun on him and asks why did he kill his dad. The crow says it was Tommy Elliott, he wanted him dead. He says he shot his father by mistake, he was only supposed to rough him up. Luke hits him over the head and knocks him out with the gun.

Kate is having trouble breathing, she pulls off her mask and wig. She tells Luke that killing the crow won’t bring his father back. She tells him that she called Cartwright and she couldn’t suit up because she feels like a fraud. Then she tells him to not let his anger turn him into something that he is not. The bomb goes off, Luke and Kate manage to run to safety and drag the crow with them.

Jacob welcomes Sophie back, he tells him he is glad to have her on the team.

Luke thanks Katie for talking him out of killing the crow. She asks him about the journal that his father wrote, he says it is all about Wayne technology. He asks her about Cartwright, she says she didn’t want him to know that she broke Batman’s code.
It is time for Alice’s therapy, Mouse is disguised as the doctor who he killed. She says if they stay there, he will be king and she will be queen.