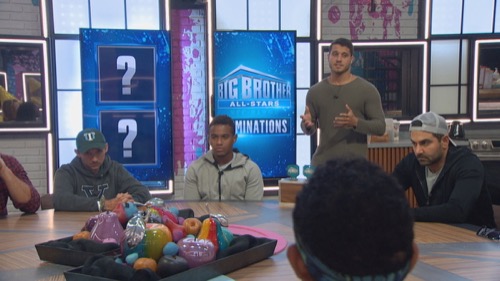 Tonight on CBS Big Brother 22 airs with an all-new Sunday, August 9, 2020, episode and we have your Big Brother 22 recap below! On tonight’s Big Brother season 22 episode 2 “Nominations,” as per the CBS synopsis, “Tonight on Big Brother the new HoH, Cody will nominate the All-Stars who will go on the block.  Also in the first twist of the season, we will see the Safety Suite twist.”

Cody didn’t want to come in and put the target on his back from the start, but there is no way he was going to leave his fate In everyone else’s hands. Da’Vonne is so excited to be in the house, it is a little intimidating, but she is confident that she is going to shine. Ian really wanted to win the first HoH because he is one of two people that won this game before. Janelle is the first four-time player on the show.

She and Kaysar were aligned in both seasons where they played together in the past. Enzo is excited, it took him ten years to get back and he is so ready to play the show. Nicole is in tears, she thinks about Da’Vonne and how she was the final vote for her to win her season of BB. But Da’Vonne remembers how Nicole got rid of her. The Have-Not room is finally open and it is just as bad as Kevin thought it would be.

The game has evolved a lot since Kaysar was on the show. Nicole goes to speak to Cody and asks him if they can be each other’s ride or die, he says ok. David tells Kaysar that he came on the show because he wanted to be the first black winner.

Tyler is happy that Cody is HoH, he goes to see him and Cody pretty much tells him that he has his back. Cody likes Tyler, but he wants him to open up to him.

Cody tells everyone to meet him in the living room, BB has an announcement. It is about the Safety Suite. The houseguests get their VIP passes, for the next three weeks the safety suite will be opened for a specific period of time before the nomination ceremony. Inside the safety, the suite is a special one a time competition where the winner wins safety for the week.

Each VIP pass holder gets access to the suite but thinks carefully because you can only enter once. Whether it is a strategic move or they feel in danger when they enter the room is completely up to them. The current HoH will not be eligible to enter the safety suite during their reign. And, there is more at stake, the houseguest who is victorious will be able to name a plus one. The plus one will be safe but they have to endure punishment for the entire week.

The safety suite is now open if anyone wants to go in, they only have one hour to decide. Enzo goes to see Cody, he tells him that he is not going into the safety suite, he knows they are good to the end. On the other hand, the safety suite is looking kind of good to David right now. Keisha and Janelle talk, they both think each other are on the radar. The house is spinning in paranoia.

Kaysar goes to see Cody, he tells him that he is not in an alliance and is down to be in an alliance with him. Cody is not showing Kaysar all of his cards, he sees how his brain turns fast. Kaysar feels insulted after their conversation. Janelle is next to go see Cody, she asks if she would be a target this week, he tells her no, but she definitely raises a flag in his head. Janelle thinks Cody is being really confusing and thinks he has something in the works that is going to affect her.

Memphis goes in to see Cody, he says if they can get through the next couple of weeks they can work on a bigger alliance. Cody likes Memphis and asks him who he would put up, maybe Janelle and Kaysar. Memphis says the two are old school and tough players, he likes them, but he is not 100% sold on the two of them. Thirty seconds to go and Kaysar goes to the safety suite, so does Janelle.

Kaysar does pretty well with the safety suite challenge, it appears that Janelle had a hard time. Cody calls everyone in the living room, Kaysar finished with 7:55 and Janelle with 16:36. Kaysar is safe for the week. As a winner, he gets to name a plus one. He gives it to Janelle, they are both safe.

Now that Kaysar and Janelle are safe, Cody has to re-think his strategy. Janelle is called to the diary room, she gets to be the BB All-Star mascot, she is literally dressed up like a star for the week. Janelle is thrilled that she got the cutest punishment ever.

Kevin is super nervous about the nominations because he doesn’t know Cody and feels that he is so hard to talk to. Kevin starts crying, Cody gives him a hug. Afterward, Cody feels horrible for even thinking about putting Kevin on the block and knows he needs to separate his emotions from the game.

Time for the nominations. The first houseguest nominated is Keisha and the second is Kevin, Cody tells them not to take it personally.