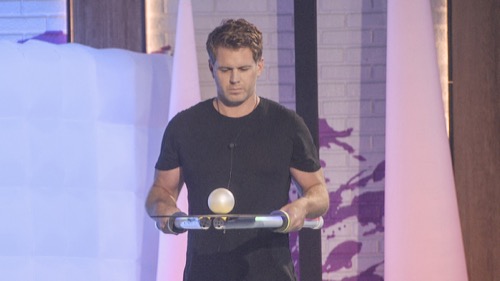 Tonight on CBS Big Brother 22 airs with an all-new Thursday, August 20, 2020, episode and we have your Big Brother 22 recap below! On tonight’s Big Brother season 22 episode 7 “Live Eviction and HoH,” as per the CBS synopsis, “Tonight on Big Brother it is eviction night and either Nicole A or David will be sent home.  Following the live eviction, the Head of Household competition will be held.”

David and Nicole A. remain on the block positioned against each other. Both of them, don’t know about the alliances in the house. Nicole A. doesn’t want to go home and planned on fighting her way to stay.

Nicole A. is upset that Memphis didn’t take the opportunity to get rid of a big target, obviously, he is only thinking about himself.

Nicole A. tries to get Da’Vonne to vote for her to stay, but she won’t do it. She wants to see the first African American to win Big Brother this season and won’t vote out David because of that.

Kaysar knows that he is not a part of the alliance that is running the house. He wants to save Nicole A., so he goes around to campaign for her. Da’Vonne doesn’t like it, Kaysar is not offering her anything for saving Nicole A.

Da’Vonne goes to David and asks him if he is in an alliance with other houseguests, he says no, he has safeguards, but not alliances. She finds it stressful to speak to him because he won’t be clear. He tells her not to campaign too hard for him, he doesn’t want people to think she is in an alliance with him. She tells him to do his thing then and walks away frustrated. David then speaks to Bayleigh, tells her that he knows Da’Vonne is only looking out for him, but she needs to calm down. Da’Vonne is having a tough time with this, her morals are telling her to keep David, but he does nothing for her game.

Nicole A. is frustrated, Janelle and Kaysar say they have to pull with Memphis and she is still on the block. The house wants Janelle gone, and she doesn’t think it is good for her to be associated with her, she is destroying her game. Nicole A. tells Cody that if she stays in the house, she is going to put Janelle’s head on a stick, metaphorically.

Julie tells Nicole A. about the six alliance, and that Janelle and Kaysar did have her back at the beginning of the week.

Time for the HoH competition, this one is called Mug Shots. They will play one at a time, they have to slide mugs down three slides. The goal is to land there mug on the highest score, 5. Once they are done they have to hit a buzzer and they only have 30 seconds to play.