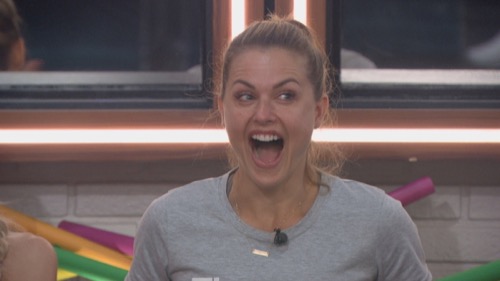 Now that all the targets are gone in the house, everyone is panicking and hoping that they are not going to go on the block. Nicole is stressed by Kaysar’s speech when he left. Cody tells Dani that he is upset, she says Kaysar is disrespectful for saying there was a love triangle. In fact, she is seriously offended by that comment. Da’Vonne is supposed to be in the Slick Six alliance, but she feels like during the HoH competition they were all slinging at each other.

Cody goes to speak to Da’Vonne to do damage control, she is on his radar, but not right now. After he leaves, Da’Vonne says he is a liar and it’s war, she is ready to play. Meanwhile, Christmas and Dani are happy that Christmas won HoH. So far, Christmas’ targets are Da’Vonne and Bayleigh because she knows they have each other’s back. Dani wants to see Da’Vonne and Bayleigh gone as well. Da’Vonne goes to see Christmas to talk game, she tells her that she is not coming after her and respects her game. Enzo goes to see Christmas, he throws Ian, Da’Vonne, Bayleigh, and Nicole under the bus.

Christmas calls everyone to the living and reads them a note. Julie told them on night one that they would discover new rooms in the house that they have never seen before, and the Safety Suite was just the beginning. The Safety Suite is closed, but in the basement, there are three powers and it is the most frightening place in the house. For the first time in BB history three new powers that will be awarded in one competition.

And, they will be competing in total darkness. Christmas is worried because these three new powers could blow up her HoH. Da’Vonne doesn’t like this, she doesn’t like the pitch dark. The houseguests are all in the basement looking for the powers. They have to find power icons that fit into power podiums.

Tyler finds a secret room, while David finds the “disrupter” power. Dani finds the “replay” power and Christmas finds the “blocker” power. The competition is over, now that the three powers have been found. Christmas tells Tyler that she has a power, they have a final two agreement, so she trusts telling him. She has won the blocker power, which means she can stop herself or another houseguest being named a replacement nominee. She must declare her wish to use the blocker before the nominee is named, in the next three HoHs. Dani has the replay power, this power allows an HoH to play in back to back HoH competitions. David won the disruptor power, he can save one of the nominees and force the HoH to name a replacement – the person he saves will be saved the entire week, and he can save himself. All the powers are good for the next three HoHs.

Dani goes to see Bayleigh and talks to her about the game. Bayleigh tells her that she was told a few weeks ago that Dani was coming after she and Da’Vonne, Dani denies everything. Bayleigh asks where they go from here, Dani says she doesn’t know. Enzo walks in the room and Bayleigh asks him if there was talk that Dani was coming after them, he says yes. Bayleigh says she will talk to the people who told her, and she will come back to her. Afterward, Dani gives Enzo heck, he says he was cornered and he doesn’t want to be involved.

Dani goes to see Christmas and tells her what happened. Christmas tells Dani not to let Bayleigh poke her. Meanwhile, Christmas doesn’t want people to think she is aligned with Dani, because she doesn’t want to be in the middle of is. Now, if Christmas puts up Bayleigh, they are going to think she is aligned with Dani. Bayleigh tells Tyler, and now since he is the one to have given the info originally to Bayleigh, it is blowing up in his face. Tyler tries to calm her down, but Bayleigh finds it condescending and manipulative.

Time for the nominations, Bayleigh is the first houseguest to be nominated and Da’Vonne is the second.