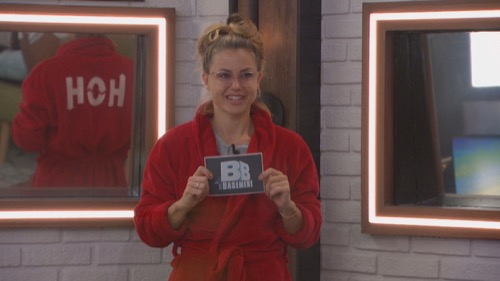 Tonight on CBS Big Brother 22 airs with an all-new Thursday, September 9, 2020, episode and we have your Big Brother 22 recap below! On tonight’s Big Brother season 22 episode 15 “PoV & Ceremony,” as per the CBS synopsis, “Tonight on Big Brother it is the PoV competition. Christmas voted Bayleigh and Da’Vonne for eviction and they will both be fighting to see if they can win and take themselves off the block. ”

Christmas nominated Da’Vonne and Bayleigh because she believes they are a powerful duo. They were coming after some of her alliance, so she had to come after them. Bayleigh is ready to pack things in but Da’Vonne tells her to pick up and move forward. David doesn’t like that the two are nominated, he has the power to take one-off, but he is choosing not to use the power because he may need it for himself. Bayleigh is so confused, she goes to speak to Christmas to find out why she nominated her. Christmas cries in Bayleigh’s arms, she is a mess. Bayleigh tells her not to be upset, it was a good game move. Christmas came to play Big Brother and she knew she had to make some big decisions, this is one of them.

Dani and Nicole go to speak to Da’Vonne, she tells them this conversation cannot get out. Da’Vonne tells Dani that Tyler told Bayleigh that she was coming for them. Dani is upset, she is supposed to be working with Tyler and now he does this, she has to figure out how to turn this around in her favor. Dani says that Tyler has to be backdoored. Nicole doesn’t like the plan, but she just agrees with them because she wants to get closer to Dani. Dani then goes to see Christmas and tells her that she thinks Tyler is trying to pit the girls against each other. Christmas says she doesn’t know how to process this.

Time to pick the Veto players, Christmas chooses Nicole, Da’Vonne chooses Dani and Bayleigh chooses Ian. Ian didn’t want to play Veto, he doesn’t feel up to it, he hasn’t had any solid sleep in two days and he has had sharp pains in his chest. Ian goes to see Christmas, Enzo and Kevin are there, he says he is going to see a medic. Dani would love to throw the Veto and let Da’Vonne win, she tries to convince Nicole to do the same.

Time for the Veto competition, everyone goes to the yard – it looks like a high school track n’ field. Ian will not be competing in this competition, the medic has determined that he is not able to. This competition involves running, they have to put their hands on buzzers and they will see math equations. When they see the one that adds up to thirteen, then can let go of the buzzers and run to the other end. If they run on the wrong math equation, they are disqualified. Da’Vonne makes a false start and she is eliminated.

There goes Dani’s plan. Da’Vonne gets to pick a prize. Bayleigh also false starts, she is eliminated. Bayleigh claims a prize, it is a home gym and the ability to not be a Have-Not for the rest of the season. Bayleigh takes the Veto, gives Da’Vonne her prize. Dani is eliminated, she picks a prize, she gets a slop-i-tard. Dani trades with Da’Vonne. Nicole is eliminated, the prize is $5,000.00. Nicole trades with Da’Vonne, she takes the punishment. Christmas’s prize is the tri-athlete, she must complete 500 laps on a tricycle. Christmas decides to trade it for the Veto.

Tyler is having a tough time in the game, a moral dilemma. He finds that he is the cause for a lot of stress in the house and that is what is causing all his stress. Tyler goes to speak to Bayleigh and Da’Vonne, he tells them he is struggling in this game. He wants to win, but do it the right way; when they were put up, he felt guilty. He is going to ask Christmas to use the Veto on one of them and put him up because they are standing for something greater. He doesn’t want to be idolized for being manipulative.

They tell him that this means a lot to them. Bayleigh hugs Tyler, and so does Da’Vonne. Tyler says he is going to go talk to Christmas. The women cannot believe it, Bayleigh says she is not getting her hopes up. Tyler goes to speak to Christmas, he says he is the reason that Da’Vonne and Bayleigh are on the block. Christmas tells him that she made her decision on her own, he didn’t have any impact on that. He says he has a very guilty conscious of how he played the game, the only solution is for him to leave and for them to stay, but he doesn’t want to destroy her game. Christmas can’t believe this, Tyler is her final two and now he wants her to back door him.

Christmas is having a hard time deciding what to do. She plays backgammon with Tyler and tells him that Da’Vonne told her that Bayleigh wants his head on a silver platter. Tyler is thinking maybe he shouldn’t have thrown his whole game away if that is Bayleigh’s attitude.

Time for the Veto meeting, Christmas has the power to veto one of the nominations; she has decided not to use the Veto. Bayleigh asks if they can share who she said her untouchable was, Christmas says no. Christmas has given up her summer with her son, she is not giving up her game for Tyler. If he wants out, he will have to get out on his own. Bayleigh and Da’Vonne are upset, they feel betrayed by Tyler.