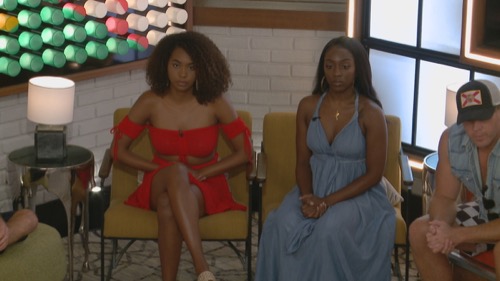 Its day 37 inside the Big Brother house and it’s been the most emotional and unpredictable week yet. Tyler tried to end his game early, but with all the power in Christmas’ hands, she refused to let her closest ally through in the towel. Either Bayleigh or Da’Vonne’s dream of winning half a million dollars comes to an end tonight.

After the Veto meeting, Da’Vonne couldn’t believe that Christmas did not take her off the block and put up Tyler. Tyler knows that he has to refocus and move on with his game. Bayleigh on the other hand is not surprised by what Christmas did and she thinks that Tyler was lying.

Bayleigh and Da’Vonne hug it out, David brings the Kleenex. Da’Vonne tries to comfort Bayleigh, who is more of a mess. Bayleigh just wishes she and Da’Vonne could continue playing together.

Da’Vonne goes to see Christmas who tells her that she cannot put someone else in the crossfire. Bayleigh is definitely Christmas’ target this week, because she is coming after Christmas. Da’Vonne says that she did nothing this time, she didn’t say anything and she shouldn’t be on the block. Christmas tells her that they have her, she is going to be ok. Da’Vonne smiles and grins, she has no choice but to be on Christmas’ side for the time being. They hug it out, Christmas leaves and Da’Vonne says under her breath that she is so stupid. Next, Da’Vonne speaks to Tyler, he says she has his vote. She tells him that she needs him in this game. Tyler hugs her and tells her that he is going to make sure she stays. David wants Bayleigh to stay because she can win competitions.

Cody is called to the Diary Room. It is a letter from his family, his grandfather passed away on Labour Day. Cody breaks down, it’s hard not to be home and with the people, he is close to. Once he is back in his bedroom, Tyler sees that he is upset and hugs him. The rest of the house finds out and everyone gathers around him, his grandfather had cancer. For Cody, this makes winning even more important.

Da’Vonne is sitting with Christmas, she tells her that she pulled the trigger on her, and that is why she is upset. They argue back and forth, Christmas blames Bayleigh and Da’Vonne blames Christmas. Bayleigh comes out of a room and overhears, she walks up and stands in front of them – the two don’t even see her there. Meanwhile, Ian is in the shower and overhears everything. Da’Vonne goes outside and loses, she asks why Christmas is permitted to speak to her that way. Meanwhile, Bayleigh is still with Christmas and they get into an argument.

Bayleigh and Christmas’ yelling match go right into the living room. Christmas goes up to the HoH room and Bayleigh goes outside and she and Da’Vone tell David, Enzo, Tyler, and Cody what happened. It doesn’t take long for Christmas to go back downstairs, she sits in the kitchen and continues boiling over in front of Kevin and Dani. Kevin tells Christmas that he thinks she should go to the HoH room. Da’Vonne walks by and shouts remarks at Christmas who shouts them back. Bayleigh tries to calm the situation down and says it is unnecessary.

Time for the live vote and eviction. Da’Vonne stands up and has her last words, she says she is up there because she is a casualty of something that she didn’t do. Bayleigh has her turn, she says she loves the house guests and tells them to vote what is best for their game.

Bayleigh sits outside the house with Julie, she says she is doing great, she is happy for Da’Vonne and is rooting for her. Julie talks about Christmas, Bayleigh feels that she betrayed her. Julie tells her about the alliance that Christmas is in, the committee. Bayleigh says she doesn’t want anything else to do with the drama, she wants it to stay in the house.

Time for the HoH competition, this one is called Power Trip and it is an endurance competition. On Julie’s go, the houseguests have to hold on for dear life, fall off the billboard and they will be eliminated. The last house guest hanging on will be the new HoH for the week. The first three to fall off will be the Have Nots for the week.