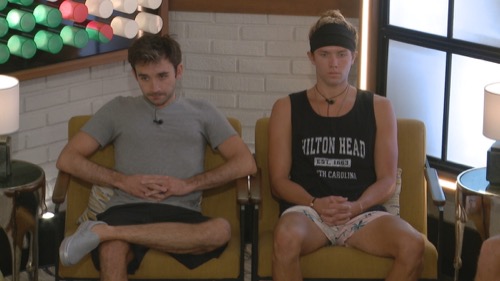 Tonight on CBS Big Brother 22 airs with an all-new Thursday, September 17, 2020, episode and we have your Big Brother 22 recap below! On tonight’s Big Brother season 22 episode 18 “PoV and Ceremony,” as per the CBS synopsis, “Tonight on Big Brother it is the live eviction and either Ian or Tyler will be heading home.  Following the Eviction, the Head of Household competition will be held and there will be a new HoH.”

Dani told everyone that her target is Tyler, but it is actually Ian because she doesn’t want to go against the house this early in the game. Dani also has the reply power, will she use it and play for HoH tonight?

Kevin is so relieved that he is off the block. Tyler on the other hand is hoping he has the vote to stay because of the committee. Nicole is devasted that Ian is on the block and she is forced not to tell him anything because her alliance wants to keep Tyler. Da’Vonne goes to see Dani who is frustrated at how many people she has put on the block. Dani doesn’t like Da’Vonne took Kevin off the block but she is going to work to get their relationship back on track. Ian goes to see Dani and she lies to his face, so he feels as safe as possible.

Shockingly, Ian is in a final four with Dani and she is willing to let him go. Next, Tyler comes in the room to see Dani, she tells him that she feels terrible about everything and she doesn’t plan on letting him go home. Tyler is super happy that he could be staying in the house but he doesn’t trust Dani. Ian goes to speak to Memphis, he has been a lone wolf, and he wants to try to get his vote. Ian is starting to understand that he is not a pawn but the target, and he is starting to get mad. The fact that Tyler is not campaigning is starting to raise red flags for Da’Vonne.

Nicole goes to see Dani who tells her that the committee wants to keep Tyler, she hugs Nicole and says sorry. Nicole tries to plead her case to keep Ian to Cody and Memphis, Memphis laughs and tells her that if she wants to be with him that bad they can make it happen that she go to the jury with him. Memphis leaves and Cody tells her to watch herself. Cody is so stuck on keeping the committee happy, but Nicole knows that it is time to take out a strong player, namely Tyler.

Nicole is very upset, Cody gets to keep two of his allies when she has to make hers go. Time for the live vote and eviction. Christmas is first, she votes to evict Ian. Enzo for Ian, Da’Vonne for Tyler, Cody for Ian, Kevin for Tyler, Memphis for Ian, David for Tyler, Nicole for Ian. With a vote of five to three, Ian is evicted from the Big Brother house.

Ian says he us hurt in the game for being sent out of the house. He says he doesn’t feel betrayed by anyone because it is a game. He says if he was doing over again, he wouldn’t change his strategy. Julie calls Ian classy, he thanks her for the opportunity. Ian will be the first person to go into the jury house.

Time for the live HoH competition, Dani has decided not to use the replay power. This competition is called the Hydrant Hustle. On Julie’s go, they will hustle across the yard to collect hydrant puzzle pieces and bring them back to their stand. The goal is simple, assemble the puzzle correctly and buzz in. The first person to finish it correctly and buzz in, wins HoH.