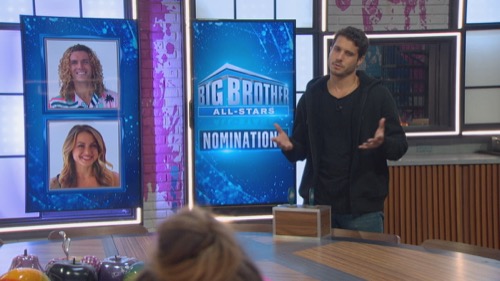 Tonight on CBS Big Brother 22 airs with an all-new Wednesday, October 7, 2020, episode and we have your Big Brother 22 recap below! On tonight’s Big Brother season 22 episode 27 “PoV and Ceremony” as per the CBS synopsis, “Tonight on Big Brother it is the Power of Veto competition and both Tyler and Christmas will be trying to secure their safety by winning the PoV.  Following the competition, we will find out if the winner uses the PoV.”

Tyler and Christmas are on the block, Cody nominated because they tried to flip the vote in the last eviction and get rid of Nicole. Tyler knows people want him out of his house, he needs to bring his A-game. The Committee alliance is done and Memphis doesn’t care at this point if Tyler goes home, he is a strong competitor and it would be good for his game if he goes home.

Nicole is happy that Tyler and Christmas are on the block, she just wishes that she put them there. Cody tells Nicole that he is 55% Christmas and 45% Tyler. He feels that Christmas is a bigger target and he wants to kill the version of the Wise Guys alliance that doesn’t include him. Tyler and Christmas had a final two for a long time, they swung and missed, so now it is each other for their own game. Enzo goes to see Nicole, he tells her that Tyler and Christmas came to him and tried to rope him into their plan to get rid of Nicole. He is playing this game meow meow sneaky.

Later, Tyler goes to see Enzo and tells him that he never thought Cody would put him on the block. Enzo just plays dumb, because he is the reason Tyler is on the block. It’s a mind game right now, and if it gets Enzo further in the game, he doesn’t care right now.

Christmas goes to see Cody, she tells him that she doesn’t take this personally, even though she is crying in front of him. She is truly upset at him, but she is trying not to show it. Going forward, she tells him that she still wants to play this game. Cody is not moved by the waterworks and hopes she doesn’t go on for too long because it is brutal. He feels horrible that Christmas feels horrible, but she did this herself. She tried to make a move and it exploded in her face.

Tyler tells Enzo about his previous alliance, thinking he is giving him intel and little does Tyler know, Cody already told him. Tyler tells Enzo that he needs to help him and go for this veto, Enzo agrees, but it won’t be to take him off the block.

Time for the Veto competition, Nicole walks into the backyard and feels that she is at a baseball game. She hears the crowd cheering, mitts, and baseballs everywhere, but what really catches her eye is the food. While they have been in the Big Brother game their former houseguests partied it up at a baseball game. In this competition, their goal is to arrange their photos from the game in chronological order. Here is how it works; they have to it their button to start the clock, then remove photos from the cabinet and placing them on stands.

They may have up to two photos in their possession at a time. They have to look for clues in each photo to figure out the chronological order the photos were taken. When they think they have the photos in the right order, hit the button to lock in their time. If they are incorrect they will hear boos from the crowd and must figure out where they went wrong. If correct, they will hear the crowd cheer. The person to finish putting the photos in chronological order in the shortest time will win. If they don’t complete the competition they will be maxed out at 25 minutes.

Tyler is with Cody and tries to show him the scenarios if he goes home versus Christmas. Then, he suggests that Cody use the Veto and put up Memphis. Cody tells Tyler he doesn’t want him to go, but he is having a hard time making a decision. Cody is trying to take out the emotions and just play and make moves strategically.

Time for the Veto meeting, Cody decides not to use it.