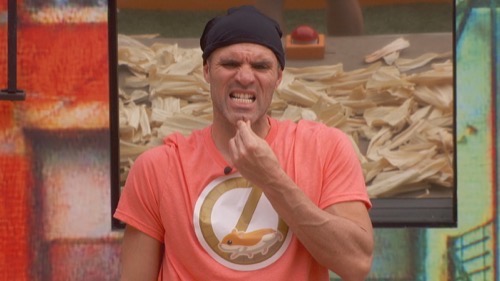 Tonight on CBS Big Brother 22 airs with an all-new Thursday, October 22, 2020, episode and we have your Big Brother 22 recap below! On tonight’s Big Brother season 22 episode 34 “PoV and Luxury Competition” as per the CBS synopsis, “Tonight on B&B All-Stars we will see who is being sent home either Christmas or Nicole.  Then we will see the final Head of Household competition.”

Enzo tells Christmas that he is trying to keep her in the house because he believes she would take him to the end. He believes that he has a better chance against her, than Nicole or Cody. He explains that Cody has a relationship with Nicole so it is tough for him. He tells her to throw Nicole under the bus, makes any deals that she can to get Nicole out and her to stay.

Nicole is sitting with Cody, she says she has been in the house more than any other player; she just past 238 days and it’s a huge milestone. If she can make it to the final two, she can be the first person to ever win this game twice. She just has to make sure to make Cody see that keeping her is in her best interest. Cody jokingly tells her that she has to go she can’t be a two-time winner. Cody says Christmas is going home, no worries. Meanwhile, Enzo is trying to convince Cody that Christmas is easier to beat.

Enzo is in the kitchen, he says to Cody and Nicole if this is a good final three to be in and Christmas is in the bathroom, she overhears. Enzo says he made a mistake, he meant to say final four. Enzo made a little mistake, he forgot that Christmas was still in the house. Christmas is not letting that one go, she knows what he said, she doesn’t think he is fighting for her and that it was pretty savage.

Christmas says that if she is going out this week, then she is going out with everything that she has in this game. She feels what Enzo has done to her is betrayal, she feels like a fool and believes their relationship is irreparable. Now, Christmas has to rethink her strategy to stay in the house.

Christmas goes to see Cody and tells him that Enzo has wanted Nicole out of this house from the beginning. And, if he takes her to the final three, she will take him to the final two. Cody is impressed, Christmas is fighting like crazy to stay in the house and in the final three.

Nicole is outside and she is congratulating herself for being the winner of Big Brother All-Stars. Over and over again she congratulates herself and tells herself to visualize it.

Cody tells Nicole that Christmas promised to take him to the final two if he keeps her. Nicole tells him that she is not doing it, and she is.

At the jury house, everyone is waiting for the next houseguest to arrive. Tyler thinks it is going to be Nicole, and it’s not, it is Memphis and everyone is shocked. Memphis says he was blindsided, and he brings a video to show them. The see when Nicole gets her first win as HoH, and nominates Christmas and Memphis. Then Nicole wins the Veto, she swept the week. Da’Vonne thinks

Nicole has rubbed people the wrong way, but the way she has played, she may win. The jurors are waiting for one big move and that is going to put that person up in the rankings. Da’Vonne says the only way Enzo can win is that he has to clip Cody. Memphis thinks Christmas is the most dangerous player, she will do anything to stay in the house.

Time for the live vote and eviction. Christmas gets up and addresses Cody, she tells Nicole that she loves and she has played a great game, then Enzo, she congratulates for getting third place, Cody she tells that if he keeps a previous winner beside him he has less a chance of winning than being with her. Nicole tells Cody that they have been playing for six years and as far as the game goes, she thinks that it is in his best interest to keep her.

Cody heads to the middle of the living room and casts his vote to evict Christmas. Cody, Enzo, and Nicole are in the final three.

Christmas is with Julie, she says she is in shock, she had a feeling, but it is still shocking. She doesn’t hold personal vendettas. Julie asked her if she would have taken Cody to the final two, she says probably yes because Enzo and she were shaky in the game in the end. In the goodbye messages, Enzo says she is heartbroken, he tried hard to keep her. Nicole says that she has been working with Cody and Enzo since day two. Cody tells her that she respects her in this game and what Memphis did, the two Wise Guy alliances.

The final three get some love from home via video before they make their final push in the game. Nicole says it feels amazing to hear Victor’s voice and that he is proud of her. Julie says Enzo’s kids are hilarious and adorable. Enzo says he wants to win the game so he can bring the cheese back to his kids. Cody says it is incredible to hear his fiance’s voice, he has taken it for granted. Julie tells the three to prepare for the final, three-part HoH competition.