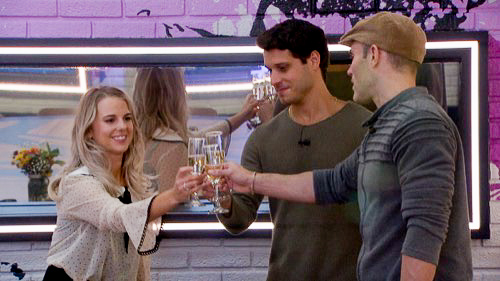 Tonight on CBS Big Brother 22 airs with an all-new Monday, October 26, 2020, episode and we have your Big Brother 22 recap below! On tonight’s Big Brother season 22 episode 35 “Final HoH – 3 Parts” as per the CBS synopsis, “We are down to the final 3 Cody Calafiore, Nicole Franzel and Enzo Palumbo. The last Head of Household competition has three parts. The final episode is Wednesday, Oct. 28 when two houseguests will stand before the jury and make their best case to win the season.”

Its day 83 inside the Big Brother house and it’s been almost three months that Cody, Enzo, and Nicole are in the house. This is not the first time Enzo has made it to the final three, this time, he put his social game at the forefront and he made a final two with Cody. Because of his social game, he got into many alliances. And even though he wasn’t part of other alliances, the house guests told him about them and protected him. It was all about telling people what they wanted to hear. A lot of people thought they had him in their back pocket, but his true loyalty was to Cody.

He made sure to win some competitions, he wanted it to look like he could win as well and just wasn’t being carried forward. At this point, it is everyone for themselves. When he left home he told his kids he was winning for them, and that is all he wants to do. This time he is not letting himself be clipped in the final three, he is winning this for his kids.

Coming into this house, Cody wanted to be a triple threat. He wanted to be the best strategic, social, and physical player in this house. Strategically he knew it was important to win the first HoH, that win gave him a lot of power to develop a lot of meaningful relationships in the house. He wasn’t just working small deals, he was working big ones as well. Through his biggest alliance, he was able to get rid of some very strong players. He won seven competitions this season, which is more than anyone else in the house.

Playing Big Brother was a full-time job for him this season, when he wasn’t winning competitions, he was working on his social game. He even had to go through some conversations that he didn’t want to. But, winning this game means that he had to sometimes not play nice and take shots at some really big players. Despite that he was a huge threat, he never saw the block this season. He fought for the last Veto and secured his place in the final three. There is no way if someone looks at him at the end of this game, they can say he got there by accident. Last time, his loyalty to his ride or die cost him five hundred thousand dollars. This time, nobody is getting in his way this time to win, he didn’t come back to get second place.

Coming back into the house for the third time as a former winner, Nicole knew she was going to be on everyone’s radar. She surrounded herself with strong players so she could stay off the block. On day one she made a final two with Cody. She also made one with Ian, so eyes were not on her, his being a former winner. Dani and she had a close relationship and worked together in the game. She let her allies take the shots for her. Even with the committee alliance, it wasn’t always smooth sailing. She wanted Ian to stay, but she had to vote him out because she had to keep Tyler who was in her alliance.

She kept a low profile, but that was lost during the triple eviction. She was put up on the block beside David but managed to stay in the house because of her relationships with the stronger players. She managed to win the HoH when it counted and got Memphis evicted from the house. Even though some people think that Paul was robbed when she won in season 18, she knows that she deserved to win and she feels she is the best player of all time. She wants to be the winner who has won twice.

Janelle, Kaysar, Keesha, Nicole, and Bayleigh join each other for a video conference to discuss the final three in the house. Nobody is surprised that Enzo, Nicole, and Cody are in the final three. Janelle thinks that Cody had his hand in too many candy jars, if they compare notes, it will come back to bite him. Bayleigh doesn’t think that Nicole has made any big moves to win the actual game and since she decided to ride Cody’s coattail.

Keesha thinks Cody had the best strategy, he is a good game player. Kaysar thinks Cody’s best move was winning the first HoH. Nicole thinks that if someone decides to cut Cody, it will solidify their win. Kaysar thinks Enzo played a really good game. Janelle says Enzo played a really good game and he is so likable. Keesha says you have to give it to Nicole, no matter her gameplay, she made it to the final three.

It is time for part 1 of the final three-part HoH. The house guests are dressed like zombies, are come out of graves, then stand up on pedestals. The winner of this competition will automatically advance to part 3 where the winner of that competition will single-handedly decide who they want to sit next to on finale night. On the gravestones, it is written: RIP Enzo, this cat ran out of lives – In loving memory Nicole, the destination funeral was amazing – Here lies Cody, he lived every day like it was AB day.” This competition is simple, the last zombie on their disk will win the first part of the HoH competition. This is BB Scary-Go-Round. The house guests hold a rope and are suspended and standing on to a small disk.

Cody slips off the disk and has to reposition himself before he falls off. The competition is hard, they are banging into a haunted house and a large moon. The speed keeps increasing and green goop is thrown at them which is making their hands slippery and harder to hold on to the rope. Enzo is down, he is eliminated. Now it begins to rain and it is freezing. Nicole figured out a way to lean back and avoid the moon. Cody is down and eliminated. Nicole has won the first part of this grueling HoH competition.