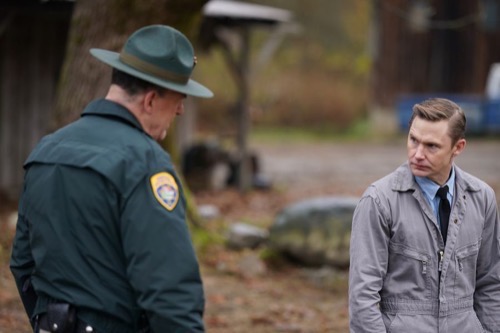 Tonight on ABC their new thriller by David E. Kelley, Big Sky premieres with an all-new Tuesday, December 15, 2020 episode and we have your Big Sky recap below.  On tonight’s Big Sky season 1 episode 5 Fall Finale ‘A Good Day To Die,’ as per the ABC synopsis, “Jenny and Cassie feel as if they’re closing in on Legarski, but they are racing against the clock as he and Ronald are preparing to move the girls.

Jerrie makes one last attempt to convince Ronald to let them go. Elsewhere, Cassie visits Merilee to question her about her husband and Ronald aggressively confronts his mother.”

We see Legarski beside his wife in bed and he envisions himself hitting her on the head with a hammer. She wakes up and asks him what he is doing. He doesn’t say anything and then she says he is scaring her. He admits that her dancing with another man drives him crazy, he drove her to that dance, and she deserves better. He says things are going to change. He is going to take down the TV and put up the Rockwell print that she loves. He is going to turn a new leaf. He asks if it was Tre Lopez she was dancing with, she says no.

Danielle’s parents are in the sherriff office, they find out that they still don’t know where the girls are. Her father begs him to find them. Meanwhile, the girls are still stuck in the container, they are singing to pass the time. The door opens, it is Ronald, he asks Grace how her leg is. Danielle says it is pussy and he can suck on it. Ronald reminds her that it is her unkindness that got her here. Danielle really pushes Ronald, she tells him that the pretty girls couldn’t both to look at him and probably called him a freak. He has been the object of hate and ridicule his entire life.

She asks if he wants to beat the crap out of her, then she tells him to do it, but maybe he is afraid that she would beat the crap out of him. He tells her nice try. Then he says he has good news for them, today is the first day of the rest of their lives. Jerrie says she doesn’t know what he means about that but it probably isn’t good.

Ronald heads outside and he notices that something is different, some was in there. He calls Legarski and tells him that somebody was there. Legarski shows up, they see the tire marks and it looks like another truck. Ronald says that milk bottles are broken inside as well. Legarski shouts at him that the walls are closing in because he took these girls. Ronald says hey are closing in because he killed a cop.

Cassie tells Jenny that the building they were in has an underground, and the tracker on Legarski’s truck shows that he is back there right now. The two women head out.

Meanwhile, we see Ronald is in his truck with a girl named Page, Legarski pulls him over and asks him to get out of the truck. Legarski tells Ronald and Sage to get out of the truck. He tells Ronald that he can bring him in and this will go on his record, or he can help give her another life and save men like him. Back to the present, Ronald is cleaning up the broken bottles.

Grace says if she gets out she wants to spend more time with people like her grandparents. Danielle tells Grace that she is there because of her, because she is so stupid. She says it will be on her tombstone, she got her little sister killed. Jerrie says she would go see her parents, as much as they hate her, she misses them.

Cassie and Jenny arrive, they go inside and Legarski is there; they pull their guns on them. They go downstairs and the container is empty. Walter is there, Legarski gives him heck for coming down on him. Walter tells him that the women put a GPS tracker on his vehicle. Walter asks what he was doing out here. Legarski says he can do whatever he wants to and he should be ashamed of her. While this is all going on, Ronald has the girls in the back of his truck tied up.

He brings them to the vacant bar where he and Legarski hang out. Legarski shows up and tells Ronald that after today he is out of the kidnapping business. Then he tells Ronald that this whole thing is causing problems in his marriage, his wife went dancing last night with some customer at the quilt shop. Legarski says it is a cry for help, he is going to try to improve, be a better man, she is all he has got. Ronald tells Legarski that he is sorry he took the girls, he got angry and he made a mistake.

At the station, Walter arrests Jenny for criminal stalking, she says it was all her. Cassie walks out. Ronald cleans up the girls, Jerrie tries to appeal to him and tells him that it is not to late to do the right thing, just let them gone. He says he hopes this is the right thing for her, that she will be safe. He says he is sorry. Ronald goes to the front of the bar and asks what is going to happen to the girls.

He says he is weak and not equipped to handle this whole thing. Then he tells him that Cassie and Jenny are checking out the truckers, Ronald says he is careful, they have nothing on him. Legarski replies that even though they don’t have anything on him, it doesn’t make him in the clear.

Carrie returns to the office, Denise says they found the fisherman’s truck.

Ronald is home, he tells his mother he doesn’t like her hovering. She says she doesn’t like what he is up to, she has a feeling it has to do with the missing teenagers. Then she tells him that he is a sexual pervert, he grabs her and puts his two hands on her throat and starts to choke her, but lets her go and tells her never to call him that again.

Legarski goes to see the girls, he tells them that they clean up well. Jerrie tells him to let the girls go, she will make him more money that he could dream of. He tries to tape on Grace’s mouth and she freaks out.

Ronald goes back to the quilt store, Legarski’s wife tells him that they can’t be friends, she is married. He says ok, he will remember their dance. He kisses her on the cheek, then the lips ad says goodbye to Merilee. Ronald leaves and Cassie walks in, she tells Merilee that her husband may have something to do with the missing teenagers. Merilee says he is just the same as he has always been, a creature of habit.

Ronald returns home, his mother has an ice pack on her neck, he says he is sorry. He is under stress, his business associate has led him down a bad path. Ronald tells her that his partner has the missing girls, and he is afraid that he could be in danger. He assures her that he is going to handle it, he has a plan.

Legarski is with the girls and tells them that their ride is there. But it is not their ride, it is Cassie and when she finds Legarski, she pulls a gun on him. He tells her that he is going to reach for his gun, and put her under arrest. Then Cassie tells him that she just came from Merilee’s quilt shop, it would be a shame to make her a widow. Legarski says he is going to count to five and she better put her weapon down or he is going to shoot her. Too late, Cassie shoots him.