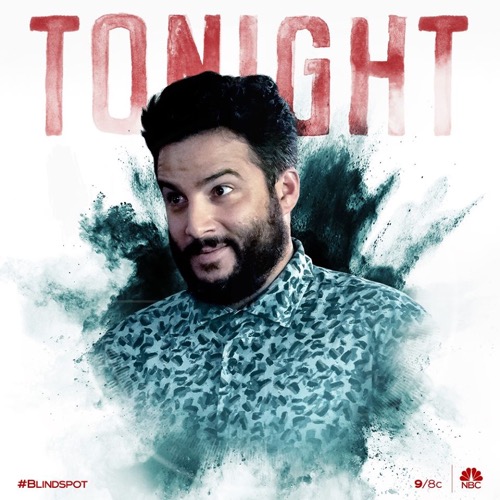 Tonight on NBC Blindspot airs with an all-new Thursday, June 4, 2020, episode, and we have your Blindspot recap below. In tonight’s Blindspot season 5 episode 4 called “And My Axe!,”as per the CBS synopsis “In order to stop a terrorist group from procuring a deadly chemical weapon, the team must remember key details from their first days at the FBI.

Madeline Burke is trying to deploy some kind of chemical bomb. The evidence was on the RFID drive that the team recovered from their dead Dabbur Zann associate and its taken them this long to decrypt it because of their current computer. Every day computers are slow. They are not like the FBI system that Patterson was used to working with and so it was going to be even longer to find out where the bomb or what it can do. Patterson and Rich did find a date within the file. They hadn’t thought the date was anything important and it was to Zapata. Zapata said that was the date she joined the FBI.

It was her first day. She had taken down a cabal who was working with chemicalized weapons and she couldn’t remember much about it because as a member of the team she has taken down plenty of criminals. What Zapata did remember is that it was the day she met Reade. Patterson and Rich both told her that she had to try to recall the case because that’s the only thing that might help them now and so they advised her to tackle her memories. They knew how much it would hurt to remember him. They just couldn’t afford to let sentiment derail them. Patterson and Rich walked through the day with Zapata.

Zapata told them how she met Fischer. He was the one telling the new recruits where to go and both Reade and Zapata had been new that day. They also tried to get the same workstation. They had argued over it and then they got to talking. They disagreed on almost everything. He was a tea person and she was a coffee person. The only thing they could both agree on was that they were ambitious. They each had asked Fischer about working on the task force with Weller and they were advised to be patient. Which they totally ignored. Reade and Zapata both wanted to move up in the FBI and they wanted to go it fast.

They worked the case together because together was the fastest way to making a great impression. They had Patterson for the first time that day and Zapata hadn’t remembered it until Patterson pointed it out. Zapata just remembered dealing with a pesky techie. She said the person said “opposite, opposite” and Patterson is the only one who says that. Therefore, she was an annoying techie. Patterson hadn’t let much of an impression on Zapata and that’s because Zapata was remembering Reade. She wasn’t recalling anyone or anything else. She tried to look back and all she saw was Reade.

Losing him has affected her so much. Zapata was a little lost without him and that’s why she was focusing memories of him and not the case. Zapata later stormed out because she didn’t want to remember anything else. Patterson was doing her best to help Zapata remember and Rich meanwhile was carrying out a favor for Jane. Jane had felt bad for Weller. He missed his daughter and he regretted not being there for her with her birthday. He doesn’t know what Bethany was up to. Jane had felt bad about missing so much and so she asked Rich to track down Bethany. Bethany and her mom went into hiding after the team became targets for the FBI.

Her mom is a US Marshal. She knows how to hide and so Jane thought Rich would have a hard time tracking him down, but he eventually found them and he found out that Bethany was sick. She was admitted to the hospital under a false name. Rich doesn’t know what’s wrong with her and he thinks they should tell Weller what they know. Jane disagreed. She doesn’t want to upset her husband over something they couldn’t change. She told Rich to keep what he knows to himself and so they withheld the truth from Weller. They didn’t tell him about his daughter. They only brought up Zapata with him and together they all focused on Zapata.

Zapata remembered that they interviewed a scientist. Zapata and Reade hadn’t gotten far with this interview before it was shut down by Fischer and it turns out this scientist came from an influential family. The scientist was Dr. Kerry Coleman. Coleman worked at a large chemical company and she disappeared after the failed interview. No one has seen her since except for Jane. Jane said she winged this woman just the other day and so Coleman was alive. She was a part of Madeline’s attack plan. She was here in Europe and she was dangerous. The team asked Zapata was else she remembered about Coleman.

Zapata remembered she and Reade pursued the case. They were found out by Fischer who then turned them over to Weller and Weller had reprimanded them. They had gotten so chewed out that Reade considered transferring to a different branch. Zapata cried when she remembered that part because she thought if she had just let him go then he would still be alive today. Zapata’s friends supported her as she was remembering. They told her it wasn’t her fault and that Reade did the job he loved. They also got Zapata talking about the case again. She remembered connecting Coleman to a chemical storage plant.

She was going over the case still when Zapata announced her news. She told Rich she was pregnant and he naturally freaked out. Rich had just gotten through telling Weller Bethany was sick with an infection. He and Jane had tried to be there for Weller and he pushed them away because they tried sitting on the truth. So, Weller was ticked off. Jane was feeling guilty. Rich was in the middle with them and now he’s in a middle with Zapata and everyone else. She was pregnant and she wanted to keep it hidden. She thought the team would freak out if they knew. Zapata finally figured out why she wasn’t herself lately and she couldn’t tell anyone besides Rich because it could compromise the mission.

Zapata’s information had helped the team. They found out where members of Coleman’s team were and the three trigger people went there. Including Zapata. Zapata didn’t let her pregnancy stop her from putting herself in danger and that turned out to be a good thing. She ended up helping Weller and Jane when they needed it. Only Coleman still got away. The team missed their chance at capturing her and they had to split up to head back to the bunker. Jane and Weller weren’t talking all that much. He was still upset about the whole Bethany thing. Even as Jane apologized for making the wrong choice.

And splitting like they did had made it easier for Madeline’s people to get to them.

Zapata was attacked, Jane was injured, and Weller was kidnapped.