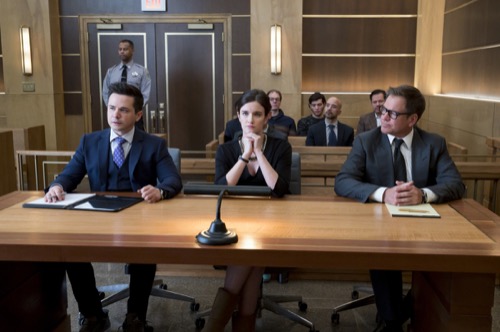 Tonight on CBS their drama Bull inspired by Dr. Phil McGraw airs with an all-new February 17, 2020, episode and we have your Bull recap below.  On tonight’s Bull season 4 episode 15 called, “Flesh and Blood,” as per the CBS synopsis, “Bull assists in the murder trial defense of an old friend, an in-debt professional gambler accused of killing her wealthy father to gain her inheritance.

Knowing their client had a complicated relationship with her father, Bull and Benny enter into voir dire looking for jurors who sympathize with dysfunctional family relationships.”

The firm was representing a woman an old friend of Bull’s. The client is Vivian Cahill. She moved back home to take of her father, Terrence Cahill. He was wheelchair-bound after a series of strokes. He couldn’t take care of himself and the hired help couldn’t be with at him 24/7. Vivian moving back had seemed like a good idea and it was working until her father began criticizing her lifestyle. Vivian’s father didn’t approve of her career. She was a professional poker player and he had called her a degenerate because of it. He also didn’t want to fund her lifestyle. He was a multi-millionaire and he could easily have wiped away Vivian’s debt.

Vivian owed money. She was three hundred thousand dollars in debt. She couldn’t get anyone to front her the money anymore and so that’s when the prosecutor assumes she turned to her father. Father and daughter didn’t get on. Vivian claims she later came downstairs and she found her father murdered. He was bleeding from a wound to the head. It appeared as if someone had used a poker on him and, unfortunately for her, the prosecutor believes she was responsible. She was now being accused of the murder. The prosecutor believes Vivian killed her father to inherit his millions and get herself out of the whole.

There were witnesses that all testified how desperate Vivian was. She was actively promising to pay people off the moment she came into her inheritance and sometimes these people came to her home where her father was. Vivian herself believes someone came to kill her father to get even. She doesn’t know whose behind it and she needed Bull’s help. Bull offered to assist. He remembered her from the days they used to play poker together and he put Benny on the case because Benny is the best lawyer he knows. Only Benny wasn’t feeling so well. Benny later passed out in court from some illness and it left Vivian without a lawyer.

The problem with Benny was his appendix. He was going to be in the hospital for weeks potentially and so Chunk offered his services. He was a law student after all. He could work as long as he was supervised and Benny could supervise him from the hospital. Chunk also wanted this chance to prove himself. He made his case to the judge and the judge accepted him as the first chair in Vivian’s defense. She agreed to it as long as he checked in with Benny. Benny was up for it and so it was just his nurse that was getting in the way. The nurse wanted Benny to rest. Benny couldn’t do that because he was worried about the case and so he was frequent contact with Marissa.

Besides that, Chunk was doing well for himself. He was able to introduce a potential witness in the case and he showed how the police overlooked said witness by focusing their entire investigation on Vivian. Chunk thought he had his witness on the backfoot only he was wrong. His theory about the guy Vivian owes money to coming over to kill her father had been false. The guys died two days before her father and so he couldn’t have been their culprit. It also destroyed Chunk’s theory in front of the jury. Chunk suddenly had to find a new suspect to take the place of his last one. He relied on Danny and Danny tried to give him what she could.

The dogwalker did see someone in the neighborhood. Danny was going to use security footage to see if she could get an image of this man’s face and while she was doing that – Chunk decided to put Vivian on the stand. Vivian had been relieved when she found out she wasn’t responsible for her father’s murder. She had loved him and so Chunk wanted the jury to see that. He put her on the stand. He asked her about the gambling and the debts. He got her to admit she would give the money back if she could get her father. Her father was verbally abusive to her and still, she loved him.

Danny also found this mystery man. The man was identified as Daniel Zabinski. He was 18 and lived boroughs away. He had no reason to be in the area. He was also the son of Celeste Zabinski. She used to work for the Cahills and she has fired seven months ago. She and her son were just evicted from their home and so Daniel could have been angry. Angry enough to kill. He was another suspect that the cops failed to investigate and Danny found out more. She found Celeste was on the payroll yet no one ever saw her. Celeste was being paid for eighteen years and it turns out Terrence Cahill was only doing so to keep her quiet.

Daniel Zabinksi was Terrence’s son. He was, therefore, Vivian’s brother and she recalls there been a rough patch between her parents eighteen years ago. She said it was so bad that they started living in separate bedrooms. Chunk later used that in court. He put Daniel on the stand and he grilled Daniel until the young man confessed everything. He confessed to murdering Terrence Cahill. He said he didn’t mean to do it. It just happened after Terrence grabbed the poker and tried to threaten him with it.

And with Daniel’s confession, Vivian was released and she was now free to live her life.

And Chunk didn’t do so bad for his case.