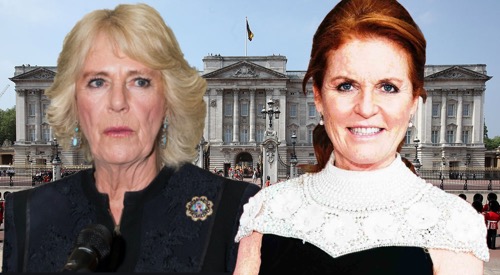 British Royal News suggests that there might be another feud brewing behind the scenes over at Buckingham Palace. Or at least, that’s what the British tabloid press want everyone to believe. As a matter of fact, there’s a new report that suggests Camilla Parker-Bowles is no fan of Prince Andrew’s ex-wife, Sarah Ferguson. Even though the couple split back in 1996, Sarah is still very much a part of the family, thanks to the two children she shares with Andrew: their daughters, Princess Eugenie and Princess Beatrice. Here’s what you need to know.

British Royal News: Is Camila Parker-Bowles Feuding With Prince Andrew’s Ex-Wife? – According to Australia’s New Idea, there might be a good reason why Camila Parker-Bowles opted out of Princess Eugenie’s royal wedding to Jack Brooksbank back in October of 2018. That’s because she wants to keep as far as possible from Eugenie’s mother, Sarah Ferguson. Things are apparently so bad between the two royal ladies that their relationship can no longer be fixed.

To make matters worse, Camilla is none too pleased that Fergie is apparently cashing in on her royal association with her latest business venture. In fact, Camilla allegedly thinks that Sarah is a “shameless opportunist” to say the least.

A lot of royal observers also noted that Sarah Ferguson used to be very close to the late Princes of Wales, which has probably done nothing good for her and Camila. While Buckingham Palace has not confirmed nor they denied a possible rift between the two, many royal fans have noticed that it’s been a very long time since Camila and Sarah have been photographed in the same place at the same time, let alone even in the same room together.

British Royal News: Will Camilla Make It For Beatrice’s Wedding? – With that said, it will be interesting to see if Camila Parker-Bowles will attend Princess Beatrice’s upcoming wedding to her fiancé Edoardo Mapelli Mozzi in May. That, or she might have another royal engagement scheduled in for that same day. We will definitely keep you updated!

In the meantime, come back right here for all of the latest news and updates on Prince Harry, Meghan Markle, Prince William, Kate Middleton and the rest of the royal family.