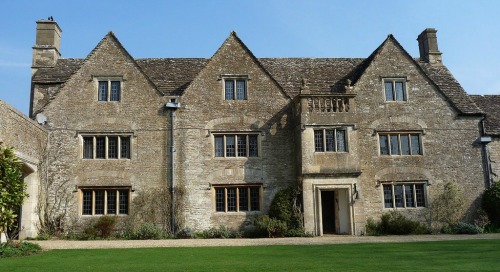 The former home of Camilla Parker-Bowles and Andrew Parker-Bowles is currently up for sale. The estate, called Bolehyde Manor, has eight bedrooms, a tennis court, a swimming pool, guest lodging, stables, and more than 80 acres of farmland. It’s asking price is 3.75M.

The medieval house, which is near Chippenham, Wiltshire, hasn’t seen much press over the past 35 years. But now that the estate is up for sale, it’s back in the news and in the public consciousness.

It was back in 1974 when Andrew Parker-Bowles and Camilla Parker-Bowles were newly married and were looking for a country home. Bolehyde Manor fit the bill, and Camilla raised the couple’s two children there while Andrew was frequently away on military duty.

Prince Charles became a friend of the couple and a godson to their son Tom Parker-Bowles, spending much time at the estate.

And if that history weren’t interesting enough, the estate is reportedly haunted by a ghost who apparently has a sense of humor. According to the Daily Mail, Camilla Parker-Bowles’ biographer Penny Junior said that she “would become aware of its [the spirit’s] presence when she was watching television, and the ghost would sit beside her and change the channels.”

The biographer continued: “She never saw it, but she could feel it sitting next to her, and she would laugh about how she and the ghost always wanted to watch different programs.”

Camilla and Andrew eventually sold the estate in 1985 to Earl (Simon) Cairns and his wife Amanda. Bolehyde Manor didn’t see much attention publicly for many years, until 2011, when Kate Middleton’s parents considered the estate as it was being offered for sale again.

Carole Middleton and Michael Middleton ultimately did not make an offer on the estate, but now it is up for sale again. Who do you suppose will wind up in this “haunted” estate with its rich history? Be sure to keep CDL bookmarked so you don’t miss any of the latest British royals news and updates.