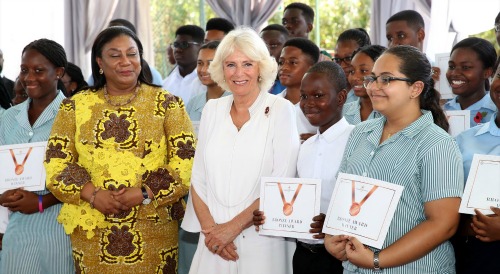 Recently, Prince William made a controversial comment about coronavirus. Just one day after that comment, the Camilla Parker-Bowles joked about “self-isolating” which has made headlines. Find out exactly what was said, what the context was and if she made a verbal boo-boo by speaking before thinking.

It was recently reported that while touring Ireland, Prince William joked that he and his wife, Kate Middleton, were “spreading coronavirus.” He added while speaking with a National Ambulance Service paramedic at Dublin’s Guinness Storehouse,

“I bet everyone’s like, ‘I’ve got Coronavirus, I’m dying’, and you’re like, ‘No, you’ve just got a cough.’ Does it seem quite dramatic about coronavirus at the moment? Is it being a little bit hyped up do you think in the media?”

According to People magazine, Camilla Parker-Bowles and her husband, Prince Charles, visited the London Transport Museum. While there, the Duchess of Cornwall went inside a one-person air-raid shelter. She joked that she was “self-isolating,” which would make her the second royal to publicly poke fun at coronavirus.

In addition, it was recently speculated that Queen Elizabeth II recently wore long white gloves while handing out awards. Her wearing gloves isn’t that unusual and she has been spotted donning them before. However, they are usually at other types of events, never while handing out awards. So, it struck the public (and media) as a bit odd. This started the rumor that she was trying to stop herself from getting infected with coronavirus.

Something similar was speculated about Camilla a few weeks ago when she attended an indoor event. She had on thick riding gloves and kept them on even while shaking people’s hands.

In the United Kingdom, there are 85 cases, but no deaths have been reported yet. Worldwide, there are a total of 94,000 people who have been infected with the virus and as of Wednesday, just over 3,000 have died from the sickness. Most of those deaths occurred where the virus was first spotted — in China.

A royal source told People magazine that Prince William takes the threat of the illness seriously. The Royal Family is following the advice of the Public Health England and the Department of Health, and it’s just “business as usual” for right now.

Be sure to catch up on everything happening with the Duchess of Cornwall right now. Come back here often for Camilla Parker-Bowles news!