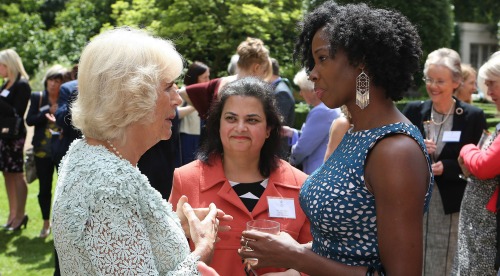 The Duchess of Cornwall has been an advocate of spreading awareness of, and putting a stop to domestic violence. In fact, a few weeks ago, Camilla Parker-Bowles revealed that she has several friends who have been victims of family abuse. Now, she is launching a hashtag that will hopefully go viral: #EveryonesProblem.

For the past 10 years, the Duchess of Cornwall has been a passionate advocate for domestic violence victims. Last month, she hosted a reception in which she listened to survivors’ stories. She is so moved by their bravery to get through abuse that one woman actually brought her to tears. In the past, Camilla admitted to having nightmares about their stories.

Recently, she said that domestic violence is everyone’s problem and she is taking that statement and doing what she can to spread awareness.

Women of the World Festival

On Friday, the Duchess of Cornwall will join other charities to launch an online campaign for the cause. Attending the Women of the World (WOW) festival, which is being held in London, two of the organizations Camilla has worked with closely in the past. Those are Refuge and SafeLives.

The Duchess of Cornwall will speak about working with domestic violence organizations and will celebrate the victories. However, Camilla will also make it clear that there is still much work to be done. According to Harper’s Bazaar, Britain’s Office of National Statistics reports that in 2018, nearly 8 percent of women and just over 4 percent of men suffered domestic violence. Those numbers amount to 1.3 million females and 685,000 men and that is just in the United Kingdom.

Refuge and SafeLives are backing the digital campaign with Camilla and hopefully, #EveryonesProblem will go viral.

Camilla spoke about the continued problem of domestic violence and silence. She also addressed that abuse can affect anyone, no matter who you are. She said,

“I find it almost impossible to think that any friend of mine might be living under that horrific threat, without my knowing it, but that is the power of coercive control and violence in the home… silence is corrosive; it leaves women, children and men carrying the burden of shame. It prevents them from speaking out about the abuse and it prevents them from getting help. And at its worst, it can be fatal.”

Be sure to catch up on everything happening with the Duchess of Cornwall right now. Come back here often for Camilla Parker-Bowles news!

🎥 Today, The Duchess of Cornwall attended the Grand Opening Session of the Women of the World Festival and spoke about why domestic abuse is #EveryonesProblem.

Today on #InternationalWomensDay, we are shining a light on survivors of domestic abuse around the world.