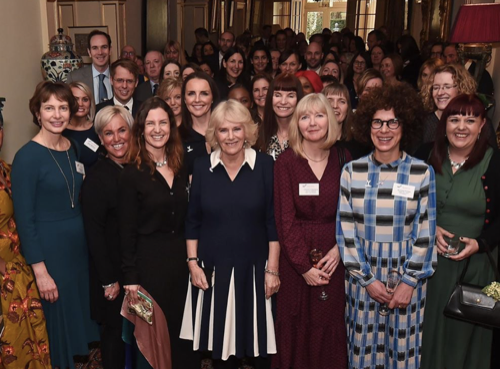 Camilla Parker-Bowles recently hosted an event for SafeLives and afterward, spoke at an interview regarding domestic violence. This is not the Duchess of Cornwall’s first SafeLives event. Preventing and creating awareness of just how many people live with domestic violence is an issue Camilla is passionate about. Keep reading to learn more about what she had to say about this important topic.

SafeLives Charity Event – On Wednesday, Camilla hosted an event for the domestic violence charity at Clarence House in London. The UK-based organization is dedicated to ending abuse, according to its official website. It states that their goal is to end domestic violence before it starts and before it has the chance to destroy lives.

Camilla Parker-Bowles on Taboo Topic – According to Daily Mail, Camilla told event attendees that every single time someone talks about domestic violence, the taboo around the subject weakens. She urged everyone to share their story. She added,

“No one knows what goes on behind any front door. It doesn’t matter who you are.”

Duchess of Cornwall Had Nightmares – This is not the first time Camilla has attended an event for SafeLives. In 2016, she listened to women’s stories of abuse. What she heard gave the royal nightmares. She called the women brave for standing up and telling others their stories. She was also taken aback by how many people are affected by family violence not just in the UK, but across the world.

Today, The Duchess of Cornwall hosted a reception at Clarence House to mark the 15th anniversary of @safelives_ , a charity working to end domestic abuse for good. Her Royal Highness welcomed staff, supporters and people who had been helped by SafeLives. The Duchess first learnt about the work of SafeLives during a visit to the charity at the beginning of 2016, and since then has worked with the organisation to help them support more people in need. During a speech today, HRH said: “I visited SafeLives for the first time in 2016 and, as I have said on numerous occasions, that memorable day fired my interest in domestic abuse. ”I did know of people who had suffered from it, but I was both shocked, and horrified by just how many thousands of people across the world live with it. I had the privilege of hearing incredibly brave women (some of whom are here today) standing up to tell their stories. Harrowing stories that reduced many of us listeners to tears. “But with each story that is told, the taboo around domestic abuse weakens and the silence that surrounds it is broken, so other sufferers can know that there is hope for them and they are not alone.” ? PA

Firing Up Royal’s Interest in Domestic Abuse – Camilla said that the fateful day would change her life forever. Preventing and stopping domestic violence became her passion. She explained,

“That memorable day fired my interest in domestic abuse. I did know of people who had suffered from it, but I was both shocked and horrified by just how many thousands of people across the world live with it.”

The 72-year-old has been trying to pave the way to unite various organizations. In 2019, Camilla penned a letter of support for a conference in Wales that was led completely by abuse survivors.

What do you think of Camilla’s work to end domestic violence? Are you surprised survivors’ stories gave her nightmares?