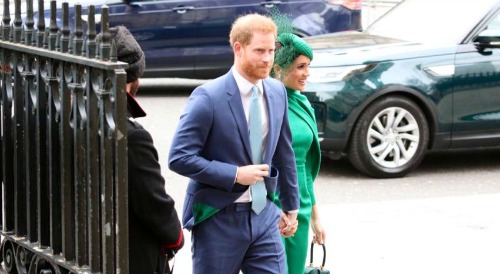 Camilla Parker-Bowles spent the past year planning and organizing a digital domestic violence campaign, #EveryonesProblem. It was well-known among the Royal Family when it was beginning. Meghan Markle reportedly demanded photos of a theatre visit be published the same day as the family violence campaign, leaving Camilla infuriated and devastated.

It has been well-publicized that Camilla was launching a digital campaign to raise awareness and try to put a stop to domestic violence. A hashtag was even created, #EveryonesProblem and two major organizations, Refuge and SafeLives backed the campaign. In fact, on March 6, Camilla made an emotional speech about family violence at the WOW Festival in London.

According to the Daily Mirror, Meghan broke a pledge by overshadowing Camilla’s important digital campaign. Now, it is understandable that people have different personal and official engagements that might occur on the same day. That doesn’t appear to be the issue in this situation. It has to do with the timing of Meghan’s post, according to the royal insider.

The Duchess of Sussex reportedly demanded that photos of herself and her hologram be published on the same day as Camilla’s campaign.

A source explained that Meghan could have waited before publishing her photos of her private visit to the National Theatre. However, she allegedly demanded that they be posted on the very same day as the domestic violence digital campaign… even though it had been planned for an entire year.

“Meghan broke a pledge not to overshadow Camilla’s vital campaign against abuse by demanding the pictures of her private visit to the National Theatre be published the same day.”

The insider stated that Meghan overshadowing the planning domestic violence campaign has “infuriated” and “devastated” the Duchess of Cornwall. Apparently, it was agreed that Camilla’s digital campaign needed to take precedence due to its importance.

“Of course it was known Prince Harry and Meghan would be doing engagements this week, some privately, but everyone was in agreement that Camilla’s speech should take precedence.”

What do you think about this situation? Was Meghan Markle wrong for overshadowing the Camilla Parker-Bowles’ domestic violence campaign? Or did the Duchess of Sussex have a right to demand her photos be published on the same day?

Be sure to catch up on everything happening with the Duchess of Cornwall right now. Come back here often for Camilla Parker-Bowles news, and rumors!