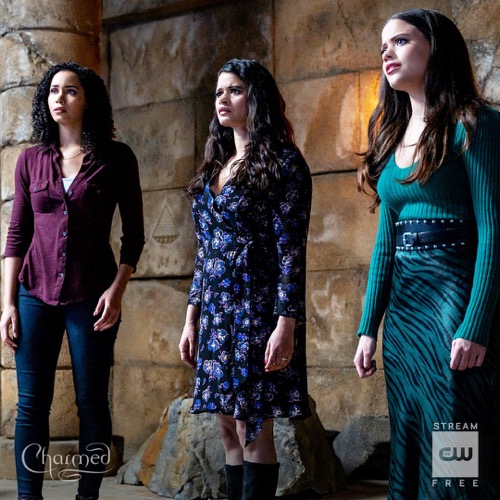 Tonight on CW their reboot of the 1980s popular show Charmed airs with an all-new Friday, February 21, 2020 episode and we have your Charmed recap below! On tonight’s Charmed Season 2 Episode 13 “Breaking The Cycle,” as per the CW synopsis, “Harry can’t expel his past so The Charmed Ones rush to his aid but ultimately he makes a deal with the devil. The Charmed Ones continue their efforts to restore the Power of Three, they find themselves in the gravest circumstance yet.”

Harry comes face to face with Jimmy. Jimmy tells him they are going to get to the truth. H gives him a location to meet up at in Maine. Harry wakes with green running through his veins.

Maggie comes to Harry. She had a premonition, the dark lighter is back. Harry only gives her a look. Meanwhile, Macy is digging for something.

Mel wakes next to Rubes. Its early and her friends are knocking at the door. She has the only TV. Meet gets a text. Family stuff, she tells Rubes. The sisters meet up to talk about how the dark lighter is back. They meet with Harry, who has a plan. He is going to meet Jimmy. They think this is a terrible idea.

Harry goes to meet Abigail. He has a plan to use a bottle to catch Jimmy’s soul but if it doesn’t work he needs her to kill him. She agrees but she wants one encumbered night with him. He agrees. They arrive in Maine a short time later to find Jimmy and the entire town is frozen.

The girls are trying to lift the lock when the voice of a so-called guardian speaks to them. She is no help.

Abigail and Harry find a girl who is mobile and not frozen. She looks scared.

The girls continue to dig through old books when they come across something that tells them they aren’t the first charmed ones.

The young girl tells Abigail and Harry that it was she who made the town stop. A man tried to grab her after school, she yelled stop so everything did.

The girls try to get the guardian to answer their questions but she won’t. Something is activated. Macy thinks this is all a test.

Abigail and Harry have the girl show them where the man is who tried to take her. Meanwhile, the girls are being tested as they must tell the truth or risk being injured by laser beams that have appeared. Macy finally tells Maggie that Parker is alive. She is shocked. Mel admits their father knew that Maggie was his biological daughter. The more truths they share, the beams one by one disappear. Finally, Macy admits she is having a hard time being one of three. The last beam drops and the door opens.

The girls head into the door to find the tree. The find poison from the dark lighter. As they look around more, the guardian appears. She was once a charmed one with her sisters. She is here to help so they don’t make the same mistakes she and her sisters did.

Abigail and Harry are being chased by a group of men who aren’t frozen. When they are cornered, Abigail uses her powers to kill them.

The Guardian talks to the girls about how one of them will eventually die. She is here to tell them this with the hope that their sisterhood will help them. They cant have secrets, resentments. If they can do that they can avoid dying.

Abigail and Harry work with the young girl to reverse her curse. Harry teaches her how to feel and then let go. It works. The town comes alive. She thanks them for the help.

Back at home, Abigail is annoyed that Harry only comes to her when he needs help with dark magic. Then he pushes her away.

The girls talk about how they need to stay strong. Mel and Maggie tell Macy she needs to take some time to see if she wants to be one of the three. They all separate before coming back together hours later. They all want to work on being unbreakable as sisters.

Harry finds Jimmy. He knows what he has been doing, he has been taking the magic from magical creatures. Jimmy admits it is true. He wants out and he needs Harry to help him.