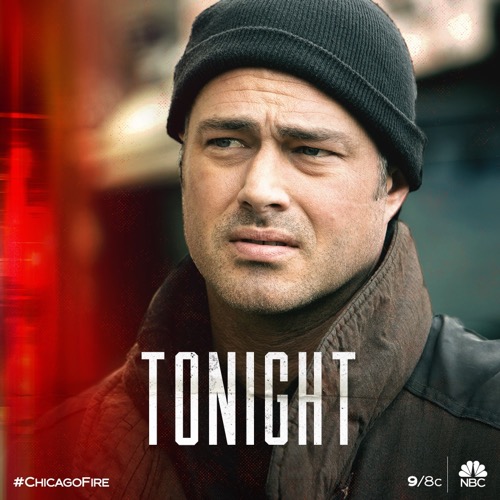 Brett’s conflicted when her birth mother gets serious about tracking her down. Severide misunderstands his role as Cruz’s best man. Mouch bites off more than he can chew.”

Tonight’s Chicago Fire season 8 episode 13 looks like it is going to be great and you won’t want to miss it.   While you’re waiting for our recap make sure to check out all our Chicago Fire recaps, news, spoilers & more, right here!

Firehouse 51 was called when someone smelled gas. They didn’t know where the gas leak was coming from and they were just explaining it to Casey when the whole building went up. A mother and daughter were trapped inside. The firefighters went in after them and they found first the mother then the daughter. The firefighters were worked together to get the job done. The new kid was injured and so that left Hermann down a guy. He had to rely on Mouch to get him through the next shift.

The new kid in the meantime went to the hospital. Blake Gallo even ran into the mother he helped saved so he asked her about the daughter and unfortunately the little girl isn’t doing so well. She was put into a coma to ease the pain of her burns. Gallo returned to the firehouse with a heavy heart and Kidd tried to make him feel better. She reminded him that the little girl would have died without him. Kidd also paid close attention to Gallo and so she could see that he was unraveling a bit.

He was paying closer attention to the truck. He was even repeating himself by doing the same safety checks and so Kidd got his mind off it. She told everyone that he earned his first wound. The rest of the team then began showing off their own wounds and they helped Gallo to laugh it all off. Gallo had realized what Kidd. He later thanked her for it and she told him it was no worries. Kidd didn’t know that the little girl was the same age his sister was when she died. Not until Casey told her and that when she realized how it was affecting Gallo.

Still, she did a good thing by telling him to reach out to his fellow fighters whenever he needed to talk. The firehouse also later received another call. This time they were called to a salon and it was suspected to be another gas leak. Everyone in the restaurant was passed out in their seats. The firefighters monitored the gas leak as they slowly cleared out the building and they did their best to make sure it was clear before they turned on the fans. They didn’t want to risk the building exploding with people still inside.

Once they were done with ensuring everyone made out, they all began questioning the nature of the gas leak. They didn’t know why it would leak into a place like a salon and at the same time they noticed the uptick of gas leaks in the area. There was one at the house that was unexplainable. The mother had thought maybe she accidentally left the gas on when she used the stove and so Gallo was the first to tell her it wasn’t her fault. He said there were problems all over the city. Not just her and so the firefighters were looking into it.

The problem turned out to be the gas company. They were pushing gas even when the valves were turned off and it was affecting a whole region. Chief Boden checked with other firehouses. They were all having the same issues and so the company needed to shut off the gas, but the women running the place didn’t want to do that. She reminded them that they couldn’t turn off the heat in the dead of winter. They in turn told her how people’s very lives were being put at risk and so they had to shut off the gas.

The gas company did what they could. There weren’t any new incidents overnight and by the next day the only the station needed to worry about was Cruz. Cruz was going out of his mind planning his wedding. His best man should have stepped in to help and instead Severide left him hanging. Severide didn’t see the big deal. He completely forgot how Cruz lost his last best friend and needed someone to be there for him. Kidd tried to remind Severide that he was all Cruz had. And Severide still failed to see it.

The house also received another call about another gas leak. This time it lead to a new explosion and so the firehouse responded. They rescued a woman that was trapped by debris. They also almost lost one of their own because Casey became trapped by the fire. He was only saved when they were able to shut down the gas and thankfully the last fire helped the gas company to pinpoint what went wrong. It was a pressure situation. They fixed it now and they gave a bottle of bourbon to the firehouse in thanks.

Severide also came to realize what he needed to do as best man. He stepped up in supporting Cruz and so Cruz finally calmed down. Another person that was glad to calm down was Mouch. Mouch worked himself up in getting ready for what he thought was a review and it turns out Herrmann got his wires crossed. So, Mouch took some extra money from Herrmann for the overtime. It got him to relax and Herrmann never knew what happened.

Casey and Brett meanwhile opened the letter from her biological mother and she finally learned what her mother’s name is.

And Gallo kept checking in on little Lucy even when he didn’t have to because he was just that guy.