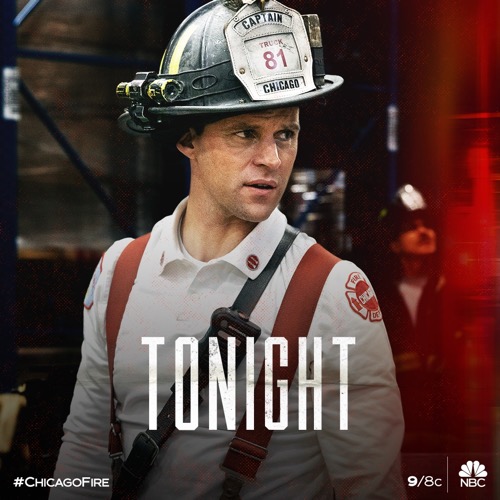 Tonight on NBC Chicago Fire returns with an all-new Wednesday, March 18, 2020, season 8 episode 17 called, “Protect A Child,” and we have your Chicago Fire recap below. On tonight’s Chicago Fire season 8 episode 17 as per the NBC synopsis, “Things get personal for Casey and Gallo in the aftermath of a suburban house fire involving a mother and her young son. Herrmann campaigns for more respect. Kidd has an idea for giving back to her community.”

Tonight’s Chicago Fire season 8 episode 17 looks like it is going to be great and you won’t want to miss it.   While you’re waiting for our recap make sure to check out all our Chicago Fire recaps, news, spoilers & more, right here!

Stella comes out of a store and notices two girls by a car, she asks them aren’t they supposed to be at school, but they walk around. Chief Wallace holds roll call, Hermann puts his hand up, he says he was wondering about officer’s quarters, it is over a year since he made lieutenant, and he thinks it is time for him. Wallace says no, the alarm goes off.

There is a house fire, Casey is there, he gives orders. A woman is on the street, she says that the mother in the house is not fit to be a mother. Inside, there is a wheelchair turned over, the team tries to make it upstairs. A woman is on the stairs, she tells them that her seven-year-old son is trapped upstairs. The fire is burning out of control, the young boy, Noah can’t be found. Moving into the kitchen, Noah is finally found hiding in one of the cupboards under the sink.

The mother, Jenny, is outside and she sees her son, he is fine. Casey praises the woman for wanting to get to her son. When the mother and son take off in an ambulance. The neighbor who said that the mother was not a fit parent, tells Mouch that she is paralyzed. He tells her that she is not helping and should go.

Back at the station, Casey goes to see Hermann, he puts up a curtain around his bunk to make his own quarters; the other guys find it amusing.

Kidd is making sandwiches when she has an idea. Meanwhile, Hermann is moving things into his quarters. Kidd goes to see the chief and tells him that she has to do more for young women out there. What if she sets up a program where she recruits young women from Chicago schools to become junior firefighters. Chief says it sounds good, but she will need patience and persistence, and approval. He tells her to call Horton, tell him that she has his full support, it’s a terrific idea.

Julie drops by to visit Sylvie, she wanted to get some insider knowledge about neighborhoods.

A woman drops by the station, she asks for Casey, she is Vera from Child & Family Services. It is regarding the house fire earlier that day. She received an endangerment complaining asking for her to remove the child from its mother. Vera sits down with Casey and Chief Wallace. Casey says the mother, Jenny, turned over her wheelchair to get out and tried to crawl up the stairs. Vera distorts everything Casey says and he asks her what her agenda is. She gets up and leaves, Wallace says he didn’t like her attitude. Casey says it doesn’t sit well with him, Vera only wants to remove the child from his disabled mother.

Hermann has his whole office set up, but it is not soundproof.

Horton is at the station to see Kidd, she thanks him for responding so quickly. She says she is calling it Girls On Fire, young women can see that there is a career for them in the fire station, make them feel empowered. He tells her to fill out a form, get a female officer to commit with her, and he will take care of it.

The alarm goes off, it’s a medical assist. On the scene, the is a naked man barricaded in a building, dancing in front of the glass doors. There are officers on the scene and Brett says they are not treating this guy until he is restrained. The officer says nobody is complaining about a crime. Foster tells the officer the man it is public indecency, a misdemeanor. The officer calls her honey, and Foster gets mad. She looks at his body cam and calls him an a-hole. The distraction causes the naked man to run out of the building, it’s a crime now. The owner, Nicholas Winter, is about to go into his building when Brett asks him if he does personal and commercial real estate, he says both, she introduces herself.

At the station, Wallace tells Casey to go speak to the neighbor who made the complaint about Jenny. Casey and Gallo go to see the neighbor, her name is Arlene. She says Jenny is unfit, she can’t take care of her yard, she has no respect for the property line. She called to get her son taken away because of some yard wired. Casey tells her she is reprehensible, Arlene goes into her house.

Julie and Sylvie meet with Nicholas Winter in his office before they leave Nicholas asks Sylvie on a date.

Casey and Gallo go to see Jennifer at the hospital, a woman walks in from child services and tells her that they are removing her child from her home.

At the station, Casey tells Chief Wallace that it was awful. Wallace sympathizes but they have a shift to run.

Kidd tells Kelly her problem with finding an officer to partner up with her for Girls on Fire, he says he knows a woman officer, Wendy Seger, she might be good.

Hermann ads some more items to his tiny workplace. Meanwhile, a card game is going on in the kitchen, Brett tells Foster about the guy how asked her out. Gallo says she should take her time, then the alarm goes off.

At a warehouse, a forklift has fallen on a man. The problem is, the more they move the forklift, a huge shelving unit that is unsteady threatens to fall over everyone who is trying to save him. The man passes out, Hermann says they should use the jaws to get him out, it works. The man is transferred by stretcher to the hospital.

Casey goes to see Vera at Child & Family Services, says he wants to talk to her about Jenny. He says he just came from a call, a warehouse worker almost died, all his friends were trying to help him and they failed. The point is, Noah wasn’t in any more danger because his mother uses a wheelchair, the neighbor is bitter because of tree roots. Vera tells him that it is a matter of family court now. He says he had a son once, his real dad dropped back in the picture, he couldn’t deny the child that love and Tiny pushed it through. And, he knows she can tear up the documents and let this go.

At the station, Hermann arrives back to find that his little working place went on fire, he plugged a hot lamp right near a shower curtain. Hermann has to report to remedial fire safety training.

Kidd meets Seger who is intrigued by her program and tells her that she is in.

Sylvie is about to leave the station when Nicholas calls her, she tells him that she is not ready to get social, she has things that she has to sort out. She sees Matt drive off and looks at him.