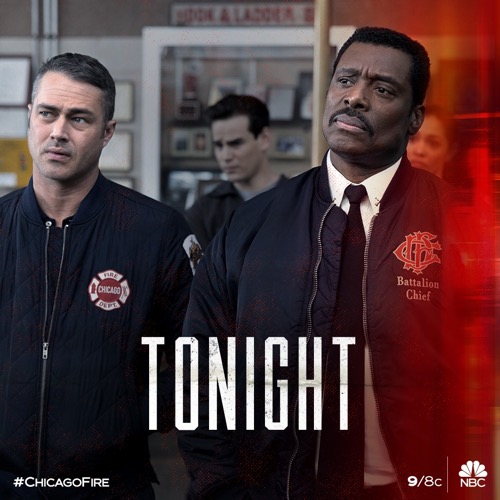 Tonight on NBC Chicago Fire returns with an all-new Wednesday, April 8, 2020, season 8 episode 19 called, “Light Things Up,” and we have your Chicago Fire recap below. On tonight’s Chicago Fire season 8 episode 19 as per the NBC synopsis, “Tension builds when a group of rabble-rousers attempts to lock down the firehouse. Brett is faced with a monumental decision. Cruz readies himself for a big day. Gallo and Ritter attempt to launch Firehouse 51 into the social media age.”

Tonight’s Chicago Fire season 8 episode 19 looks like it is going to be great and you won’t want to miss it.   While you’re waiting for our recap make sure to check out all our Chicago Fire recaps, news, spoilers & more, right here!

Chicago Fire begins tonight with Stella Kidd (Miranda Rae Mayo) drives a very hungover Kelly Severide (Taylor Kinney) into work) while Blake Gallo (Alberto Rosende) is trying to teach Tuesday some new tricks in the firehouse. Ritter (Daniel Kyri) is joking around with him as Christopher Herrmann (David Eigenberg) wonders how they all have so much energy after partying at Joe Cruz’ (Joe Minoso) bachelor party. Chief Wallace Boden (Eamonn Walker) wonders if Joe wants a floater in for him today but he needs to work to keep the wedding jitters at bay.

Matt Casey (Jesse Spencer) finds Sylvie Brett (Kara Killmer), who talked about her mother’s funeral. They are interrupted when the alarms sound, but they cannot get out as someone has chained all the door shut. They can see the crew messing with their rigs, rushing out through the back doors and find the men saying this is a formal protest of the closure of firehouse 87. Boden calls it in to redirect to call and they are told to not cut the chains by Boden and they are tired of their neighborhood being ignored. Boden tells everyone else to get inside as they cannot do anything until further notice.

Back in the conference room, they learn the call was a garage fire and everything is under control. CPD is coming down but until then no one is allowed to engage with the men on the floor. Everyone is frustrated as it is being recorded. Stella is going crazy, asking Sylvie if she wants to look through some essays with her for “Girls on Fire” with her, which she agrees. She was hoping it was Scott that called her but she has heard nothing since her biological mother died. Everyone is supportive of her, hoping Scott will respond soon.

Ritter and Gallo feel that if these protesters want to be heard maybe they should make it feel that 51 is behind them but Boden says the last thing this thing needs is more attention. Others attempt to cut through the pipes the protesters are using so when the CPD arrives they will be able to assist them; Boden agrees for them to keep at it but only help when the police arrive.

CPD arrive and it is only 2 officers who inform them of all their violations, suddenly several dozen protesters show up and charge into the firehouses, after they are threatened with arrest, causing chaos. They have their cameras rolling as Severide smashes the phone out of someone’s hand; the police promise there are several more police coming. Boden wants minimal cops and he wants as little problem as possible.

Guards and gates are set up, Herrmann shuts the doors of the firehouse as he reprimands the man chained to the firetrucks, hoping he is pleased with himself. He respects he can stand up for something but reminds him they don’t want to see a station closed either and this is not the best way to get what they want. He learns how Herrmann got things done, and it was by lighting a sofa on fire and sometimes you just got to light things up.

Stella rushes into Boden’s office and shows him the video of Severide threatening and throwing the phone of one of the protesters and to make things worse, they sent Chief Carver to deal with the situation, only telling the protestors to “shut up and listen” as closing the station was a budgeting decision made by city hall. They demand the city hall to come to them so Matt offers to call the Alderman to deal with the situation and he is given 15 minutes to do something before he brings reinforcements.

Boden finds Ritter and Gallo, agreeing they can use social media to make this better to show there are no sides, but they all want this thing to get better; they agree. Meanwhile, Randall Mouch McHolland (Christian Stolte) and Herrmann talk about how weird it is to be involved in something like this as you usually only read about it.

Emily Foster (Annie Ilonzeh) and Sylvie are reading the essays for Kidd, feeling its a good distraction for everything going on. She suggests its a good time for Sylvie to go on furlough; suddenly CPD calls for Sylvie saying there is a guy outside asking for Sylvie, saying he needs to talk to her and he isn’t part of the protest. It is Scott who says the baby is going to be released but he knows he can’t take care of her and wants Sylvie to take her.

Sylvie learns that Scott didn’t want a child and doesn’t want to do it on his own and that Julie always said she and Julie were so much alike and if she doesn’t take her he will have to give her up.

Matt needs to see Alderman Rivas and he barges into the office and tells him about what is happening in his office, confronting him about closing the office. He needs him to talk to the people immediately. He knows he is an honest person and if he doesn’t do it he will talk to reporters.

At the firehouse, Ritter and Gallo talk to the protesters to get their side, but it doesn’t go well at all. Joe is in the locker room, extremely angry. Kidd finds out from him that someone is climbing all over Otis’ memorial to get a better view. Kidd feels Otis wouldn’t want him raising hell on his account, but they both know he would. Joe cries, believing Otis would have been there with him tomorrow standing at the altar tomorrow. Stella tells him that he will be.

Matt returns and Rivas will be coming after a few phone calls. He finds Sylvie in his office crying. She reveals Scott came by and wants her to take the baby; both thinking he may be panicking. She barely knew Julie but she misses her so much. Matt hugs her as she wishes for more time and doesn’t know what to do. He promises that whatever she decides, he will be there. The alderman arrives and Stella holds her.

The alderman thanks the protesters for their passion, saying he will commission a study and will fund other programs; meanwhile the man tied to the trucks begins to shout back and collapses causing Brett and Foster to assist him. They need to get an IV in before they can remove the pipes on his arms, forcing it in through his jugular. Everyone watches in silence as they attempt to save him, Foster performing a life-saving surgery there on the ground of the firehouse with people watching and filming.

The alderman sneaks out, saying it is getting out of control as one man wants the fight to continue. Other protesters feel there has to be another way. Herrmann stands up saying to not make a bad situation worse and he gets shoved; Severide jumps in and a brawl breaks out, including Joe getting an elbow to the face and unconscious on the floor. The protesters all get arrested as Boden tells the team to get the rigs back in service.

Sylvie comes to the hospital, finding Scott with the baby. She reminds Scott that if he lets someone else raise the baby she might have a great childhood but he will always wonder “what if”. He feels she deserves better, but Sylvie says she deserves a father who will love her and will pace outside her hospital bed, worrying over her, wanting what is best for her, the kind who can teach her who her mother was. The one who can answer those questions Sylvie had her whole life, like how did she laugh, what movies did she love, what made her happy; that is what will keep Julie there with him and with that little girl. She needs Scott and he can’t let her go.

Everyone is in their suits and Boden calls Gallo over, saying he just got off the phone with HQ and city hall, wanting to know what he posted online. Joe is cleared from the hospital, he has an hour to get cleaned up and get to the church. Severide has his tuxedo and they are good to go. Emily runs into Dr. Will Halstead (Nick Gehlfuss) who learns she did the procedure out in the field and he informs her she did a great job, missing her calling.

Matt, Herrmann, Boden, Gallo, and Ritter go to see their patient Louis in the hospital, informing him that alderman Rivas is going to go everything he can to reopen the firehouse 87. It was the video that Ritter and Gallo posted that made him rethink his stance. Boden thanks them for their video.

Everyone is talking their seats in the church for Joe and Chloe Allen’s (Kristen Gutoskie) wedding; everyone looking absolutely beautiful. Joe, unfortunately, has a few stitches above his eye. He smiles in the mirror and takes his place as the bridal party walks in. He apologizes when she sees the scares but she tells him she loves him. The wedding is perfect.