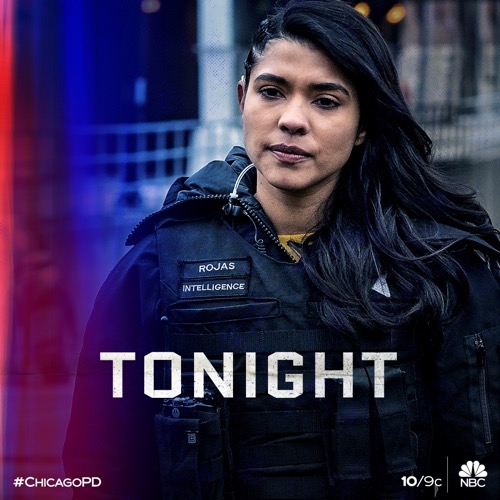 Tonight on NBC their drama Chicago PD returns with an all-new Wednesday, March 25, 2020, season 7 episode 18 called, “Lines,” and we have your Chicago PD recap below. In tonight’s Chicago PD season 7 episode 18 as per the NBC synopsis, “Intelligence does everything they can to build a case against the elusive leader of a drug ring, but things get complicated when Rojas realizes someone she cares about might be involved.”

Ruzek arrives to meet up with detective Tierney regarding a victim that is related to the Rodriguez case that Ruzek is working on. Ruzek tells Tierney that Gael Rodriguez is the head of a drug trafficking organization. Tierney is familiar with him. The victim was drenched in acid, her name was Isabel Pena. Gael Rodriguez’s girlfriend, Hanna tells Voight she will call him if she finds anything else. Voight tells her they are working on bringing him in and his number two, TJ.
Voight tells Ruzek that he wasn’t TJ, get him to flip and they get Gael off the street. Meanwhile, we see TJ, he is at a club, Atwater is there undercover trying to make a deal. Rojas is also there a guy recognizes her and uses her real name. It turns out the guy is an ex-boyfriend and harmless, but he has no idea that she is a cop.

At the station, Rojas tells Voight that TJ has agreed to sell 4 kilos as a test run. Voight wants them to grab TJ and flip him for Gael. Voight tells Halstead and Upton to take the lead on this.

They are at the stakeout to meet TJ, he doesn’t show up. Atwater calls him to find out what is up and TJ says the boss says no more new partners. Atwater asks if he has to get to know the boss, babysit his kids to make this deal happen. TJ says the deal is dead. Either way, this is not going to happen.

Back at the station, Upton tells Voight that Gael is good at what he does, maybe he felt something was up. Voight wants them to listen in on TJ, everyone he speaks to, meets with, every potential buyer, the bars he is drinking at, the corners where he smokes, every single thing he does. They set up audio and video, and every time TJ makes a move, they will eventually move up to Gael without him even knowing it.

The next day, Rojas goes to see her ex-boyfriend. He accuses her of maybe seeing someone and maybe that is why he hasn’t seen her since the club. She asks him what he was hanging out there anyway, her friends tell her nothing comes out good from there, just people running deals. He gets annoyed with her for trying to ask more questions.

At the station, the team is going over all the coming and goings of Gael and TJ is the guy to meet with everyone, Gael makes himself look clean. Halstead thinks they should go through one of the buyers that TJ uses, that might be a way of getting in.

Roja tells Upton that her ex-boyfriend was on the wire, he knows TJ, he only knows him from the neighborhood and she deleted. Upton tells her that is obstruction and she could go to jail. She says she has known him since she was eight, he has her back and wouldn’t do anything violent and she promises that he is not involved.

Atwater and Roja are on the street watching TJ.

Atwater and Halstead are excited, they think they might be able to get Gael.

Roja goes to see her ex and tells her that a co-worker knows TJ and she knows that he is involved, and whatever he is into, he needs to get out now. He tells her to go home and opens the door for her.

Voight shows up at Roja’s door and tells her that he knows where she just was, they need to talk. He tells her what she did do is a fireable offense. She has known her ex since they were in foster care. She said she didn’t tell him anything, she didn’t tip him off, she just wants him to get out of it. If her ex shows up at that buy, they are going to arrest him.

Time for the deal to go down, a blue Subaru shows up, it is Roja’s ex, Luis TJ is not there, Voight tells the team to let the buyer and seller walk, they are afraid they might tip off TJ. But, Voight tells the team to take down Luis, she is there and he is very surprised. In custody, Luis is in interrogation, and he is upset because he feels that he was lied to. Upton is interviewing him, he says he doesn’t even know Roja anymore. She tells him that she can help him now, but she doesn’t know if she can help him later. In the end, Luis gives them everything they need, he takes a deal instead of asking for a lawyer.

Luis is undercover, Atwater and Voight are watching, so are Roja and Upton. There is a problem, the cells just went down on the trackers. Voight says someone needs to get him eyes on TJ’s car now. Roja and Upton head to his car, TJ is dead in his car, they found the tracker it is on the dashboard.

Upton tells Roja that because the deal didn’t go down, Luis’s deal with the police is null and void. Roja goes to tells Luis herself. He tells her that he can’t be her person anymore, what they had is gone.

Upton takes Luis down to the basement and asks him for more information., he gives it to her and they are able to take down Gael, he parks his car on the side of the street and there are drugs in his trunk.

Voight calls Upton to his office, they arrested Gael for possession, he had two kilos in his trunk and Luis is going to get the one year deal. Voight says this is what they are doing now, planting evidence. She says it was his drugs. Voight tells her that she crossed the line, and if you cross enough of them, you won’t see where you are. He tells her that the NY FBI task force is looking for an officer, he just signed her up, it is an assignment for a few weeks and the lines are very clear. Voight is upset, he is shouting at her, she says she just did what he would have done. He tells her to have a safe trip.