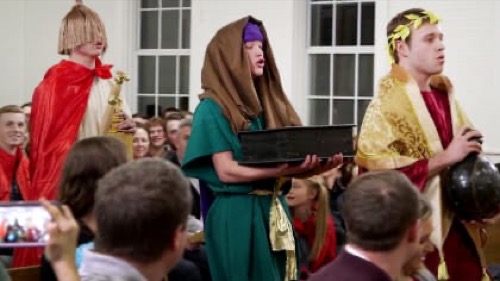 The whole family pitches in to pull it off – including Jim Bob, who has a very special role. In LA, Jinger and Jeremy cut down their first live Christmas tree together.”

The Duggar family celebrated their second annual Duggar Family Ugly Sweater Party. Since the start of this tradition, the family has slowly moved from ugly sweaters to ugly outfits and now they more or less wear ugly costumes every year. They also managed to turn it into a competition. The Duggar family is very competitive. They loved the family game night and they usually turn everyday things into a competition just to extend that excitement. The competition tonight was broken down into several parts. There was most creative and the grand prize went to the ugliest. Justin won the Ugly Sweater contest tonight. He looked a riot in his outfit and people couldn’t help loving it.

Tonight was also the start of a new tradition. The Duggar children wanted to put on a Christmas pageant and they left everything to two days before they wanted to put on the show. The kids are mostly adults now. They have their own children and so it was the grandchildren that were playing the important scenes. There were three babies born in the past year. They were all contenders for baby Jesus and whoever was the happiest right before the show got to play the Son of Christ on the day of. The new babies this year also inspired the Duggar sisters to take photos of the grandkids for Christmas.

They were trying to get everyone, but it was a bit hard when the grandkids are so small. Children that age tends not to stand still long enough for a photo and so there was a lot of bribery. Jessa was the one taking the photos. She bribed her own kids and she was there as her sisters and sister-in-laws had to bribe theirs. The easiest to photograph were the babies. The babies were put down on white blankets to make it easier on Jessa to photoshop it later and the toddlers and kids all stood next to white walls or white blankets as backgrounds. And for family members that weren’t nearby, they had to send their photos to Jessa.

Jinger and Jeremy moved recently. They live in LA now and so they were trying to start their new traditions there. They later bought their first real Christmas tree. They usually buy fake trees and so this was the year tonight was the first time they were ever going to have a real tree. They also hadn’t just bought it either. They went to a farm and they wanted to cut the tree down themselves. It was again hard to do with a little one around. Their daughter Felicity was mobile now and she was running around the farm. She would often find puddles for some reason. She seems to really like those and so it was a hassle to stop her from going in.

Back home, the pageant was underway. They chose Jeremiah to be the narrator because he was the loudest and the only other adult in the play was Jim Bob who was playing the donkey. He used to be able to carry his kids on his back all the time and so he thought playing the donkey would be easy. Only it wasn’t. He was getting up there in age and bending down for that long as well as carrying someone had been heavy on his back. He had actually needed knee pads going forward. Jim Bob was a good sport about it and so again the hardships with practicing the pageant were the kids themselves.

Spurgeon was supposed to play the Angel Gabriel. Then he saw that the kids that were playing the animals were eating snacks and so he asked to play an animal so that he could eat snacks as well. There were a few other issues with the kids. They were the reshuffling of parts in the pageant and there was the wandering. The sheep were played by toddlers who did not want to a standstill. The parents eventually figured out the best way to keep them still for the play was to put snacks on the stage. This ended up working because on the day of the play the sheep seemed to be feeding on the feeder and it kept them still.

There were also mishaps on during the pageant itself. The child playing Mary had accidentally stepped on Jim Bob’s costume and he was kind of stuck with trying to move, but again he found the humor in it. He liked being able to make people laugh and he did that by playing the donkey. Jim Bob was great. The children were great. The pageant was a big hit. Everyone enjoyed it and they ended up using several babies to play Baby Jesus. So, this way everyone got to have a part in the play. And then at the very end, the Duggar children brought forth the collage they made of all the grandkids.

It was two giant pictures with all the kids standing together (thanks to photoshop) and it was a great surprise for Jim Bob and Michelle. They loved their Christmas gift. They couldn’t wait to hang up and it wasn’t long after that, that they heard a new grandchild is coming. Abbie went in labor a week before her due date.