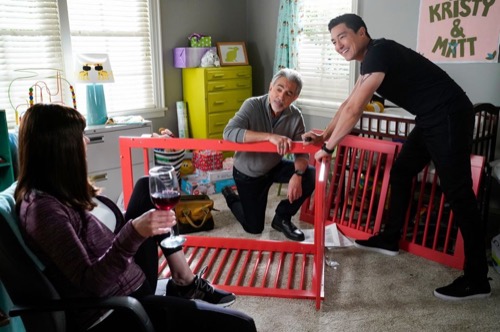 Tonight on CBS their hit drama Criminal Minds returns with an all-new Wednesday, January 22, 2020, season 15  episode 4, called “Saturday,” and we have your weekly Criminal Minds recap below. In tonight’s Criminal Minds episode season 15 episode 4 as per the CBS synopsis, “The members of the BAU enjoy a Saturday off in vastly different ways.

While Rossi and Prentiss help Simmons assemble a new crib, Garcia leads a hacking competition, and Dr. Reid strikes up a conversation with a woman named Maxine.”

Elizabeth Wise attended a seminar at the bureau. It was a hacker seminar set up by Penelope Garcia and it was a fun exercise. Garcia is a friendly person. She can make anything fun and she put Elizabeth at ease. Elizabeth felt so safe with her that she admitted she needed help. Elizabeth has a stalker and she doesn’t know what to do about him. He’s been getting aggressive. He first started sending her messages on social media and then he began sending photos of herself. It seems the stalker has been filming her on her daily routine.

Elizabeth thought this stalker was going to hurt her. She turned towards Garcia because Garcia worked for the FBI and she thought she could help. Garcia was luckily someone that can help. She reached out to her friends and she had a couple of them come in where she then promptly told them about the problem. The team’s first thoughts about the case had been that it was merely an ex-boyfriend. They thought this ex resented Elizabeth moving on and had wanted to hurt her. They even found one of her exes.

The team went to Elizabeth’s apartment where they searched the place for any signs of a hacker. They thought the hacker had piggybacked one of her smart devices and was using that to spy on her, but it turns out the stalker had entered her apartment. He created a space for himself underneath her bed. The Unsub cut a coffin-like whole into her floor and there were tissues down there as well. The team didn’t even want to think about what the Unsub was doing while he was there.

They figured the Unsub liked being close to Elizabeth. The Unsub must have met her and its possible she rejected him. It didn’t have to be something big. She could have walked past him and he considered that rejection. Only Elizabeth couldn’t help them pinpoint her stalker. She hasn’t spoken to anyone in months because she’s been so afraid and she also hid out in her apartment. She thought that was the one place he couldn’t get to her and it turns out she was wrong. Her stalker had been pushing her because he likes it when she stays home.

The Unsub has been slowly cutting Elizabeth off from her everyday life. He wanted her to be scared and alone and his messages only took a turn for the worse after she broke up with her boyfriend. The Unsub had recorded Elizabeth with Billy. He was apparently listening in on their sex life and when that was denied to him as well – he snapped. This Unsub was the lowest of the low. Garcia wanted to catch him and she confessed to Alvez that she wanted this Unsub put away because he reminded her so much of guys she met on the dark web.

Garcia received countless death threats online. She’s told from various how they couldn’t wait to kill her and there was nothing she could do about it because the main person was based in Russia. So, Garcia wanted someone to have justice. She looked into this stalker and she played back all the recordings the stalker had taken of the couple and she noticed something. She noticed Billy’s voice was louder and that’s because the microphone was on his side of the bed. The Unsub would only have done that if Billy was actually his target.

The Unsub was stalking Billy. He lashed out Elizabeth because he didn’t want them together and yet he liked listening in on their sex life because it was the closest he ever came to having Billy for him. Homophobia was rampant online. The Unsub has been trying to deny his feelings for Billy by going after Elizabeth and he targeted her apartment because she lived on the first floor while Billy lived on the fourth floor. And so the team asked Billy about anyone interested, and he remembered a guy that used to live in Elizabeth’s building.

The team later found their Unsub thanks to the tip Billy gave them. The guy had even claimed that he loved Billy and so he can explain his reasoning to the judge when he sees him.

And later, Matt Simmons and his wife had their newest baby. Her name is Rose Mary because that’s the closest they could get to Rossi and because Rossi helped them solve their financial situation.

And Reid ended up meeting someone who seems pretty special.