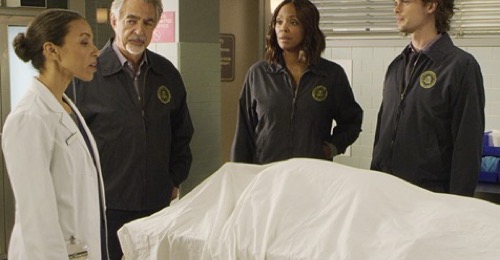 Tonight on CBS their hit drama Criminal Minds returns with an all-new Thursday, January 29, 2020, season 15  episode 5, called “Ghost,” and we have your weekly Criminal Minds recap below. In tonight’s Criminal Minds episode season 15 episode 5 as per the CBS synopsis, “Following a series of fatal shootings, the BAU team travels to Des Plaines, Illinois, to investigate what appears to be a copycat serial killer. Their efforts are thrown off track when members of the BAU are targeted.”

There was a double homicide Des Planes, Illinois. The two men were sadly gun down as they were playing basketball and this followed on the heels of another victim being shot outside the supermarket. In both cases, the Unsub was an LDSK. A Long Distance Serial Killer. The Unsub was most likely using a sniper rifle to target his victims and he also seemed to be following the path of another serial killer. This other serial killer was Phillip Dowd. Dowd started out killing one person before on two then three and he was eventually stopped by the team. He was killed and so this couldn’t have been him.

It must be a copycat. This copycat initially repeated Dowd’s actions to the very last detail and then he started to change his MO. He began to merge Dowd’s cases. Dowd was a doctor at an emergency room and he would shoot his victims before hurrying back to work where he then works on said victims as well. Dowd had wanted to be involved in every part of the process. His last victim was a member of the police force and so the team wanted to stop this copycat from making it that far. They just didn’t know how to go about it.

Their first thoughts on the case had been wrong. A postmortem showed the victims hadn’t been killed by a sniper rifle. They were killed by a handgun that was notoriously short-range and there was also evidence proving that there was more than one shooter. The Unsubs, in this case, we’re working together to recreate Dowd’s reign of terror, but the team wanted to stop them before they got to target a member of the police department. Dowd’s last victim was a cop. The local police were told about the risks in this case and they chose to still work it.

Everyone wanted to catch the Unsubs. The team and the local police were given an anonymous tip about a car on a deserted path. Both teams thought it was important. The FBI was on the road to this supposed car when out of nowhere they were attacked and two of their own was kidnapped. Simmons and Alvez were both taken. This was a dramatic escalation and it didn’t make sense to the team. They had no idea why the Unsubs would change their MO. That is they didn’t until they realize they were the real targets all along.

The Unsubs purposely recreated one of their old cases. They then increased their timeline to get the BAU to come out to them and then they split them up. The Unsubs had wanted Alvez and Simmons alone, but Lewis had been with them and so the Unsubs took the boys and they left behind a disoriented Lewis. She was able to retrace her memories and she confirmed to her team that the Unsubs had wanted the boys all along. The question was why? Why Simmons and Alvez? They’ve never worked a case with just the two of them before and so Garica went digging.

Garcia went looking into their pasts. She eventually found a connection with Louis Chaycon. He was a hitman with the Chicago Mob and he would hide out in Europe after every kill. Simmons had gone looking for him with the IRT. They soon forced him into returning to the states and that’s when Alvez found him with the Fugitive Task Force. He was hiding with brother Bobby. Alvez arrested both men and they both went to jail. It was when they got to jail that they faced the real problem. The mob thought they would talk and so they made an example out of the brothers.

Louis was beaten really badly. His brother, however, was beaten to death and that’s why Louis is out here wanting revenge. Louis blames the men that hunted him down. He thinks that without them his brother would still be alive. Except there were a few things they knew that he didn’t. Simmons told Louis that Bobby had reached out to him. He said Bobby had wanted to get out of jail and that he reached out to him because he was willing to testify against his brother’s friends. And so Simmons had offered Bobby a deal.

Bobby was going to take it. Before he could, his brother’s friends found out what was happening and they killed him. Louis even had his friends with him now. Simmons saw the guy who was running things with Louis behind bars and he informed Louis that his best friend was the one that killed his brother. The biker named Fleabag had denied. He told Louis that Simmons was lying and yet Louis believed Simmons. He killed Fleabag. He was also going to kill Simmons and so telling the truth hadn’t changed the boys’ fates.

Louis wanted to punish both of them. He already put the wheels in motion and so the boys took action. They broke out of their restraints and they were fighting back when thankfully the rest of their team arrived to help.

The BAU killed Louis and they took care of his crew.