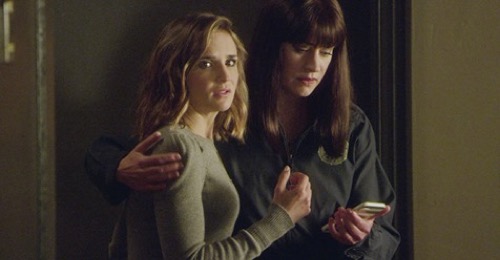 Reid canceled his date because of an urgent case. The team was sent photos of an Unsub with two victims and this Unsub demanded that they release Catherine Adams in 24 hours or she was going to kill her captives. The team couldn’t let that happen. They wanted to save those people and they had to do it without freeing a serial killer. Cat most likely arranged everything from behind bars. She’s done it before and so this time Reid had her brought to him. He wanted to question her about her latest partner.

This Unsub must mean something to Cat if she was doing Cat’s bidding. Reid wanted to know her name and how he could find the father and daughter that were kidnapped. He pushed Cat for answers, but she claimed she had nothing to do with the kidnappings. She said she had her lawyer put in a guilty plea and that she even requested the death penalty. Cat wanted Reid to believe she was a new person. She thought if she claimed it long enough that she could get something out of it and Reid put a stop to that.

Cat asked him out on a date. She wanted to spend quality time with him and Reid said that would never happen. Especially not after she sexually assaulted him in Mexico. Cat took exception to that because she said he hadn’t been able to get it up with all the drugs she put in him and so she wanted him to stop calling it rape. Cat also demanded that date. She made it known that the captives were going to die if she didn’t get that date and so the team had to work around her. They knew that Cat always has a present agenda and a hidden one. And so they tried to find what she was hiding.

They investigated the Unsub that was helping her. They figured the two must have met in prison because that was the only place Cat could have made a friend and it turns out they weren’t wrong. The Unsub was identified as Juliette Weaver. She was released from prison six weeks ago and she’s been off the grid for a week. Juliette had been in prison for possession. She took the rap for her then-boyfriend and once she got to prison she imprinted on Cat. She was known for following the serial killer around.

A further search also showed that both Juliette and Cat have similar backgrounds. They each had a father that killed their mother and fled. They also weren’t known for hurting children which meant this case was unique. The father and daughter weren’t the types Cat would have gone for. She would normally kill men that reminded her of her father and she would never touch a child. This was something new. The team was trying to put together why her MO changed when they were bombarded with a bunch of calls.

The calls were coming from one street. It turns out Juliette had put up fliers of her male victim and a woman named Susan. She made it appear this man had killed Susan and so the team looked into her. They found out Susan was Susan Adams. She was Cat’s mother and so the victims were Cat’s family. Cat found out her father had started a new family with a new daughter and she decided to punish them both. Only nothing is ever that simple with Cat. The team knew there was going on and as they tried to figure that out they were also trying to answer several other questions.

Like how did Cat find her father? She could only have found him through DNA testing and she wouldn’t want it known. She had to do it through her lawyer. The team found her lawyer and they confirmed that he delivered Cat’s DNA to a testing company. He didn’t think he was doing anything wrong. He told them how Cat found her father and so the team tried giving Cat what she wanted. She went on her date with Reid. They went skating and Reid tried to get into her head. He asked her about the baby.

Cat clammed up when he did so. She refused to talk and she wanted to go back to her cell. She was being irrational. So, Reid told her about his girlfriend. He said he hadn’t kissed her yet and that he just showed her his apartment. Cat demanded the same treatment. She took her obsession with Reid to be love and so she wanted to see Reid’s apartment as well. The team decided to pander to her. They took her to Reid’s apartment and he decided to kiss her so that he could catch wrong-footed, but they did so right in front of Reid’s new girlfriend Max.

Max was the target all along for Cat. The team found her male victim and he wasn’t Cat’s father. He was Max’s father. Max’s father Don Brenner and her sister Eloise were kidnapped because Cat was jealous of Reid’s new relationship. Even the DNA test had been a fake. Cat found her real father and he’s been dead for a while. Cat only threw that in to get the team chasing their own tail. She’s been manipulating them from the start and she was doing all of this because she wanted to drive a wedge between Reid and his girlfriend.

Cat told Max all about how Reid threw her against a wall. She claims she miscarried the next day and that Reid was a violent sociopath. Cat did her best to ruin whatever relationship he could have had with Max. She also got Max to reveal her deepest darkest secret. She got Max to tell her how she murdered her ex-boyfriend and it was only after she made sure there was no hope for a relationship between Reid and Max that Cat gave up Max’s sister. And so Cat’s last act before she handed herself in was to destroy Reid’s life.

But her plan didn’t work. The team had figured out what she was doing and so they decided to keep Reid in the dark as they manipulated Cat. They even got to Max first. Max was acting the whole time she was at the apartment. She had never shot anyone and Cat had lied about miscarriage. That happened months after Reid attacked her and so Max told Cat what she wanted to hear because she knew that was the only way to get her sister back, which she eventually did.

Max got her family back and she later introduced them to Reid who wasn’t her boyfriend, but they were developing something.