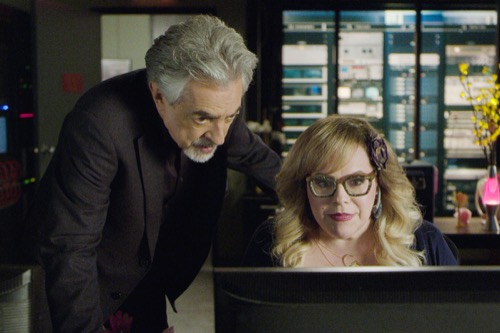 Tonight on CBS their hit drama Criminal Minds returns with an all-new Thursday, February 19, 2020, season 15  episode 9, called “Face Off,” and we have your weekly Criminal Minds recap below. In tonight’s Criminal Minds episode season 15 episode 9 as per the CBS synopsis, “It has been a year since Rossi nearly died at the hands of Everett Lynch, a.k.a. “The Chameleon.”

He has developed some new theories, with inspiration from his former partner, Jason Gideon. The BAU team sets out on an epic hunt to capture Lynch.”

Everett Lynch remains at large. He was known as the Chameleon for his ability to change his appearance, his mannerisms, and even his name at will. He became someone else as he targeted his victims. He sought out vulnerable middle-aged women. Everett prefers them to be single mothers because they were often proxies for his anger against his own mother. His mother Roberta Lynch was a con artist. She used her son to fleece men of their life savings and so Everett grew up with no respect for the law or for women.

Everett couldn’t bring himself to care for them. It was why he killed his daughter once she served her purpose and so he remains the most wanted criminal in FBI history. Special Agent Rossi was hunting him. He took Everett’s case personally because the serial killer had the chance to kill him and he didn’t take it. He allowed Rossie to live. Rossi didn’t know why that it is and so Rossi was hunting him in part because he needed answers. He wanted to know why Everett let him live. He also wanted to stop Everett from hurting anyone else.

Everett lived for the hunt. He’d find a woman he could pretend was his mother and he lured her to her death. He did that recently with one victim. He went after a rich woman and he peeled her face when he was done with her. Everett also had another woman already lined up. He was attached to a woman named Marilyn and Marilyn just left her husband. She was also traveling with her teenage daughter Olivia. The two of them needed a place to stay and so Marilyn reached out to Everett. And he offered to put her up.

All of this was happening as Rossi remained unaware. Rossi went over the case with an imaginary figure standing in for his late friend Jason Gideon and it was like the old days. It used to be Rossi and Gideon working together at the BAU. It was back when they didn’t have enough funding. It was just the two of them and they used to bounce ideas off each other. Rossi came to a conclusion thanks to this partnership that was no longer there. Rossi realized that Roberta Lynch lied to him and that Everett’s father wasn’t dead.

Everett snapped when he killed his only child. It made him question the relationship with his own father and so that in turn made Rossi question Roberta. Roberta implied that Everett’s father died in an accident. She was also coming up for parole and so the team had reason to believe she was hiding the truth because she wanted to find her son first. Roberta wanted to punish Everett for killing Grace. She probably had a plan to kill him and so the team had to stop her vigilante justice before she put it in motion.

The team sent JJ and Lewis to talk to Roberta. They tried to get answers from her and she gave them nothing. Roberta was set on killing her son herself. She wasn’t going to help the team find her ex and so they had tried to find this man before Everett. There was no telling what Everett would do if he found his father. He could kill him or he could reach out to him hoping to fill that empty void he carried around. Everett was unpredictable and so the team went about finding him. They found someone Everett would have contacted for help.

Everett had used the alias, Edward Myles. The team connected it with an intermediary who was helping track his father and the team also connected Edward Myles with a missing mother and daughter. The team was more concerned about the family than they were about Everett’s father. They knew Everett would kill Marilyn soon and so they wanted to find her. The team was looking for Marilyn and Olivia as Roberta made her move. It seems she always knew where Everett’s father was. His name is Delvin Weaver and he had been abusive.

Roberta recalled what he did to Everett when she went to go see him. She remembered that he tried to drown their son and that he was shouting while he did it that Everett should never have been born. Roberta thinks Everett is like he is now because he took after his father. She murdered Delvin. His body was later found by the team and they noticed that it had been overkill. Delvin was shot fourteen times and he was stabbed over forty. Roberta killed Delvin because she wanted to deny Everett what he wanted.

Roberta went looking for him next. She was on the warpath and the team was figuring out how to find her when Everett reached out. Everett contacted Rossi. He had wanted confirmation that his father was done and afterward he went looking for a surrogate father. Someone like Rossi. Rossi was the only one that could tell Everett he wasn’t all bad and that’s what he wanted. Everett wanted to feel like he wasn’t his father. His conversation with Rossi was alone and he revealed that he heard his father’s voice when he killed his own child.

Everett put Rossi in a position where he couldn’t arrest him or he risked Olivia dying. He played the BAU and he disappeared before the team could catch him. Everett went back to his stolen house and he played the paternal figure with Olivia. He assisted with her insulin. She was diabetic and she needed it or else she was going to die. She didn’t know that Everett tampered with it. She didn’t know what type of man he was until his mother showed up. Roberta had found Everett and the first thing she said was that he had to tell Olivia the truth.

Olivia thought her mother left her there alone with Everett because she was a flake. She didn’t know the truth and so Roberta wanted to give her that. Roberta made Everett be honest. He revealed to Olivia that he killed her mother and he showed the face he peeled off of Grace. Everett has kept this souvenir of his daughter. He tried to explain his actions to Roberta and she wasn’t buying it. She made him release Olivia. And once the young girl was safe, Roberta enacted her plan and she blew up the building.

Her plan was never just to kill her son. It was to die with her son and she did that. She also killed several members of FBI SWAT. It was such a devastating loss that Prentiss missed out on a job offer and only barely remained the leader of the BAU. The team also had to deal with the fallout of the explosion. Reid went over it because he felt like he was missing something and so he didn’t realize until much later on that it wasn’t Roberta that blew the building. It had been Everett and that means Everett is still alive.