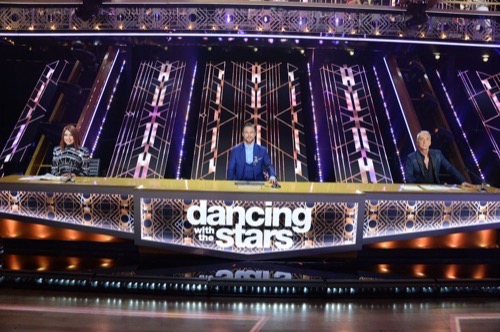 Tonight on ABC the glitz and the glimmer returns to the ballroom as Dancing With The Stars 2020 season 29 episode 7 of DWTS airs! We have your all-new Monday, October 26, 2020, season 29 Episode 7 Dancing With The Stars recap below! On tonight’s DWTS Season 29 episode 7 “Villains Night,” as per the ABC synopsis, “Just in time for Halloween, 10 celebrity and pro-dancer couples find their inner villain as they compete for this season’s seventh week.”

Emmy Award-winning host of “The Real” and sideline correspondent on “Holey Moley,” Jeannie Mai, and pro Brandon Armstrong dancing the Paso Doble to “Maneater” by Nelly Furtado, dressed in a costume inspired by Hannibal Lecter.

Judges Comments: Derek: “You are a man-eater and you absolutely ate up that Paso Doble. You had a proper frame, the oval shape, I loved it. That was a great Paso, well done.” Bruno: “You little cannibal, you made a meal out of that. I liked it, I loved it. You had such gusto and such intention, you were irresistible to watch. Work on extending the lines through your hands.” Carrie Ann: “That was an explosion, way to start the show. That was awesome, that was incredible, great attack and powerful. I want you to add in the grace.” Judges Scores: Carrie Ann: 8, Derek: 9, Bruno: 8 = 25

Judges Comments: Bruno: “Johnny, I am bitterly disappointed because it wasn’t bad at all, it was very, very good. The prince of darkness reawakens and rules the dancefloor. You have a wonderful sweeping motion and it captured the gothic romance feel. You balanced it complete well, fantastic job.” Carrie Ann: “I agree, you floated through that like a dream, you are a Rockstar. There was more interpretation of the music, more than I have ever seen. It was beautiful, well done.” Derek: “My favorite part of the show is redemption if you have a bad week and come down and do what you did. I love that song, the routine, the dancing, it was great. Fantastic.” Judges Scores: Carrie Ann: 9, Derek: 9, Bruno: 9 = 27

Actress Chrishell Stause (“Selling Sunset”) and pro Gleb Savchenko dancing the Paso Doble to “In the Air Tonight” by VonLichten, dressed in a costume inspired by Maleficent

Judges Comments: Carrie Ann: “You are in your element, talk about storytelling at it’s finest, that is what this night is all about. It was simple, the strategy was good, executed beautifully, powerful, dynamic, amazing.” Derek: “That was cinematic, I think that you tapping into that villain, with the magic, and the simplicity worked. Overall, everybody is crushing tonight.” Bruno: “Maleficent I love it when you are bad, the badder the better. That really was mesmerizing, your intention, your purpose was spot on. The only thing, you lost fluidity sometimes. Overall, it was a very strong performance.” Judges Scores: Carrie Ann: 9, Derek: 9, Bruno: 8 = 26/30

Judges Comments: Derek: “That opening leg, the musicality, I love the transitions to the lifts. I really felt that seductive energy at the beginning. I think that tonight, more than ever, it is about the character. When you got to that side by side moment, I lost a little bit of the character, but overall, it was a really strong performance.” Bruno: “I got a mild chill from it, great leg extensions and lift. The thing with jazz is that it always has to come from the body, its not just in your eyes. You have to express that, you can do it.” Carrie Ann: “I agree with Bruno, I disagree with Derek. What was lacking is the intention behind the movement. Tonight wasn’t your best dance, but you are improving and this is a process.” Judges Scores: Carrie Ann: 7, Derek: 8, Bruno: 7 = 22/30

Judges Comments: Carrie Ann: “Wow, I am truly impressed, that was a truly difficult routine and every movement was great. There was a power of dramatic twists. Work a little more on your posture.” Derek: “I love the intro when you dressed up like Norman Bates’ mother, well done. I loved the footwork, really intricate. Great job.” Bruno: “I loved the fact that you translated the character into the steps, hard to do, you did it. Just sort out your frame.” Judges Scores: Carrie Ann: 9, Derek: 8, Bruno: 9 = 26/30

GRAMMY -winning rapper Nelly and pro Daniella Karagach dancing the Argentine Tango to “Can’t Feel My Face” by The Weeknd, dressed in a costume inspired by Freddy Krueger

Judges Comments: Carrie Ann: “What is going on? That was by far your best dance, what you did with your shoulders, they were loose. Everything you did was so dramatic and there was a sense of urgency to your moves. The dynamics, the push, the pull, the footwork.” Derek: “That was definitely not a nightmare on that dancefloor man. You were such a great partner, I loved that MJ move in the beginning. Well done.” Bruno: “Nelly, you look awful. One thing is for sure, you killed that Argentine Tango. The way you held yourself, I’m telling you, well done.” Judges Scores: Carrie Ann: 9, Derek: 9, Bruno: 9 = 27/30

Actress Justina Machado (“One Day at a Time”) and pro Sasha Farber dancing Tango to “Take Me to Church” by MILCK, dressed in a costume inspired by Carrie.

Judges Comments: Derek: “You literally set this place on fire, that was awesome. I loved it, your frame was exquisite, you traveled around that floor, well done.” Bruno: “You have the power, you stormed through it as a woman possessed. Be very careful, don’t be steppy or hoppy in the Tango, otherwise you are so powerful.” Carrie Ann: “I agree with what Bruno said because you to me are one of the best dancers here and you have a shot at winning this. You used the space when you come out, you own it.” Judges Scores: Carrie Ann: 9, Derek: 9, Bruno: 8 = 26/30

Judges Comments: Bruno: “It is hard to be perfect and it was. I love this piece, and you lived up to the expectation.” Carrie Ann: “I have to agree, you meet and exceeded expectations. Wonderful job.” Derek: “From beginning to end, the opening moment with Jenna, gorgeous. Just beautiful.” Judges Scores: Carrie Ann: 10, Derek: 10, Bruno: 10 = 30/30

Disney Channel actress Skai Jackson and pro Alan Bersten dancing the Argentine Tango to “Everything I Wanted” by Billie Eilish, dressed in a costume inspired by Bride of Chucky.

Judges Comments: Carrie Ann: “I am so proud of you, you have had the roughest road this season and came back stronger than ever. You did a great job, the power you exuded was mesmerizing.” Derek: “Last week I felt for you, this week I feel you. You are on a mission, you are focused and killed that routine.” Bruno: “There was not a bad step in that Tango, it was fabulous tonight. The way you extended the shapes, the best placement that you’ve had. Well done.” Judges Scores: Carrie Ann: 9, Derek: 9, Bruno: 9 = 27/30

Kaitlyn Bristowe (“The Bachelor,” “The Bachelorette”) and pro Artem Chigvintsev dancing Paso Doble to “Disturbia” by Rihanna, dressed in a costume inspired by Cruella de Vil.

Judges Comments: Derek: “You are always so reliable, you dance your butt off with so much content, I have to thank you for that. Great way to end the show.” Bruno: “I loved it and you had the right intentions, but it felt slightly rushed and timing was not as crisp as a Paso Doble should be.” Carrie Ann: “You are a good dancer, I saw you dancing very hard. You are not resisting enough, you don’t hold your shapes strong and it looked like there were moments where you gave up. I believe you are a fantastic dancer, but this was not a great dance for you.” Judges Scores: Carrie Ann: 7, Derek: 9, Bruno: 8 = 24/30

TIME TO SEE WHO IS GOING HOME!

Jeannie Mai and Brandon Armstrong, Monica Aldama, and Val Chmerkovskiy are in the bottom two.

Bruno decides to save Jeannie and Brandon,

Derek decides to save Monica and Val. The vote is split.

Carrie Ann gets to make the final decision, she chooses to save Jeannie and Brandon

Monica and Val are eliminated.