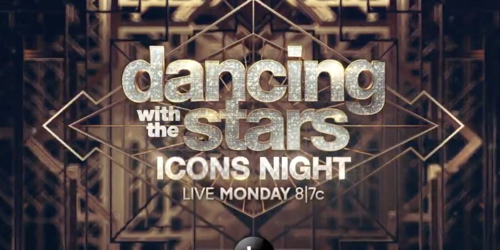 Tonight on ABC the glitz and the glimmer returns to the ballroom as Dancing With The Stars 2020 season 29 episode 9 of DWTS airs! We have your all-new Monday, November 9, 2020, season 29 Episode 9 Dancing With The Stars recap below! On tonight’s DWTS Season 29 Episode 9 “Icons Night,” as per the ABC synopsis, “Honoring their favorite musical icons, seven celebrity and pro-dancer couples will dance to the famous artists’ songs and face elimination as they compete for this season’s ninth week.”

Paying tribute to Madonna, actress Justina Machado (“One Day at a Time”) and pro Sasha Farber dancing the Rumba to “Crazy for You” by Madonna.

Judges Comments: Derek: “Beautiful Rumba, beautiful turns, there was quality in the movements. For me, the Rumba, is a slow dance but I also like to see it sharp and strong in places. I don’t want to sit back in my seat, I want to lean forward. Think about that in the slower dances. Well done.” Bruno: “I never thought you could be so nice, the gentle side of Madonna tonight, nothing shocking, nothing controversial, everything as it should be. The content was there, Derek is right, you have to engage your hips and extend the lines. You have to push it further next week.” Carrie Ann: “You look amazing tonight, I can tell you are feeling good. Rumba is difficult because it is slower. I want to see more outside the shape but you are a dynamic performer, never forget that.” Judges Scores: Carrie Ann: 8, Derek: 8, Bruno: 8 = 24/30

Judges Comments: Bruno: “Nelly’s style makes me smile, he was cool, confident. You dance for the public, don’t keep it in your mind. You missed a couple of steps.” Carrie Ann: “Great job, that was you on the track and that is what made this so much fun, it looked like you were entertaining us and that is the beauty of this kind of dancing. We don’t want you to become a professional dancer, we want you to come through your own personal journey. I like watching your journey more and more each week you open up to make us dance and laugh and smile. You did miss a few steps but really good fun.” Derek: “I loved all the elements. You hit us with a backflip, then you had some salsa in there, you had some Charleston footwork in there, you hit is with the whoa. There were so many things going on and it was so much fun. A few little mistakes here and there but still fun, I appreciate it.” Judges Scores: Carrie Ann: 8, Derek: 8, Bruno: 8 = 24/30

Judges Comments: Carrie Ann: “That was a tough one, you started off strong and I thought this was good and then, you lost the turns and the grip and the choreography. I do think you are opening your chest more and broadening your space, I like that. Well done.” Derek: “My heart breaks for you because I know you probably nailed that 100 out of 100 times, sometimes it happens, all good brother. I think we will see you again.” Bruno: “That first part was so Freddy, you were so pumped up. Make sure to soften your arms when they are extended or they look like an airplane wing. But I know you will be back and do better.” Judges Scores: Carrie Ann: 7, Derek: 8, Bruno: 8 = 23/30

Judges Comments: Derek: “The way I judge is technique, content, creativity, execution, and impact. And for me, you always lacked a little impact, until tonight. That was so beautiful, exquisite lines, choreography well done.” Bruno: “Hit me Kaitlyn one more time, we are in business. The luscious shapes, those lines stressed to infinity. Some of the images were like precious paintings you could only see in museums. A star performance.” Carrie Ann: “I know it has been a rough couple of weeks (she gets up and claps), we push you because we want you to reach your ultimate. Tonight, every line was amazing, every lift, when you landed it was perfect. Everything that we have wanted from you was in this routine.” Judges Scores: Carrie Ann: 10, Derek: 10, Bruno: 10 = 30/30

Judges Comments: Bruno: “Amy would have loved that. Unique, ground-breaking, I’ll do what I want and you did very well. The Quickstep was excellent, you didn’t skip on anything, beautiful, well done.” Carrie Ann: “We have never seen a Quickstep like that and after twenty-nine seasons, it is hard to do something that we have never seen before and you pulled it off beautifully. You are such a great performer, you believe in what you are doing. Every single creative choice you deliver with such passion and power and precision. You used the whole floor like it was an ice skating rink, beautiful.” Derek: “You being you equal love. The technique, the footwork, so clean and I love the beehive hairdo.” Judges Scores: Carrie Ann: 10, Derek: 10, Bruno: 10 = 30/30

Judges Comments: Carrie Ann: “I am so proud of you for giving us this fierce Paso Doble. There is something that just happened, when Janet came out with this album they channeled a new fierceness and took it to another level, that is what happened tonight. Amazing.” Derek: “You are young, strong, and confident. Starting on your own like that, it was bold. Watch your arms, you don’t want to have tension in that. Overall that was a great routine.” Bruno: “Respect my darling. This is one of the most grown-up dances we have, you lived up to it. Purpose, strength, beauty, power, you did a fantastic job.” Judges Scores: Carrie Ann: 9, Derek: 9, Bruno: 9 = 27/30

Judges Comments: Derek: “I have seen growth throughout this experience and it has been a pleasure. I have seen you dance, perform, and put a smile on my face every single time. That had so much content in it, so much charisma. I would have liked a little more pump-action and drive, a little stronger, but dude I love you, great job.” Bruno: “Rocket Man, It was so entertaining, Elton on Broadway. I love the structure, the theatricality of it, and the characterization was delicious. You are an entertainer, you bring characters to life. Next week, semi-finals, kicks and flicks, retraction. As a theatrical number, fantastic.” Carrie Ann: “You are such a pleasure to watch and I love that you are at the level now where you can stylize your routine. Your feet, just a little bit, they were floppy.” Judges Scores: Carrie Ann: 9, Derek: 9, Bruno: 9 = 27/30

Tyra announces that because Nev Schulman and Jenna Johnson finished last week’s competition tied at the top of the leader board and they had the highest cumulative scores across the season as of last week, they have won immunity from tonight’s dance-off. And on top of that, they get two bonus points, but they are not immune to tonight’s bottom two.

Justina and Sasha vs. Kaitlyn and Artem: performing the cha-cha to “Telephone” by Lady Gaga feat. Beyoncé.

Judges Comments: Derek: “I love this so much, it is like a proper Latin ballroom competition and it is more important when there are more people on the dancefloor to stand out.” Bruno: “I felt plenty of Latin fire and passion, precision, elegance, and placement.” Carrie Ann: ‘It was like sugar and spice and everything nice. Judges Scores: Carrie Ann: Kaitlyn, Derek: Justina, Bruno: Justina

Nelly and Daniella vs. Skai and Alan performing the jive to “Cup of Life” by Ricky Martin.

Judges Comments: Bruno: “I have to say, I was very distracted Nelly because I actually never looked at your feet. You give me an inferiority complex, who is your trainer, give me the number. Loosened up, ready for action. Skai with the rhythm you didn’t have a foot wrong, very effective.” Carrie Ann: “That was non-stop action, you are both in it to win it. Nelly the shirt off, come on! This was a new school vs. old school.” Derek: “It was like a boxing match, you were both on fire and busting out the tricks.” Judges Scores: Carrie Ann: Skai, Derek: Nelly, Bruno: Skai

AJ and Cheryl vs. Johnny and Britt performing the salsa to “Wake Me Up Before You Go-Go” by Wham!

Judges Scores: Carrie Ann: “That was by far the harder of the dances. You both did great as usual, these were great matchups because they are all tough to call. Johnny your technique was really great tonight, all your lines are strong and really strong. AJ you were non-stop tonight.” Derek: “It was difficult, the first half went to Johnny, the second half went to AJ. I don’t know which way it goes.” Bruno: “Both were excellent, one had an edge of sharpness, the other was clarity and precision.”  Judges Scores: Carrie Ann: Johnny, Derek: AJ, Bruno: AJ