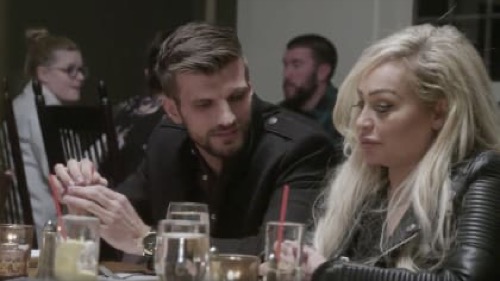 Tonight on TLC their new reality show Darcey & Stacey premieres with an all-new Sunday, September 6, 2020 episode and we have your Darcey & Stacey recap below for you. On tonight’s Darcey & Stacey season 1 episode 4 “Unfinished Business,” as per the TLC synopsis “Darcey takes some risks with Georgi and about making a big decision that will affect the twins; Florian needs to prove himself and make amends with Stacey again.”

Stacey goes outside because Florian walked out on her and her friends because they brought up the photos on his social media account. Reina goes to see him and says her jaw dropped when she saw them. He tells her that he is sorry, he already told Stacey is sorry and he loves her. Stacey tells her friends to put it to bed, he has been dealing with this since he got here. When alone, Stacey tells Florian that they don’t sugar coat things, he is going to have to be accountable if he does something wrong.

Darcey is cleaning out her car, and cleaning up her life’ getting rid of the junk and dirt. She says she is ready to start a new chapter, she wants to be happy for once. She listened to once the therapist and it helped her tremendously. For now, she has rescheduled her date with Georgi. Although she looks forward to it, she wants a fresh start and she wants that for Stacey too.

Darcey and Stacey meet together at the nail bar, they both get pedicures. Stacey asks Darcey about the therapist, she says it went well, she felt like the therapist got her; she is ready to move on, she is motivated and excited. They talk about their company, and that love and their relationships got in the way, they got lost. Darcey says they should go to LA, Stacey agrees and says she will bring Florian with her.

Florian goes shopping at the grocery store to find strawberries to surprise Stacey. He then buys a whole bunch of rose bouquets, he wants to say sorry to her. Meanwhile, Darcey goes ice skating with her daughters, she wants to talk to them about LA. Darcey is so loud, one of her daughters tells her to stop embarrassing them. Then she tries to show off, doing twirls and falls down. They all move to a table and sit down for a bit. Darcey tells them that she is going to LA in a few days, to check out schools, apartments. But, she tells them that they come first and she only wants to do it if they want to. The girls love the idea, they want to live near the beach.

Her daughters are happy for her, they tell her it’s a go. Darcey is so happy, and relieved that the girls want to go. Now, they just have to get Florian’s approval.

Darcey is getting ready for her date with Georgi, they are meeting in a few hours. Darcey is excited because she doesn’t know what they are doing for the date, she is guessing that he wanted to surprise her. Georgi is sweet and Darcey doesn’t think it will be a toxic relationship. She knows what she wants, she just hopes he feels the same about her. In NY, Darcey is ready and about to meet him, she is in a car on her way there, and its raining.

Her exes were not romantic, and this time around she feels that he is. She is outside waiting for him, and she sees him with a huge bouquet of Bulgarian roses, he calls her beautiful lady. Georgi is thirty-three years old from Bulgaria. He has been in eight years working as a lifeguard. He was a model before. He and Darcey met on social media, then they met in Miami and everything is going well. Georgi offers to hold her bag, and she loves that.

Back at Stacey’s room, Florian is setting up the stage to make a romantic surprise for her. He surprises her with red rose petals everywhere and candles, she is feeling the love and looking forward to having fun. Florian brings out chocolate, strawberries, and cream. He tells her that he is sorry for everything. She says she really feels like he means it and he loves her, and he is sorry. She tells him that she loves him, but he has to know that her family and friends are always going to want to protect her.

Georgi takes Darcey to a restaurant, he is hoping that they have one amazing night together – he doesn’t just want to be friends with Darcey. They cheer with some red wine, Darcey looks very happy. She says that all her senses are attracted to him. He feeds her and she feeds him, and they both smile. Georgi tells Darcey that he wants to give her something, pure rose oil that contains thousands of roses inside.

He tells her that every time she puts it on she can think about him. Darcey loves the effort and time that Georgi put into their date, she tells him that this is the best date ever. Then he asks her if she is talking to other guys, she says no. He says he was dating someone for four years, younger than him, she didn’t know what she wanted, and he did, so they broke up.

She tells him that he is a good guy and thanks to him for letting her enjoy life. He asks when is their next date, she says she didn’t think the date was ending at the restaurant. She welcomes him to her hotel room. He kisses her and picks her up, takes her to the bedroom. In their, things start to get steamy and she asks him if she can get a special Georgie massage.